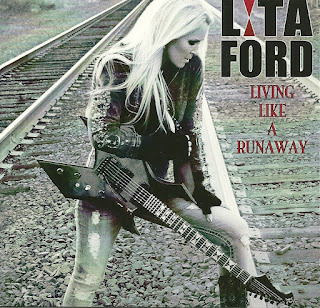 I'm pretty sure I am not alone when I say that I had completely written Lita Ford off after the ATROCIOUS piece of industrial crappiness that was 2009's Wicked Wonderland.  The ironic thing, at least for me, is that I was actually looking forward to Wicked Wonderland after the less-than-stellar Black, which found Ford going...*gasp*...almost grunge on us!  Imagine my horror when ...Wonderland was even worse!  In fact, that album is so bad I haven't even bothered to review it...and it darn near kept me from picking this disc out of the review pile as well.  I'm glad I managed to retain at least a bit of my "professional" interest, however, as Ford has managed to at least partially redeeem herself with her latest effort, Living Like A Runaway.


Don't let the album title fool you, because this album sounds nothing like a Runaways album...not even close.  Instead, what the listener is treated to here is a disc that reminds me a lot of Ford's best-selling album, Lita, with hints of Dangerous Curves and hints of her harder-edged past, a la Dancin' On The Edge.


To bring her career back on-line a bit, Ford brought Gary Hoey on board to help out with the songwriting and lead guitar duties, as well as all of the bass work.  Smart move.  Hoey adds a little extra oomph to the guitar playing on this album, but Lita manages to get her fair share of licks in as well, proving that while she may not be the greatest female axe-slinger of all time, she does have a certain level of skill in that department and is not exactly a slouch.  Her vocals remain very recognizable on this album, although she does tend to get a bit monotone in spots, especially when she seems tempted to be dragged back toward the dreck that was her last album (which I will get to in  a moment).  Hoey also did the production for this record and the sound of the project is overall pretty tight, somewhat polished, a little bombastic in places...in other words, pretty much what 80's Lita Ford fans would be looking for.

As far as the songs themselves, they run the gamut from the very strong rockers "Devil In My Head" and "Relentless", the punk-tinged "Branded" and the pop-rocker, "Living Like A Runaway", to the almost too-honest ballad "Mother" (more on this track in a bit), to the not-so-good "Love 2 Hate U" to the outright bad "Hate" which has elements that remind me too much of Wicked Wonderland.  "The Mask" would be pretty cool, I think, if it wasn't using a drum loop and if all of the song was performed vocally like the chorus, but for much of the song Ford slips back into that industrial-styled vocal delivery that just makes me shudder.  "Asylum" is a decent ballad, but not spectacular, although it is FAR better than the album closer, "Song To Slit Your Wrists By".  I have to seriously question why Ford chose to cover this song which was, of course, originally recorded by Nikki Sixx's side-project band, 58, and wasn't exactly a great song to begin with.  It is an odd choice, to say the least, and I am glad to see it slapped on at the end of the record so that it doesn't disrupt a fairly solid mid-section from tracks 4 through 7.

I mentioned that Ford has to fight the temptation to backtrack to the industrial sound she mistakenly dabbled in on her last album, and I think it is pretty obvious where she struggles to stay true to her original sound.  "Hate" is one such song where Ford's vocals become more monotone, her delivery is more stilted, and the song just doesn't flow well at all.  Her industrial take on "...Slit Your Wrists..." again shows that while Lita understands what her fans want, she can't help but mess with the formula, even if the product is not really worthy of being included on this album.

Lyrically, Ford seems to be taking chunks of her life and painting a broad, semi-autobiographical story throughout much of the effort.  While the title track is more of a nod to her past band than it seems to be a story of her own life, there is no doubt where the inspiration for "Mother" comes from if you have followed the storyline of her bitter divorce from Jim Gillette (lead singer of Nitro) and their custody battle over their children, whom Ford claims have physically attacked her due to Gillette's mind-controlling actions (her words in several interviews).  Incidentally, Ford also says that Wicked Wonderland  was as much Gillete's fault as her own and she has distanced herself from that album, as well as Gillette.  Not taking sides here, as I have no clue as to what really happened, but it is obvious from the lyrics to "Mother" that Lita is EXTREMELY angry about the situation, very hurt, and, it seems, also cares very deeply about her children.

While not as raw as her first couple of solo records, and not as poppy or hit-filled as her most popular albums in the late 80's/early 90's, Living Like A Runaway is likely to be very popular with her hardcore fans.  There is no big, "Kiss Me Deadly" or "Close My Eyes Forever" here, but several tracks are among the better half of the material Ford has ever released as a solo artist.  She has even returned to her signature style and look with the ripped jeans, the boots, leather jacket, and, of course, the long bleached-blonde hair.  While there may not be an MTV to strut her stuff on now, she is out on the road with Poison and Def Leppard this summer, and I am sure Lita Ford will be determined to show that she has as much substance as she does style when she hits the stage.  The new album gives here a couple more pices of ammunition to back up that claim.

Rating:  Rock this to an inconsistent 6.5, but there are several crankable moments here...

Back To Reviews Index
Posted by arttieTHE1manparty at 12:53 AM