CRASHING BROADWAY "The Words Crossed Out" 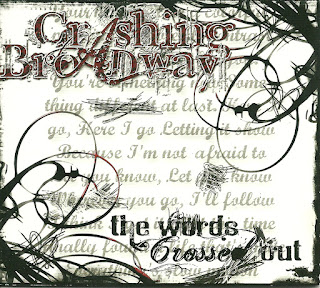 Hailing from Tupelo, Mississippi, Crashing Broadway is a young, modern rock outfit that combines much of the radio rock sensibilities of the day with a definite melodic bent that many more old-school AOR and melodic hard rock fans are likely to find to their liking.  I'm not trying to say anyone will mistake this combo for a newer version of a Sunset Strip band, because they won't; there is far too much modern sound in the way the band approaches their music, especially with the programming and synthesized strings used fairly liberally throughout the album.  However, there is an old soul feeling to much of the music on The Words Crossed Out, one of the better indy debuts I have come across in some time.  Perhaps it's because these guys write songs about normal life and not abstract ideas that lose the listener.  It's an interesting approach more bands might be well-served to use...

The album starts off with the most radio rock friendly track on the disc with "Crutch", which would play perfectly well alongside the Saving Abels, Evans Blues, Breaking Benjamins, and Shinedowns of the world, even if they are not quite as heavy as a Shinedown or Evans Blue.  Likewise, the truly sang, not screamed, melodic-yet-crunchy "Always Angels" or the snarky "Maniac" are likely to find a home on satellite radio at some point, or perhaps in an edited-for-language version on some of the more gutsy rock stations across the country.  On songs such as these, Kacye really gets to show the power and tone of his youthful voice, showing remarkable control and range belying his age.  This vocal skill is also really showcased on ballads such as the very strong, "Best Of Me", which has radio AND video hit written all over it, and album closer "Love Passes Away".  "Freedom To Choose", which the band dedicates to American troops when they are performing it live, is another outstanding rocker that should garner the band airplay at some point in the near future, and "Little White Lies" is the most aggressive, full-on rocker on this collection, going for an all grit-and-guitars approach rather than filling in the gaps with keys and strings and such.  The end effect is a good one, as this track is one of my favorites.

Despite their youth (I'm guessing the average age of the band when they recorded this album couldn't have been even 25...), it sounds like Crashing Broadway has been writing and playing together for some time, as they are a surprisingly tight sounding outfit with no one person or instrument overpowering the other. The guitar tandem of Swinney and Timms provides a nice combination of crunch and distortion mixed with melodic solos that should keep modern rockers happy for quite some time, and the backline of Riggs and Hubbard provides a solid, if not overly complicated platform upon which to craft these songs.

There are a couple of tracks that I don't get into as much as the others, but even these aren't bad.  "Slow Motion" is a bit too poppy for me, although Kacye again gives an impassioned vocal performance on this song.  "Back To Low", is a decent enough track, but it sounds like a rip-off of a Skillet song to my ears and doesn't have the same original feeling that most of the other songs here do.

While I could go on a bit more about the album, I think it is worth noting that Crashing Broadway really sold me on their skill and energy when I had the opportunity to catch them live at Sculley's Shooters in North Platte, NE earlier this month.  Kacye pull off his vocals in a live setting with every bit as much power and passion as he does on this album, and the energy of Riggs and Timms, especially, is infectious, to say the least.  Crashing Broadway was unrelenting throughout the majority of what turned into a nearly two-hour long set comprised of songs from this album as well as covers of such diverse acts as Tom Petty, Bon Jovi, Rage Against The Machine, and others.  One can only hope that the band, which performed as a four-piece on this night, can pull this energy, excitement, and diversity together on their next album, which I am anxiously awaiting.  In the meantime, if you get the chance to catch Crashing Broadway in the live setting, do so without hesitation...and pick up The Words Crossed Out while you are there.

Rating:  It's very possible I've been biased by meeting the band and seeing a live performance, but I would encourage readers to rock this at 6.5 with the high points far outweighing the few lesser moments on this debut.