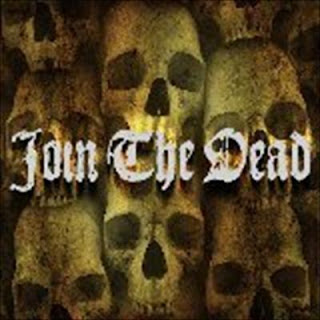 While not normally the style of music covered here in Glitter2Gutter, Join The Dead made me sit up and take notice when the EP arrived in my mailbox.  Playing a rarely utilized, under-appreciated Bay Area thrash style, Join The Dead is the closest thing to a Christian metal supergroup, with guitar player Phillips having previously performed with Deliverance, Fasedown, and The Sacrificed, Kronyak also having been in Deliverance, and White previously fronting the lesser-known Decadence.  From note one, all the way through the end of this all-too-short EP, Join The Dead treats the listener to a tasty sonic assault that will leave fans of old-school Testament, Exodus, Forbidden, and even older Metallica, grinning from ear to ear as they threaten to snap their neck while moshing around the room!

Fans should appreciate the lyrical content which delivers a Christian message without giving listeners a Bible beating across the forehead, and White's vocals are easily understood and powerfully delivered.  With a tone and style that at times reminds me of a younger Chuck Billy, I really like the phrasing that White uses and the way he half-snarls, half-barks his lines in places.  Equally entertaining for me is the guitar work of Phillips, whom I have always enjoyed in Deliverance and Fasedown.  He brings a bit of a Deliverance feel to the guitars on my two favorite tracks here, the pummeling album opener "Out Of Breath", and the speedy "Mask Of Fear".

The drumming is an interesting feature here, as a couple of people I have chatted with get the impression that "ED" actually stands for electric drums, which I guess is a possibility.  Regardless, there is some absolutely crushing drumming on this EP, so if these are programmed drums, kudos to whomever did the programming because it is top-notch.

Thrash fans should find plenty to enjoy on this short tease of an album.  There will be a limited edition release which will feature an additional 13 tracks including some live material and and demos, so lucky fans who are able to snatch that one up will get the chance to hear even more from this band that I think has a very solid future should they decide to go forward from here.  The cool thing about those bonus tracks, at least for me, is that they include performances by some other huge names from the Christian metal scene, such as Greg Minier and Jim Chaffin from The Crucified, and Jimmy P. Brown II from the mighty Deliverance!  To see if you can snag one of these, head over to www.roxxproductions.com and check out their store.

Rating:  Metalheads celebrate and crank this offering to a great 8.5 while hoping that there is more from these thrashers in the not-too-distant future!

Back To Review Index
Posted by arttieTHE1manparty at 5:02 PM