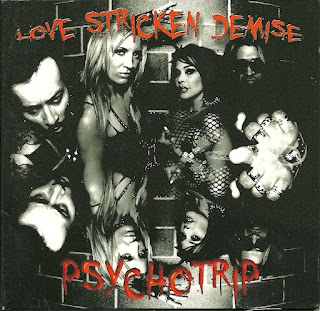 Love Stricken Demise is an interesting collaboration of talent, largely centered around the former American Idol finalist, Nikki McKibbin.  Although not a founder of the band (that distinction falls to Billy Blair and Rico), it is hard to deny that a lot of the attention this band will receive is going to be due to the curiosity of the reality television sector.  Of course, Blair is no stranger to a lot of people, either, as he is something of a "movie star", if you will, having appeard in Jonah Hex and Machete, most recently.  So, I would imagine that the fame of a couple of members could be a good thing, but you still have to have the goods to back it up if you are going to make it past being a one-album or one-hit wonder.

I don't think that is going to be an issue with Love Stricken Demise.

On this little four-track EP, McKibbin and her pals Blair, Rico, and bassist Holly Wood (seriously, I can't make this stuff up...) put together a teaser of what they are all about.  And what exactly is that?  Well, taking things a step beyond the typical radio rock format, Love Stricken Demise dips their toes into multiple styles here, with the album's opener and title track, "Psychotrip" being a bit more glammy in its approach than the rest of the EP.  To me, the most noticable thing about this track, or any of them, to be honest, is the brutal drum assault that Rico lays on the kit!  This guy just flat out pounds his drums into submission on every one of these four tracks, regardless of the tempo or style.  McKibbin is also very noticeable here, as well, as her vocals instantly set her apart from the Evanescence/Halestorm/Lacuna Coil sounds that a lot of modern rockers seemingly go for, and chooses instead to use a deeper, dare I say more sultry sound in her delivery.  I'm not sure that McKibbin sounds like any one particular singer, but more like a combination of Joan Jett, Stevie Nicks, and maybe even Janis Joplin in the way she uses her voice.  The really odd thing, at least for me, is I like this approach even though I am NOT a fan of Nicks or Joplin by any stretch.  Go figure.  By the way, Blair rips out a pretty tasty solo on this one and the overall guitar work throughout the album, including some pretty cool sleazy tones, left me pleasantly suprised, to be honest.

The second track here, "Celebrity High", is also the weakest, in my estimation.  I just don't care for the pre-chorus or chorus at all, as it sounds disjointed.  The topic of drug abuse and rehab is a good one, especially with the approach the band takes with it lyrically, I just don't care for the delivery on this more hard rock-than-metal track.  Not terrible by any stretch, just not my cup of tea overall.

"This Life" is my favorite of the four here.  Taking more of a bluesy-classic rock approach than anything else, this is something I would LOVE to hear this band tackle on a full-album scale as I think they pull it off excedingly well and the style and approach really fit McKibbin's vocal delivery.  Once again, Rico apparently has something personal against his drum kit, and  he and Holly Wood lock down a very solid rhythm section here for Blair to riff away on.  Great song that I would like to hear a lot more of.

The album closer takes us almost full circle, again treading on metal territory, but with a punk attitude.  Once again Blair steps up with some very solid guitar work, showcasing his ability to play at a breakneck tempo, and while not doing anything earth-shattering, leaves little doubt about his skill and his inclusion in the band as something more than just a "name" to draw attention.  Likewise, McKibbin cuts loose vocally a bit more here than anywhere else, really bringing a metallic bite to her rasp.

The songwriting needs some polish, and the band likely needs to pick one specific style and focus on that, but this is not a bad EP by any means, especially as an introductory tool.  Being released on the Down Boys Records label (as in members of Warrant) is a nice boost as well.  I find it interesting that in the band's bio, Blair claims to have been a fan of Warrant since the Dirty, Rotten, Filthy, Stinkin' Rich days, as you can kind of hear a bit of that sleazy glam attitude in some of his playing here.  Also, I have to say it because you all know how I feel...LOSE THE CARDBOARD SLIPCASE!!!  There...I feel better now.

A solid introductory EP that really only has one weak track on it.  As such, I think it is safe to say that Love Stricken Demise has very solid potential and I look forward to a full-length release in the not-too-distant future.

Back To Reviews Index
Posted by arttieTHE1manparty at 2:38 PM