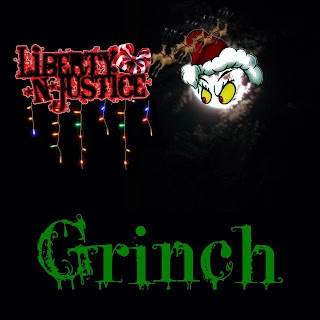 (c) 2012 LnJ/Roxx Productions
1.  The Grinch
Justin Murr--Bass
David Cagle--Vocals
JK Northrup--Guitars
Eric Rango--Keyboards
Michael Feighan--Drums
Just in time for Christmas, Liberty N Justice have put together and released their first song as a full band!  However, don't let the fact that this is a humorous Christmas song fool you, as the band flexes its muscle with this fun little number.  Of particular note are the powerful vocals of Mr. Cagle, who has just enough grit to his voice to really drive this song home, as well as the guitar work of JK Northrup.  I really don't know what else to say other than that Northrup is an absolute BEAST on the guitar and how this guy never got tagged with the "guitar god" label back in the 80's and early 90's is anyone's guess.  Top notch performances, crisp production...AND A FREE DOWNLOAD!!!!  What more can you ask for this Christmas?!  Just jump over HERE, fill in a couple of blanks, and "The Grinch" will be rocking you around your own Christmas tree, regardless of if you are on the naughty or nice list!  And, hey...if you like what you hear, tip the guys a buck or two to help make more music available at a future date!
Rating:  Cranked FULL of holiday cheer!  Get it before it's gone!!!
Merry Christmas!!!
Back To Reviews Index﻿
Posted by arttieTHE1manparty at 7:15 PM