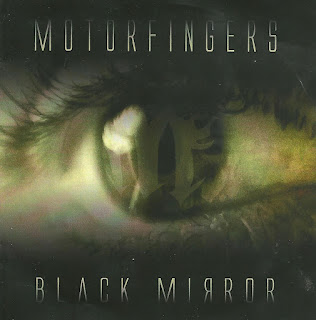 (c) 2012 logic(il)logic Records
Andrea "Spy" Spezzani--Guitars
Max Barbolini--Guitars
Claudio "Clay" Corrado--Vocals
Mauree "NOX" Novelli--Bass
Alex Gualdi--Drums
Hailing from Modena, Italy, Motorfingers is one of the most recent additions to the slew of talented bands coming out of Europe.  Like many of their contemporaries, Motorfingers combines and obvious love for the Hollywood scene, albeit the more sleazy underbelly side, with an appreciation for modern production technology and a dose of today's hard rock sound.  The result is an definite contender for Glitter2Gutter's Top 12 of 2012!  This is a seriously good, extremely solid effort that I have not tired of since first popping it into my CD player!  Quality material, talented musicians, and a singer who does not attempt to sound like everyone else out there in the New Wave of European Glam and Sleaze movement, gives Motorfingers a gritty, dirty edge that fans of Guns N Roses, classic Aerosmith, Dangerous Toys, and more modern bands like Nasty Idols and Crashdiet, will appreciate.
I will be honest that I was a bit concerned for the album as a whole when I heard the vocal approach taken on the opening track, as there was more of a modern slant here than I was hoping for.  Oddly enough, it is really only on this track that this vocal style is used and the rest of the album is stronger for it.  I might not even have noticed so much had this track been buried lower in the tracklisting...say, down around track seven or eight, and "Dust Over Stone" was given the chance to shine as the lead in for this album.  From this point on, solid songwriting, excellent guitar work, and a generally hard-rocking, uptempo approach keeps this album "motoring" along.  The previously mentioned "Dust Over Stone" is a great example of the guitar prowess displayed on this effort, with equally talented displays being put forth on tracks such as "Lost" (which throws a HUGE nod to bands like Iron Maiden with its chorus), "Mad Crime" and one of my personal favorites, "Out Of Control".   "Fallen Brother" is the other true highlight for me, as this is a solid, emotion-laden ballad that shows a depth that many bands seem to be missing from some of their slower tunes.

If I had to pick an track that really didn't do things for me (outside of the opener), I would probably have to go with "In My Dreams" which drifts too far into the modern radio rock sound for my liking.  Now, I am NOT against the modern hard rock sound, as readers of this site know, but I don't like it when a band seems to jump styles, which is what happens here.  It sounds like the band makes an obvious stab at radio with this song, which is understandable, but it just messes up the flow of the album, at least for me.  The track has a fairly catch chorus which sure sounds like the band is singing "Captain America!", but I don't really see how this would fit the rest of the song, and the musicianship is top-notch, but I just don't feel that it goes with everything else here.  I don't skip the song, but I don't skip TO it, either.  To be fair, if the band had done an entire album in this style and with this approach, I think it would be a fine effort as well, but I appreciate the sound and style that the rest of the album takes without this detour.

This isn't a perfect album, but it is definitely well worth picking up, especially if you are a fan of the modern sleaze sound coming out of Europe today.  It is a bit shorter than I would have liked, especially with the opener being one of the low points of the disc, at least to my ears.  I cannot comment on the packaging of the album as my copy is a promo copy that, despite the inclusion of the front cover artwork, utilizes the interior as a press kit for media outlets.  As such, I have no idea if lyrics, pictures, or credits are included, BUT, logic(il)logic Records tends to have decent packaging for their releases.

Rating:  Crankable, no doubt, but I just feel like there could have been a bit more.  Still, an 8 for a debut album is a solid first effort and possibly enough to make our year-end list!

Posted by arttieTHE1manparty at 10:31 PM