TWO-BIT THIEF "Another Sad Story In The Big City" 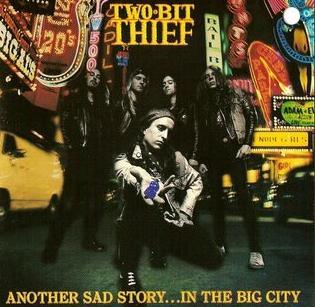 (c) 1990 Combat Records
Andy Andersen--Vocals
Chris Scaparro--Guitars﻿
Ron Shipes--Guitars
Rick Strahl--Bass
Eric Brecht--Drums
San Fracisco was the home of this extremely overlooked sleaze act from the late 1980's.  Perhaps that was largely due to the fact that San Francisco was more well-known for their thrash metal acts than anything else.  Considering the fact that several members of this band were in a thrash act that didn't quite make it, you would think that maybe they still had a fan base that might cross over, but sadly that was not the case and Two-Bit Thief is one of several excellent bands that are relegated to the "Who Are These Guys?" bin at your local used CD store.  If you happen to stumble upon Another Sad Story In The Big City, however, I strongly encourage you to pick it up.  Sleaze fans will not be disappointed in what they feast their ears upon from the very first spin!
One thing of note with Two-Bit Thief is the fact that these guys play their sleaze fast and loud....with an emphasis on fast.  It is obvious that the speed/thrash thing was still coursing through their veins when Two-Bit Thief put this album together because it is one non-stop break-neck track after another with only the quasi-hit single, "Broken Hearts", slowing things down at all, and this track is still a long way from ballad territory.  Even Johnny Cash is given the sleaze/thrash treatment on the band's ripping, "Folsom Prison Blues".  I like to tell people this band sounds like Dangerous Toys mixed with LA Guns with the love-child of Taime Downe from Faster Pussycat and Phil Lewis of LA Guns doing the singing with a sore throat...all while on speed!  Honestly, I think that's a pretty fair description.
The guitar work on this album is of special note, as I think Scaparro and Shipes made a formidible rhythm/lead tandem, with several solos dripping with that southern-fried slimy sound, such as on the snark "Love/Hate".  It's not so much about flash and flair with these guys as it is about attitude and grit, which is cool, as 1990 was about the time too many of the hair bands started to all sound the same and oversaturate the market.  Had more bands gone the gritty, grimey road that Two-Bit Thief chose to travel, it was possible that the scene may have survived a bit longer, regardless of what was happening in Seattle.
Stand out cuts would have to include the album opener, "City Boys", the cover of "Folson Prison Blues", the LA Guns-esque "Industry", "Hard Times", and one of the cooler tracks to come out of the scene (in my opinion), "Desperado" which has an AWESOME chorus breakdown that I absolutely love!  The cowbell intro of  "One Sad Day" kicks off another LA Guns-inspired track that is also one of my personal highlights from this underrated disc.  At times the disc does suffer from a bit of sameness, as I think the speed with which the band delivers their sleaze starts to run the songs into one another.  One or two more mid-tempo numbers would have broken things up a bit, but I'm not one to complain that a band rocked too hard and didn't throw in enough ballads...but one true ballad may not have been a bad thing.
I'm not going to tell you this is the best album ever crafted, but it is one of the better albums you have probably never heard...or at least that you haven't heard in a long time.  If you own it, dust it off and see if you don't plan to do so more frequently, and if you don't own it, it generally isn't too hard to come by for under $15 on eBay or Amazon.
For your listening/viewing pleasure, here is the band's mini stab at fame:
Rating:  Overlooked, underappreciated, and worth a second listen, crank this to 7.5.
Back To Reviews Index
Posted by arttieTHE1manparty at 7:28 PM