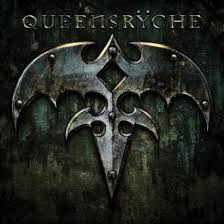 (c) 2013 Century Media
Todd La Torre--Lead Vocals﻿
Michael Wilton--Guitars
Parker Lundgren--Guitars
Eddie Jackson--Bass
Scott Rockenfeld--Drums, Percussion, Keys
Round 2 of "Ryche vs, Ryche" has been launched, with the Tate-less version releasing their first album since the ugly divorce.  This version of the band features three of the classic line-up members in Wilton, Jackson, and Rockenfeld, along with Parker Lundgren (who oddly enough was married to Geoff Tate's step-daughter and played on Tate's solo album), who performed on the Dedicated To Chaos album, the last by the united Queensryche, and new frontman, Todd La Torre, who formerly fronted Crimson Glory.  Got all that?  Good.
The album itself consists of 11 new tracks, along with three live versions of classic Queensryche numbers on the deluxe edition of the album.  As far as style goes, Queensryche combines elements Rage For Order, Operation: Mindcrime, and Promise Land, with some updated elements mixed in as well.  Right from the start, it is clear that this version of the band is going more for retaining the original fanbase and welcoming back those who lost interest in the band somewhere around the Hear In The Now Frontier time frame.  The album's opening track, the atmospheric "X2", gives the listener a bit of that Mindcrime feel, establishing the band before La Torre sings a single note.
When La Torre does leap into his contributions, the feeling that this album should slot in somewhere between Mindcrime and Promise Land really kicks in, as La Torre is a dead-ringer for Tate in his prime.  We aren't just talking tone and pitch, we are talking phrasing, presentation...everything.  I know people hate to hear the word used, but "clone" is the perfect word here, because that is exactly what La Torre is here, and throughout the record.  Compare what he sounded like on his Crimson Glory records, and what he sounds like here, and there is definitely a difference.  Now he sings like he's a member of Queensryche, not like he's Todd La Torre.  Does that make sense?  There is no escaping the fact that La Torre is trying to sound like Geoff Tate.  Nowhere is this more obvious than on the second single from the album, the Lundgren-penned, "Where Dreams Go To Die".  Listening to the way La Torre builds up to the chorus, there is simply no way to deny La Torre's intents to replace Tate rather than to leave his own imprint on the band.

One area that this album really bests Tate's album is on the classic cuts.  While this album's classic songs are live renditions, it's obvious that this version of the band has a firmer grasp on what they are trying to accomplish.  Where Tate's band altered the layout of the songs a bit, changing the structure here and there, this version doesn't do anything to mess with the greatness of the past.  This is especially evident for me on "Queen Of The Reich", which sounds almost exactly like I remember hearing it live so many different times throughout the years.  I guess that while is likely sounds like I have bagged on La Torre for ripping off Tate's style I would have to say that in the instances of the classics, his ability to project Tate's style and sound is a benefit rather than a hindrance.

There are a couple of stand out moments on this record, at least for me.  The first would be the lead single, "Redemption", which sounds like a heavy Journey song more than it sounds like a Queensryche song.  There is just such an arena rock quality to this song that I don't know what else to compare it to.  And you know what...I like it!  In fact, I think I would have liked to have heard the entire album take a bit more of this slant, as it would have represented the band moving forward rather than trying to sound like they were reaching back.  I know many will disagree with this, but for me, any attempt to make some sort of change would be welcome.

The other moment that really jumps out is the eerily reminiscent "A World Without" which sounds like it could have been lifted off the Operation: Mindcrime cutting room floor and given new life.  This is a GREAT song, and probably the best thing they have released since the Promise Land record.  Definitely slower in tempo than nearly everything else here, this moody song again showcases La Torre's uncanny ability to perfectly mimic the way Tate would phrase his vocals, but the haunting music is the best part of the track, at least for me.  Kudos to the band for recalling how to put together a truly great song!

So, it seems I'm contradicting myself with my favorite tracks.  On the one hand, I say that I would like to see the band move forward in some fashion, such as they did with "Redemption", while on the other hand I talk about loving how they were able to move backward 25-30 years and recapture the glory years with "A World Without".  So where do I really stand?  It's tough for me to separate the two, really.  And I think it's because this album was SO hyped, SO blown up by people in the Queensryche camp, SO massively built up by the Tate-haters of the world, that I don't think it stood a chance of living up to the hype, regardless of which direction the band went.
In the end, this is a very good record, with some excellent performances both musically and vocally, with outstanding production and above-average songwriting.  It is not amazing or life-changing, it does not make anyone forget the greatest moments of the original, unified band, and it does not make anyone want to burn their Tatesryche album that they picked up earlier in the year.  La Torre is a great Tate clone and I have no doubt that he can pull any song from the band's catalog and sing it note-for-note perfectly.  However, there is just something missing here.  Some of the magic is gone.  And while a lot of people will say that the magic disappeared quite some time ago, these are also the same people who claimed that La Torre was going to bring back what was lost.  He doesn't.  He tries but you can't replace greatness by mimicking it.  Again, the record is very good and I listen to it frequently, but my bet is that with the passage of time, Empire, Operation: Mindcrime, Rage For Order, and Promise Land will supersede this album as far as plays go.

So, I guess the final question is going to come down to this:  is it better than Frequency Unknown?  It is, but just barely.  Neither is horrible, and neither is a world-beater.  For me, the real difference is that La Torre sounds more like Tate than Tate does on the classic cuts that each version of the band chose to include at the end of their respective albums.
Rating:  Crankable, but just barely.  Give it a 7.
Back To Reviews Index
Posted by arttieTHE1manparty at 2:51 PM