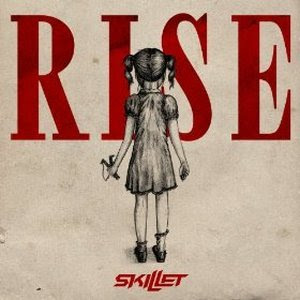 The latest album from platinum-selling Christian rockers, Skillet, finds the band moving into concept album territory.﻿  While maybe not as strongly tied together as some concept discs, Rise still strings together the story of a teenaged boy who is trying to figure out where he fits in the messed up world around him.
Musically, the album is going to remind most casual fans of the band of the last handful of albums that Skillet has released, such as Collide, Comatose, and most recently, Awake, as synthesized strings are intermixed in several songs and lead singer/bass player John Cooper trades off vocal lines on several tracks with the band's drummer, Jen Ledger, which are elements which the band has become known for as they have broken away from the rest of the Christian rock pack and have skyrocketed to mainstream fame.  However, upon closer listening (and after reading the liner notes) it should be noted that the band has incorporated such diverse instruments as a harp, dulcimer, mandolin...and get this...an accordion...so the band is not simply rehashing the same old, same old on this new record.   Granted, the heavy, distorted guitars are still the focus here, as they should be, and Ledger's drumming is as solid as it has ever been, so the rock is definitely as prevalent on this new album as it has been in the past.

One positive thing that I picked up on with this album is that Ledger's voice sounds more natural in spots (i.e. not as "auto-tuned"), and she pulls it off well.  Now, I don't know how the band will approach this in concert, but I suspect that they will try to start backing off the auto-tuning for her in the live setting as much as possible, as well.  And since this is rock and not R&B or hip hop...that's a VERY good thing!  To be honest, I never understood why the female vocals, whether from Korey or Jen, always seemed to come off as robotic sounding; maybe the band is working to "humanize" their female singer as well.
Some people are going to find fault with the band for not being overtly Christian with their lyrics, but I don't really have a problem with it, despite being a fan of Christian hard music.  I say this because, 1) it's a concept album and 2) I do think that a band that has broken onto the mainstream scene the way that Skillet has does a lot of good by bringing people to their shows and exposing them to their more Christian-themed lyrical material in the live setting.  While I believe evangelical music definitely has a place, I also think there is such a thing as preaching to the choir and failing to reach people who might not be as open to being "Bible beaten".  That being said, there is certainly nothing anti-Christian or non-Christian-friendly on this record, and if you read Cooper's lyrics as they are presented, his faith is definitely shown in a more real-world setting as he portrays himself as the story's main character trying to survive the fallen world around him.

There are several rock radio and satellite radio ready tracks here, with the lead single "Sick Of It" being one of the hardest rocking standouts.  "Good To Be Alive" takes the band slightly more in the direction of some of their earlier material, coming off like a U2-inspired 80's song, not rocking quite as hard and focusing more on the musical hook of the song, and it is done to very good effect.  "Circus For A Psycho" and "My Religion" find the band going back into a harder rock territory, and the title track, "Rise", ends up somewhere in between, effectively rocking out while also intermixing some orchestral moments as well as "news clips" talking about school shootings, war, and the crashing economy.  "Madness In Me" is in similar territory as far as style goes.  For those who were more into the Comatose sound, I anticipate you are going to like "Not Gonna Die" in particular, and "What I Believe" will likely tickle your fancy as well.  There are a few throwback electronic elements mixed in throughout the album, and keys are a bit more predominant in a few songs than on Awake, but never do they become the overpowering instrument of a song.
Personally, I would recommend getting the Deluxe Edition, as the three songs included there are worth the extra couple of bucks, with "Freakshow" being one of the two or three best rockers on the disc and a song I could definitely see as their concert opener.  "Everything Goes Black" is actually the ballad from the album that is the strongest, and the more mid-tempo "Battle Cry" has some of the most faith-based lyrics and is better than half of the album as well.  I'm assuming that that these became bonus tracks because they didn't really fit the "concept" theme of the rest of the album, but they are by no means throw away cuts.

There are still a couple of tracks that really don't go anywhere for me, with "American Noise" and "Hard To Find" being at the top of the list.  Album closer "What I Believe" isn't overly amazing, either, but the previous two not only are filler cuts, they also disrupt the flow of the album to a degree, which really set them apart for me.  All three are mid-tempo or slower and rather bland in their musical approach.  This was especially disappointing for "American Noise", at least for me, as I thought with a name like that we might be in for a really powerful rocker, but sadly that is not the case.

For me, there is a lot of good about this album, and I think it is definitely a better, more complete album than Awake, which I felt was fairly mid-tempo and samey outside of the small handful of harder-edged songs.  In essence, Awake was predictable.  I don't feel that way with Rise.  Skillet tries, with varying degrees of success, to keep all the elements of the "Panhead Nation" happy, regardless of the album the individual most readily identifies with.  The concept thread throughout the album is loose enough that all of the songs can stand alone if released as singles, yet comprehensive enough that when taken back-to-back-to-back you can follow along with the story.
Nothing here is likely to make any fans jump ship, and Rise may actually bring back those harder-edged fans who found themselves struggling to maintain interest in Awake.  I know a lot of reviewers have bagged on Rise as not being overly original or creative, but I am not one of them.  I do, however, feel that the first half of the album is definitely the strongest, although "Fire And Fury" is a great song off the second half that I find myself listening to more and more all the time.

Rating:  Crank this to 7, slotting just behind Collide and Comatose for me, but definitely ahead of Awake and Alien Youth.

Back To Reviews Index
Posted by arttieTHE1manparty at 5:10 PM