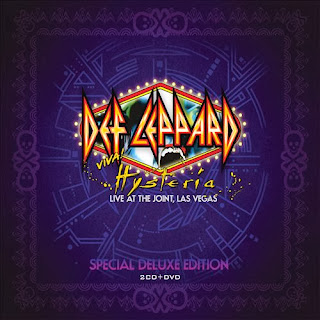 
For years...heck, for decades...people have been clamoring for a proper live CD from Def Leppard.  There were some random bootlegs floating around, and of course there is the live video from the Hysteria tour many years ago, but there had never been a proper live CD from the Boys from Britain through their first several studuio albums.  Then in 2011 they put out Mirrorball, which most people felt was not exceptional (I kinda liked it) and featured too many newer songs, not enough classics, and completely ignored some records all together.  Many people thought the band may never get around to releasing a GOOD live album.

Sadly, for those that didn't like Mirrorball, I still say they haven't released a good live album.

Oh, sure, Viva Hysteria: Live at the Joint, Las Vegas is a live album, but it isn't a good one.  In fact, I think it stinks.  I have read other reviews praising this record as "amazing" and "an incredible record", and I find myself having to ask if they have ever heard Def Leppard, ever actually attended a good Def Leppard concert, or just went through the talking points sent to them by Frontiers Records, because this record is FAR from "amazing" or "incredible".  For me, half of this album is unlistenable, and the other half is only a keeper because of the amount of rare material included.  Simply put, unless you are a collection completist, a rabid fan of the band, or someone who loves to collect garbage, there is no reason to own this record.

For the uninitiated, or those who didn't take the time to read the tracklisting, Viva! Hysteria is a live start-to-finish performance of the record-breaking album, Hysteria.  Included are both a CD and DVD version of the same show, as well as a second musical disc that includes songs culled from various albums, dating clear back the band's first release.  In theory, this seems like it would be a great thing, especially since so many of these songs aren't tunes that are usually tackled by the band in a live setting (at least that I have had the chance to see), and Hysteria was a game-changer for the hard rock industry, although whether as a positive or negative depends entirely upon your personal opinion of that record.  Again, in THEORY this seems like a great thing for the legion of die-hard Leppard fans out there.  But, no matter how great the theory was, the end result is something FAR from great.

For starters, Joe Elliott's voice is shot; there is no other way to put it.  His range is completely gone, especially on older songs like "Stagefright", or, most horrifically in my estimation, on one of the band's biggest songs ever, "Love Bites".  On most of the band's songs, he has to sing in such a low register it doesn't even sound like Joe any longer.  For several albums now, many people have speculated that his voice was pretty much manufactured in the studio to keep sounding like his old self, and the live setting pretty much exposes all of Joe's vocal weaknesses in one shot.  Not only can he not hit the high notes now, he can't hit half of the middle ones, either!

The rest of the band doesn't get a pass, either, at least as far as I am concerned.  They sound...bored.  I guess that's the word I would use.  And...sloppy isn't the word, so maybe loose?  The opposite of tight, as it applies to music.  There are just gaps in the music that shouldn't be there.  Some of the songs are played entirely too slowly, and none of them sound any closer to what is on the album than I have heard cover bands do.  I'm not kidding.  Phil Collen is probably the shining point as far as band members go, as he is still pretty much spot-on with his solos, and he looks to be in great shape and puts on a good show in the DVD.  And Vivian Campbell is talented, to be sure.  So why does this record just sound so flat and lifeless to my ears?  I just don't get what people are raving about when they hear this live record.

Now, I will give it a bit of a pass because of the second disc and the Ded Flatbird material that is included (see tracklisting above).  Some of these songs I have never heard Leppard play live, and I have caught them a few times now.  So, to the people who compiled this tracklisting, kudos; you are the lone saving grace of this record as far as I am concerned.  Especially cool is the inclusion of some VERY early Leppard (actually pre-Leppard) material in the Ded Flatbird performances, and the acoustic medley is the one musical high point as it doesn't rely on Joe's voice reaching it's former heights.

Look, I realize that many times the entire concert experience is what makes a show great: the music, the crowd, the lights, the energy, etc.  But when a band does a live recording that has NO energy, where the music is subpar, and even the crowd doesn't seem all that enthusiastic, it's kind of hard to get behind the record.for me.  Now, the DVD isn't bad from a visual standpoint, but the performance musically (and especially vocally) isn't saved at all by the video production.

I'm going to be honest in saying that it scares me a little bit that Def Leppard is reportedly gearing up for a new studio record because I just don't know if the band has it in them any longer.  I also don't like hearing that they plan to doin Viva! Pyromania in the near future, because that is, for me, one of the defining records of the early 80's hard rock scene.  Yikes!  Simply put, I don't that Def Leppard have put out a complete record since X, and I'm a member of the minority that actually liked THAT record.  Yeah, I know they will doctor up Joe's vocals, and I know that endless retakes and studio loops and layers will beef the guitars back up to where they should be, but this is a tired sounding band to my ears.  I hate that a band that I once considered one of the best around appears to be going out with a thud rather than a bang.  I can honestly say that I don't see myself ever shelling out the kind of money that Leppard commands for tickets now because I just have no desire to see a formerly great band limp around as a shadow of its former self.

Musically, Mirrorball DESTROYS Viva! Hysteria, with the track selection being the only thing that Viva! has over it's predecessor.  Just do yourself a favor and buy Mirrorball and play the studio version of Hysteria in its entirety to get a better representation of what this band once was.

Rating:  Turn it down to a 4.5, and two of those points are only awarded due to some of the rare material included.  This is simply not a good live record at all.

Back to Reviews Index
Posted by arttieTHE1manparty at 8:16 PM