DELIVERANCE "Hear What I Say" 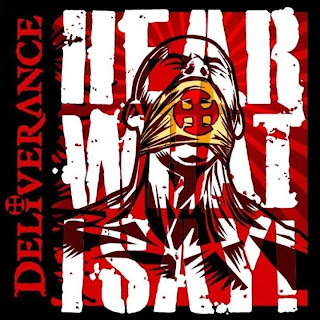 Normally, Glitter2Gutter doesn't stray into thrash territory, but in this case I will make an exception.  Having been a fan of Deliverance for more than 25 years, and being the co-Executive Producer of a Deliverance tribute album, I have a special tie to the band that I felt I should acknowledge as Jimmy P. Brown II and company make their final curtain call as a collective unit.  Hear What I Say, is the culmination of the band's incredible career and is, in my opinion, a fitting closing chapter on what has been an incredible book.

As has been the case with Deliverance since, oh, their third album, this is NOT Weapons Of Our Warfare Part II, nor is it a retread of the debut thrasher.  Rather, the new album is a combination of elements from Learn (my personal favorite Deliverance album), Assimilation, As Above, So Below, and Stay Of Execution, with hints of the thrashiness of Weapons... or What A Joke.  Note that I said "hints", because this album is NOT a full-on trash album, although it does have thrashy moments, especially on "The Annals of Subterfuge" and "Angst", but even these songs never become full-throttle thrashers like "Weapons Of Our Warfare" or "No Time", or other thrash classics from the Big D.

For the most part, the album falls more into the musical style of the last few Deliverance records, with Learn and Assimilation both being obvious points of reference.  "Detox" and "Pass", my personal favorite track here, both have definite Assimilation lineage, both carrying the same type of song structure, but not incorporating the industrial elements.  Other songs, such as my other personal fave, "Nude", have a definite Learn styled leaning to the music, taking on a more progressive modern, yet still heavy, sound.  "Hope Lies Beyond" sounds like it could have been taken straight out of the Learn writing sessions, as well, while "A Perfect Sky" has a more melancholy feel, much like the writing on the Camelot In Smithereens album, although this song is largely acoustic based and reminds me a lot of the music of Days Of A New, although Jimmy's soaring tenor adds a dimension not present with D.o.a.N.

Iron Maiden has never been a band that I equated with Deliverance at any time, as the styles really are not all that similar.  Queensryche, Fates Warning, and bands like that...yeah, I can hear that, especially on the later, non-thrash albums.  But Maiden never really popped into the equation for me.  That being said, the cover of "Where Eagles Dare" is done masterfully, with a thrash-esque drum intro, some excellent guitar work, and some lower-register vocal work from Jimmy.  Manny's bass is definitely present here as well, and it is evident that the band had fun with this song as there is an energy here that you simply can't fake.  It kind of makes me wish that Deliverance had attempted a cover album of influential music, or personal favorites, as I think a lot of songs could be given new life with the Deliverance treatment.

Lyrically, Jimmy goes a bit deeper and darker than on some previous efforts.  As I said before, the album is definitely more introspective and the social commentary is evident throughout.  While not blatantly religious, there is definitely a searching that is going on with this record, giving the listener a more mature take on spirituality and how we relate to each other and the world around us.  Take for instance the following lyrical snippet from "Pass":


"Ain't it funny how the comforts of home make us feel safe and secure...
We hide from family, the neighbors and pets and make friends with a computer"

Or these from "Nude":


"I close my eyes and see myself for that which I've become..
A selfish man, a pitied man...trying to please the world and myself
I hide in the shadows and in plain sight for all of you to see
The double, the triple, the other selves, condemned to hide who I really am."

Again, not your typical "Christian" lyrics, but I'm not sure what that label is even supposed to mean.  This is especially true of a band like Deliverance, who has really gone away from the chapter-and-verse types of lyrics for much of their last four or five studio albums, although there has never been a question (at least in my mind) as to where Jimmy's faith lies.

Do I have any issues with this effort?  Yes, bur they are minor.  This is not a perfect album, but it does come close.  For starters, I have little to no use for intros, a fact which I have made abundantly clear throughout my reviews on this site and in other places; I just don't think they serve any real purpose.  Second, if you take away the intro, the German version of "Detox", and the cover song, there are really only 7 new songs here, which is kind of a bummer considering the band will never (likely) record new material again.  But you know what...those are really and truly my only complaints, and really they both boil down to the same point: there are just not enough new songs for me!  If you are going to go away forever, you don't jot a short note, you write me a full letter, Jimmy!  Come on, my friend!

The production is excellent, the musicianship is top-notch, and Jimmy is very strong in his delivery.  The songwriting is also superb and introspective, often somber, dark in a couple of places, but undeniably Deliverance, especially toward the latter part of their career.

Rating:  If you're gonna go out, go out on top!  I'm not saying this is THE definitive Deliverance album, because that will depend upon your own personal preference as to the era and style of the band.  None of that takes away from cranking this to a 9, however.

Back To Reviews Index
Posted by arttieTHE1manparty at 1:02 PM