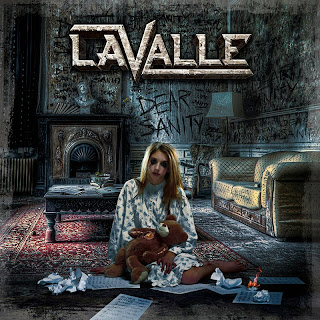 LaValle is a project that I had heard a lot about in the months prior to its release.  Numerous sites and press releases touted the fusion of guitar wizard Eddie LaValle with established melodic rock veterans Logue (Eden's Curse) and Ali (Frontline), combined with the powerhouse vocals of Schulz and the talented contributions of DelVecchio.  It was one of those deals where what I was hearing and reading was likely too good to be true, as no one seemed likely to be able to live up to the hype.

Boy, was I wrong!

LaValle is, as of this writing, quite possibly the best band I have heard all year, and Dear Sanity may be the album of the year.  It is really a nearly impossible task to overstate just how good this project is on all levels.  I was simply not prepared for an album of this magnitude to come from what, at least on the surface, appears to be a project band.  How could I know that I would be absolutely blown away from the opening vocals of the hard rocking "Fading Like The Sun" to the closing notes of the bluesy power ballad, "Wait Too Long"?  How could I have predicted that behind that very sleazy looking album cover was a CD packed full of some of the most perfectly crafted melodic hard rock I have listened to in the last decade?  Damn it...why didn't someone tell me?!  Oh...wait...people tried, didn't they?

Try as I might, I simply cannot find a song that I do not like here.  Now, I realize it may be a bit odd that I am actually trying to find a song to not like, but when I am reviewing an album that starts inching dangerously close to that 9-10 rating range, I find myself second guessing myself a lot, becoming overly critical at times, and looking/listening for even the slightest flaw.  I just can't find that with Dear Sanity.  I honestly can't find a single song to make a complaint about.

Album opener, "Fading Like The Sun" starts off with Schulz's powerhouse vocals setting the stage before LaValle's guitars come ripping through the speakers.  An up-tempo, driving number, this track immediately lets the listener know that this is not your average hard rock album.  The players here are true masters of their craft, not just in their performance, but also in their writing.  The hook and chorus here are just insanely catchy and I find that they stick with me for hours each and every time I queue up this album in my CD player or iPod.

"Scared To Love" follows this up with a bit slower, but every bit as powerful, performance.  By no means a ballad, this song has a bit of a Dokken-ish feel to it, but with obviously more updated production and a different vocal style.

"Don't Cry" is in a very similar stylistic vein, again very melodic, this time showcasing a bit more keyboard than the previous two songs, but not in an overpowering fashion (we all know I HATE that!).  LaValle still has plenty of room to shine with his guitar prowess, and this song has one of Schulz's top vocal performances on the album.

"One Day At A Time" is pure power ballad bliss...if that is your sort of thing.  A song that I feel is on par with some of the best material put out by bands like Giant, Unruly Child, and other 90's/early 2000's melodic rockers, this song has plenty of emotion with just enough keyboard to give the song a truly ballad feel without it becoming a bloated mass of whining, which so many ballads do.  This is the track that a lot of people steered me toward when I first sought out this album, telling me I would be a fan instantly.  To be honest, it actually had to grow on me, because I am not necessarily the biggest fan of the traditional "power ballad", as too often they are overwrought and sappy.  "One Day At A Time" does not venture into that territory, for which I am very glad.

"Cry Of The Wolf" may be my favorite song on the disc (rivaling "Fading..."), which sets me apart from a lot of people I have talked to, as this is never a song that seems to be at the top of other fans' lists.  I love it, however.  I think the structure of the song is a key to the greatness of the track, with a bit of a slower, more blues-influenced approach to the chorus, and some absolutely scorching lead guitar work from LaValle.  I also think the bass is a bit more prominent here than in some of the other songs, giving it, again, a bit of that bluesy feel I mentioned.  Love this track!

Without going into a track-by-track diagnosis of the rest of the album, it is safe to say that the rest of the album follows a similar, yet non-repetitive pattern of greatness.  The writing here is so strong that the songs flow seamlessly into one another, giving the project a truly fluid feel when listened to as a whole.  The musicianship is unmatched, in my opinion, and the mix is spot-on perfect, with no instrument overpowering the others, yet giving plenty of love to the band's namesake, Eddie LaValle and his amazing skill.

I find it odd that I had never heard of LaValle before, as I am a big guitar fan.  However, I spend more time on the hair/sleaze side of the spectrum (also mixing in healthy doses of thrash and modern hard rock) and not as much time on the melodic rock side.  If there are more albums that are at the level of greatness of this record (as well as the latest from AdrianGale, H.E.A.T., WET, and others) that DON'T bore me to tears with keyboard-heavy sappiness, I need to do some investigating!

In all seriousness, I am going to just go ahead and call it:  Dear Sanity will be the number one album for Glitter2Gutter for  2014 barring an absolute musical miracle being released in the next few weeks.  My one regret with this album is that it took me until November to get it, cheating myself out of a couple of months of musical happiness.  If LaValle releases another album, trust me when I say that I won't miss a single day if I have any say in it.

Rating:  Flawless.  "Dear Sanity" reaches the pinnacle of the Glitter2Gutter spectrum with a perfect 10.  Get it...get it NOW!

Back To Reviews Index
Posted by arttieTHE1manparty at 3:26 PM