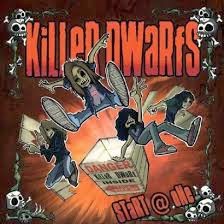 The Killer Dwarfs return with a brand new, 20 year-old album!  Yes, in what would seem to be an "everything gets to Canada several years late" joke, Canadian rockers, Killer Dwarfs have regrouped to release an album that was originally slated to be put out in 1993, but was shelved when the hard rock/hair metal scene was victimized by the mighty grunge machine (remember, the same thing happened with Tora Tora's Revolution Day album...).  It should come as no surprise, then, that this album sounds like it could be played right alongside Dirty Weapons or Stand Tall, as it was SUPPOSED to be released in that same time frame.

Despite the lag in time, the band did not lag in the technology department, as the master tapes were digitized and given some updating in the production department, so the album has a crisp sound and has been re-mixed to meet the same sonic qualities of releases of today.

Again, not surprisingly, the band sounds very much like they did back in the day, with Russ's instantly recognizable, high-end tenor layered over the top of a solid rhythm section and understated, polished-yet-never-flash guitar work.  The songs are solid and flow well from one to the next and are obviously not left-overs or B-sides from previous albums, as nothing here is throw away.  "Lonely Road" is a nice, uptempo rocker, as is "Solid Ground", both incorporating a relatively smooth guitar sound with little in the way of an edge.  Had the entire album been in this vein it would have been a nice record, but nothing overly remarkable.  However, there are several cuts that have more bite to them, such as "Psycho Circus" (not the KISS tune of the same name) which is a an edgy rocker with a simple, yet catchy riff and chorus, while the title track, "Start @ One" slows things down just a notch to mid-tempo range, but really showcasing the bass work of Ronald "Bad Ronbo Dwarf" Mayer.  Again, solid songs, but neither of these tracks, however, hold a candle to the two real show-stealers on this album:

"Sky Is Falling" has a grittier edge to the guitars with an undeniably infectious riff that runs throughout the track, giving it a melodic sensibility that, coupled with the stellar layered vocals, will likely draw comparisons to a band like older King's X.  "Down In Hollywood" is a sassy number that allows Russ to work more of a vocal range than his normal, just-short-of-Geddy Lee-high tenor, and again features some excellent guitar work from Gerry Finn.  From the rollicking opening riff to the locked-in-step bass and drum work, this is the type of song that drove the album Dirty Weapons to cult status, if not huge commercial success.  If and when the Dwarfs decide to record an album of all new material, I hope that two or three more songs of this style and caliber are included, as this the Killer Dwarfs style that I love so much!

"The Crowd" is a nice rock ballad with some strong vocal harmonies, especially on the bridge and chorus, and I really enjoy the haunting vocal approach Russ employs on "Adalina", especially during the chorus and bridge.  This mid-tempo track is another of the top three or four songs on this album, and  musically the song has a Dokken-ish quality to it.  "Walk On By" is a decent song, but drags just a bit and may be a tad long at over 5 minutes.

The packaging is extremely generic: a one fold digipack with no lyrics or pictures, and only minimal information and credits, but at least it's not a slipcase!  This has become something of the norm for small label and independent releases, so it's getting to the point that I don't even really notice these things any longer, or at least I don't get as offended by them.

All in all, this is a solid record and a nice return for a band that I had been missing for quite some time.  To be honest, I think this disc will do more for the band NOW that it would have 20 years ago, as it isn't quite up to the level of their biggest two albums, Dirty Weapons and Stand Tall, but it is a great "comeback" record...without truly being one.

The band will be hitting the road for select dates throughout North America this year, so if you get the chance to catch them live, I would highly encourage you to do so.  The band will be one of the featured acts at Skull Fest 2 in October.

Rating:  Crank this at a 7 and let's hope the band continues to move forward, because there is a lot to like here, even if it isn't the best the band has released in their long history.