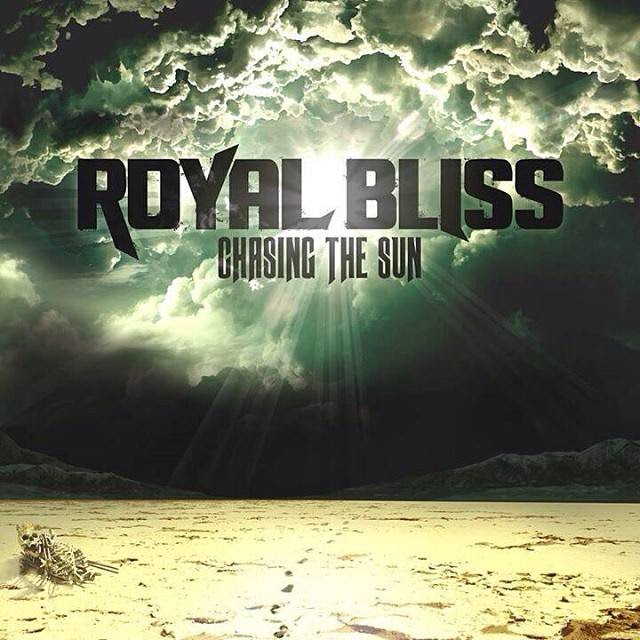 
Salt Lake City-based Royal Bliss returns with their first new album in two years with the much anticipated...at least by me...Chasing The Sun.  This album musically and lyrically is a direct follow-up to their amazing record Waiting Out The Storm.  Heck, even the title is a follow-up on this Kickstarter-funded project, so things are definitely headed in the right direction.

From the very first note to the very last, it is evident that Royal Bliss has found the sound and style that suits them best, and it works in every way on this record as much as it did the last.  Kicking off with the scorching rocker, "Welcome", the band finds themselves in top form.  Middleton's vocals, as is always the case, really set the band apart from a lot of the radio schlock rock that abounds today, and he is in complete control of this track from the second he cuts loose.  However, it is on the second track and lead single, "Cry Sister" that the band really nails things.  Building momentum from the lead-in bass line from now-permanent member Dwayne Crawford, "Cry Sister" is an incredibly addictive slice of modern hard rock with an infectious chorus and a powerful rhythm section that I think is one of the understated strengths of the band.  Were it not for another song, which I will get to in a moment, this would be my favorite track on the album and one that should be lighting up request lines and filling up rock radio playlists across the country.

Two more solid numbers follow in the sparse rocker, "Rock You All Night Long", and the more experimental sounding, quasi-ballad, "Dreamer" which features some keyboard/synth work that accentuates, but never dominates, the song.  "It Haunts Me" kicks things back up a notch, before my personal favorite track, "Drink My Stupid Away" steals the record.  Don't let the title of the song fool you, as this is not some rollicking party anthem...not at all.  "Drink..." is an insightful ballad that to me feels like the lyrical follow-up to "Crazy" from Waiting Out The Storm, with Middleton contemplating his loneliness.  Featuring some very nice piano work, a great melody, and truly emotional lyrics, "Drink..." may be the best song this band has ever done, and that is saying a lot, as their catalog is chock-full of great tunes.  This song, alone, is worth seeking out this album.  Shell out the $1.29 or whatever on iTunes to download it if you need further proof of the greatness of this song.

From here, "Alive To See" rips things wide open again with a huge guitar riff and the most aggressive music on the disc. The U2-ish, "Impossible" follows up, and while not my favorite track, it is certainly an interesting one that has never tempted me to hit the skip button.  It is definitely different from the majority of the work here, but I am betting that it is a great mood-setter in a live setting that could lead into either a rocker or a ballad.  "Turn Me On" is another up-tempo rocker with a bit of a nasty side and, although it never gets filthy or raunchy as far as lyrics go, the title alone leaves little doubt as to the subject matter here.  There is a particularly tasty guitar solo on this track, as well as some good-time piano rocking along, adding more proof that this is a band of musical depth not common in the modern rock world.

The album closes with the insightful, personal "Home", which, if you read the words, really feels like it completes a sort of lyrical trilogy along with "Crazy" and "Drink My Stupid Away", as it again talks about loneliness and being away from loved ones and the reason why the band does what it does.  The track also doesn't shy away from taking a swipe at the music industry and name-dropping Johnny Cash all at the same time, which is always a good thing in my book!  With lyrics such as "Yeah, so many people seem so fake, and the reason why they play, it ain't the same, cause they don't write their songs, just hit the tracks and play along...", can there be any doubt that Middleton disapproves of the current music scene?  No, I don't think so...

I'm not sure what the packaging is like on the market version of the album, as I actually received a promo copy with a plain white cover and all of the lyrics in a fold-out digipack.  (I snagged the actual album cover photo from the Internet for the picture above).  If this is how the package is left for the regular release, it is not my favorite format, but it is certainly better than the slip-covers a lot of bands seem to be going to, and the inclusion of the lyrics and song-writing credits is always a bonus for me.

It's too early to tell if this album will surpass Waiting Out The Storm for me, but I can guarantee you that I will give it every chance to supplant that album which has not left my CD changer in close to a year!  That being said, Chasing The Sun is an amazing piece of hard rock MUSIC with a soulful singer, actual guitar solos, great melodies, and some insanely catchy hooks.  Check back with me in a year and I'm willing to bet that this album will still be in rotation for me, right alongside its predecessor!  Oh, and if you get the chance, you really should check these guys out live, as Royal Bliss put on an energetic show that is hard to beat, especially in a smaller, more personal setting.

Rating:  Every bit the crankable 9 the previous album was!  Just a great, great record that I find myself liking more with each listen.

Back To Reviews Index
Posted by arttieTHE1manparty at 8:20 AM