FRAMING HANLEY "The Sum Of Who We Are" 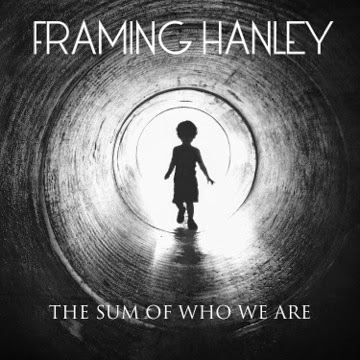 Framing Hanley returns after a hiatus of nearly four years with a new, Kickstarter-funded album of modern melodic hard rock.  Enlisting the aid of multiple producers, two different bass players, and four studio engineers, the band sought to break away from the cookie cutter sound of much of today's music scene without losing their own identity.  After all, this is not a new band we are talking about, as The Sum Of Who We Are is the band's third release now, but first for Imagen Records, and the title is an appropriate one considering how many people...including hundreds of fan-backers...were involved in getting this album released.

The album opens with a big-time, hook-driven rocker in lead single, "Criminal", which finds Nixon in fine vocal form.  Keeping things relatively restrained on the opening chorus, Nixon lets things rip on the chorus as the crunch of the guitars hits hard, layered over the punch of the drum and bass line.  One thing that is unique about this band in the current rock scene is the incorporation of three guitar players, which is definitely not the norm today.  This can be heard in the fullness of a song such as "Criminal" which just feels like it has been packed with enough notes for two or three songs, yet doesn't sound like a guitar wank-fest in the slightest.  There is a nice little guitar solo here, but most of the real work is in the rhythm guitars throughout the track.

"Twisted Halos" follows things up and is one of my favorite tracks of the album.  Taking almost an opposite approach to "Criminal", "...Halos" starts off hard before backing off just a bit, then rebuilding at the chorus.  Lyrically, this is one of the catchiest tracks as well, with the killer chorus line, "You know we are all a little wicked, Heaven sent and halos twisted."  Once again, a nice (but short) guitar solo is dropped into this track before the chorus punches its way back in.

"Collide" is a frantic sounding song with some killer bass work courtesy of former band member, Luke McDuffee.  I have no idea why the guy is no longer in the band (and I'm not going to sift through the internet dirt to find out), but his bass work here is excellent and I hope the band is able to find a full-time touring bass player that can pull this line off, because this is another of my favorite tracks here and one of the definite hits on the record.

If "Crooked Smiles" sounds familiar to fans, that is likely because it is.  The track was released as an album teaser...TWO YEARS AGO...and is presented here in the same form as the single.  Again, Nixon's vocals take center stage, starting off a bit on the more mellow, emotional side, before ripping into full-fledged screaming, blasting their way over the top of layers of distorted, crunchy guitars.  This seems to be something of a pattern for the band on this record, and it is used to great effect throughout.

There are a couple of tracks that are kind of the "odd man out" on this album, with "Simple Life" being the main culprit as it incorporates dub-step of all things.  While not the dominant sound on the track, there are trace elements of the electronic style found throughout the song, and while not horrible, this is simply not my thing.  "Science" also ventures into this electronic territory, and frankly, I don't get the current fascination/obsession with dub step.  Maybe my age is showing, but I could do without these two tracks, and I think the album would be a bit more solid without their inclusion, although they do, I suppose, show that the band is not above experimenting and not about to settle into a predicable pattern.

"Rollercoaster" gets this ship righted and headed into positive territory again, and the addition of the guest female vocals of Lindsey Stamey are a nice touch here.  Her vocals approach reminds me a bit of the style incorporated by Skillet, but without the auto-tuning effect.  Her trade-off with Nixon plays well and doesn't come across as forced in sound.  A simple, poppy, yet catchy, upbeat song, this is surely to gain a lot of spins from the band's younger fans and female fans alike.

"No Saving Me" brings the album back into a bit harder rock territory, incorporating some different effects on the vocals here in parts of the verses, but not to the point of distraction.  A ringing guitar tone resonates throughout the track, and once again, solid rhythm playing and a pounding drum line drive this uptempo rocker.

"Unbreakable" slows things down, dipping slightly into ballad territory.  It's not a terrible song, and Nixon's vocals work well here, but this is one time where the band sounds an awful lot like just about everyone else on the radio, and is one of the tracks that I could do without if I was given the opportunity to edit one or two out.  Not necessarily a skipper, it is definitely a track I have to be in the right mood to want to listen to, and that mood doesn't really come around all that often.  For my money, "Streetlights & Silhouettes" is a far superior, deeper, more emotional song, even if it doesn't fall 100% into ballad territory.  I really like Nixon's vocal approach here, and I imagine this is a song that will go over well in the middle of a live set, with more than a few lighters topping swaying arms in the crows (they do still do that, right?).

"Crash & Burn" is a solid, if unspectacular rocker, and "Forever Till The End" is the last hard-charging track near the end of the album.  Album closer, "Castaway", is a nice closer, giving the band a nice opportunity to put their melodic sensibilities on full display in a song that alternates between simple vocal-and-guitar-only moments, to more complex, driving rock aspects.  Not my favorite track, but certainly not the bottom of the barrel, either, it is a good way to bring to a close a solid, slightly diverse album that should have old fans smiling at the return of a familiar friend, and leave new listeners pleased with their purchase.

The packaging is a tri-fold digipack (ugh), but the cool part is the insert.  Framing Hanley gave their Kickstarter supporters name mentions inside the insert, and, for a large enough contribution, some fans actually had their picture included!  Maybe a bit cheesy to some folks, but to someone like me who has contributed to multiple Kickstarter projects, I think its a pretty cool, personal idea that I am imagining more bands will use in the future.  The insert does not contain any lyrics, but there is a large, fold-out picture of the band.  The digipack itself contains writing and recording credits along with individual band member thank-yous, as well as an additional band picture.

All in all, this is a solid effort that I am sure will put the band back on the modern rock scene in a big way, as multiple tracks here have break-out potential in the Octane rock world.  Definitely not looking to clone anyone that is currently on the radio, the band finds itself retaining their previous identity while managing to mature musically and lyrically, making The Sum Of Who We Are the best release of this relatively young band's career.  Hopefully they are able to take their show on the road this summer, in which case I would strongly suggest seeking the band out, as I have been told they put on an incredible live performance as well.

Rating:  Crank this to a very solid 7.5, with the best tracks here really pushing to make this effort an 8!

Back To Reviews Index
Posted by arttieTHE1manparty at 11:19 PM