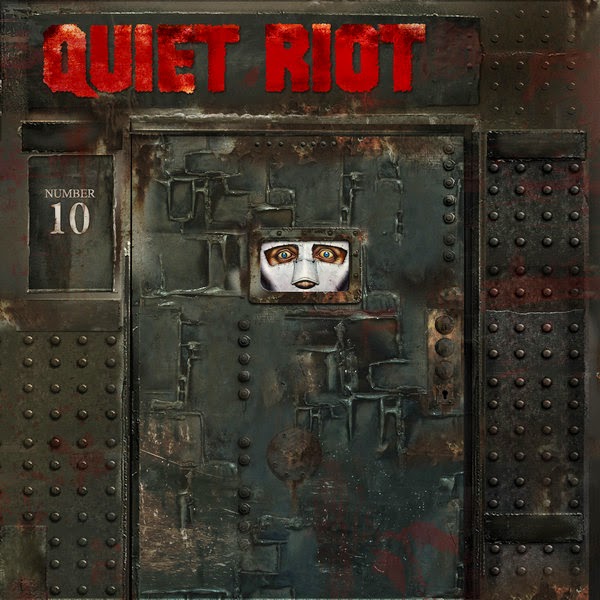 10 is the first album to be released by the legendary Quiet Riot since founding member, Kevin DuBrow, passed away in 2007 (has it seriously been 7 years already?).  Taking the microphone stand, apparently on a permanent basis, is former Love/Hate frontman (and Ratt fill-in), Jizzy Pearl.  I say "apparently", as Pearl is now the fourth singer to front the ever-revolving carousel of band members since DuBrow died.  However, Pearl is the first to actually record anything with Banali and the current line-up, so it seems this is the line-up that will be moving forward...but you never know.  After all, there have been more than 20 different versions of the band since it first appeared in 1975, and more than 15 versions since the band broke big with Metal Health way back in 1982.

Things start off in great fashion, as "Rock In Peace" (R.I.P, anyone???) is a true Quiet Riot rocker of the highest level, and Pearl even has the feel of DuBrow as far as his delivery goes, and if you pay attention, you can even catch a few Metal Health lyrics in this album opener.  Grossi rips through a nice solo, and Banali's thundering drum style is evident throughout.  The mix is a bit muddy and subdued, but the sound actually gives the song even more of a throw-back quality to it.

"Bang For Your Buck" is a pretty solid rocker, complete with a cool slide guitar and some great shouted vocals on the chorus, but the production is getting harder to listen to, especially with the guitar solo sounding like it is set a bit too far back in the mix, which is disappointing because Grossi does some very solid work here.  Pearl's vocals step back just a bit from the previous track in terms of sounding like DuBrow, but his snarling delivery fits the music very well.  Banali and Wright are in perfect sync here, and the band sounds like it is hitting on all cylinders at this point.

"Backside Of Water" is another formidable rocker and is one of my two or three favorites on the disc.  Once again, Grossi tears through an absolutely scorching solo and the band is in great form throughout, with Pearl charging out front like a mad-metal-man possessed!  Color me impressed, at this point.

"Back On You" sounds more like something from the Condition Critical era of the band, or perhaps even QRIII, than Metal Health, but it is definitely a Quiet Riot rocker and is possibly the best song here.  I really, really like this song and Pearl does great service to the band with his efforts here.  Oh...and did I mention what a great guitar player Grossi is on this disc?  No?  Well, he is...

"Band Down" finds the band struggling a bit, in my opinion.  To be honest, this track would have been cool if the previous singer had been in charge, but not with Pearl out front.  Oh...and by the way, I don't mean DuBrow, either, when I mention previous singers.  "Band Down" is a song that Paul Shortino would have NAILED on the love-it-or-hate-it Quiet Riot album from 1988.  Grossi lays down some inspired, bluesy guitars, and the harmony vocals are excellent here.  To give him credit, Pearl sings his heart out here, but this is material that Shortino would've just owned with little to no effort.  Not a skipper, but not the top of the heap as far as overall execution goes. (Musically, it might be my favorite track, however.)

"Dogbone Alley" finds Pearl once again channeling his inner DuBrow, as the band recovers from it's minor slip on the previous track, and the band easily handles this QRIII-styled effort.  Again, not the absolute best track out of the new material, but definitely a Quiet Riot track.

At this point, the album switches to live material recorded with DuBrow out front.  Honestly, I wish the band would have just released a 6 track EP or found another couple of songs to record, because the live section leaves a lot to be desired.  While it's cool to hear the lesser-known "Put Up or Shut Up" in a live setting, DuBrow's vocal performance is certainly not of the highest quality, with numerous spots where his vocals break noticeably.  "Free" and "South Of Heaven" are both songs taken from the little-known Rehab albbum (no, this isn't Slayer's "South Of Heaven" done QR style...), and few but the true Quiet Riot die-hards probably even know what these two songs are.  The performances on these heavier, more bottom-ended songs are solid, but don't add a lot to the legacy of the deceased front man.  The medley, for me, is nearly ten minutes of wasted time, as none of the band's most well-known songs are included.  In fact, my gut said that Banali simply included this medley as the album closer since DuBrow brags on the drummer a bit at the beginning of the track.  In all honesty, after completing my review, I plan to cut out all the live material from my iPod, keeping only the new material.

The production and mix leave quite a bit to be desired in places, but overall, the new material is honestly some of the best Quiet Riot material to be put out since the Shortino-fronted disc, in my opinion.  Nothing here would have made it onto Metal Health or Condition Critical, most likely, but all the new songs are better than anything found on Down To The Bone, Guilty Pleasures, or Alive And Well.

As to the live material, look...I get that DuBrow was a band founder and the leader of the band through the highest points in a storied career.  But why tack sub-par live material onto an album that features a NEW singer that you hope will lead you into the future?  Just like there shouldn't be two or three live Randy Rhodes cuts put on every album that Quiet Riot releases, there is no need to put DuBrow on new Quiet Riot albums, either, especially if he is used as a marketing tool or as an afterthought.  The record would have stood up just fine on it's own without the DuBrow tracks.  In fact, it would have stood up BETTER for this listener.

UPDATE:  This album has been pulled from all digital outlets and is no longer available.  Additionally, it was never released on CD or vinyl, according to Frankie Banali, so if you buy it ANYWHERE, it is a bootleg or a radio/media preview copy (mine came in a blank paper slipcase with no artwork at all).  Buyer beware.

Rating:  Rock this to a 6.  The new material is pretty good if the mix were better, but the inclusion of the live material really damages an otherwise solid effort.

Back To Reviews Index
Posted by arttieTHE1manparty at 3:12 PM