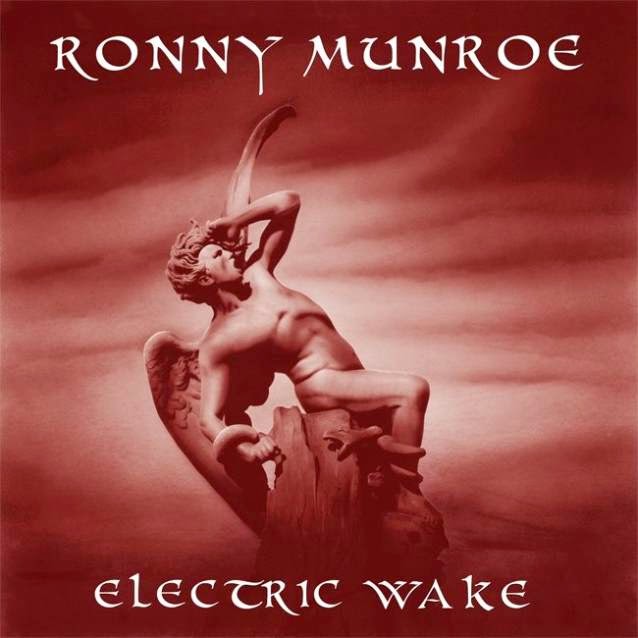 Current Metal Church frontman, Ronny Munroe, has released another solo CD upon the metal masses, this time bring along with him fellow Rat Pak Records alums George Lynch, Dave Rude, and Pamela Moore for added effect.  Using a straight forward metal approach, similar to what recent Metal Church releases have employed, Munroe really doesn't stray too far out of his comfort zone for the majority of this record, instead choosing to tread familiar waters.  The problem with treading water is that while you manage to stay afloat, you don't really go anywhere.  Electric Wake struggles with this, just like a swimmer in the deep end does.

The album starts off well enough, with "Burning Time" being a strong opener that really focuses the listener's attention on the powerful, throaty range of Munroe, who truly has one of those "metal" voices.  Never sing-songy, never whiny, yet never lacking in emotion, Munroe spits and snarls his way through this very Metal Church feeling track.  In fact, were the song to feature a stronger guitar solo and a bit chunkier rhythm section, I would have guessed this to be a Metal Church song that would have fit along with anything that has been released in the band's Munroe years.

"Ghosts" was teased in several places on the internet, largely because of the inclusion of Mr. Scary, George Lynch, putting his signature on the guitar solo for this track.  Oddly, this song's main guitar riff sounds so much like Kreator's "Golden Age" that I nearly checked to see if it was given credit somewhere in the album notes!  We are talking almost note-for-note riff lifting here!  Again, the song is solid and Lynch does what Lynch does best, making "Ghosts" one of the two or three really good songs here, even if it isn't overly original.  As far as Munroe's contribution here, he sounds a LOT like David Wayne (another previous Metal Church singer, for the uninitiated) here, and the song is better for it!

"Turn To Stone" is another solid metal number that doesn't take any real risks, but it will satisfy the metalhead that just wants to thrash around and throw his fist into the air.  Decent guitar work and a solid rhythm section here, as well, and "Pray" is another strong effort that really shows Munroe's range not only in pitch, but also his range in handling different vocal approaches.  Within this song he goes from high pitched screaming to singing in almost a whisper at times.  This track also has one of the strongest guitar solos (outside of Lynch's work), and it is a fairly well crafted song all the way through.  I could hear Metal Church grabbing hold of this track and beefing the sound up a bit and making it something that old school fans of the band would really enjoy.

"Ritual Damage" isn't bad, as it features some solid chugga-chugga rhythms and aggressive guitar work throughout, with another nice, if short, solo thrown in the mix.  Again, this feels like it might be left-over Metal Church material that didn't make the cut on a band album.  It's not bad at all, it just seems to be missing "something".

"Sleepless Mountain" feels like a lesser Iron Maiden track, with the galloping 80's sounding guitar riff that opens the song and carries on throughout.  Not great, but not horrible.  The same can be said of "The Others", which also has that Maiden feel to it with its guitar tone and musical phrasing.  Pamela Moore adds her vocal talent to the effort here, but the effort is largely wasted as the lyrics are pretty lame, to be honest, sounding like something Manowar penned...and later rejected.  As I stated, Moore is musically very talented, but this isn't the type of song her skill set works best on.  This is more a Doro Pesch type of song than a Pamela Moore song, and I doubt even Doro would throw in with this song.  Rude is given a good chance to show off his skills with the guitar, and he impresses, but, like Moore, can do little to save this song.

"United" closes out the album in pure Metal Church fashion and it is probably my favorite track from the record.  It's just too bad it is buried at the end of the record because I question how many people will actually get all the way to this song before giving up on the record as nothing more than background noise, or just turning it off altogether and moving on to something else.  That's too bad because metalheads, and especially Metal Church fans, will likely really enjoy this driving, metallic track and Ronny puts his all into the vocal performance on this song.

My version of the CD does not include the two bonus tracks, "Tainted Nation", and the Iron Maiden cover "Total Eclipse", so I can't speak to the quality of those songs.

As for the remaining tracks, they are simply filler material to my ears.  Not horrible, but really not memorable at all.  "My Shadow", "Electric Wake", and "Not You Not Me" are all given fair shots by Munroe, but the music falls short of the effort he puts into each song, and, quite frankly, the songs just fall flat.

The problem on the record isn't Munroe's vocal performance, as that is strong throughout.  I think a pretty solid EP could have been crafted out of this record, with "Ghosts", "Pray", "United", "Ritual Damage", "Burning Time", and "Turn To Stone" all being solid, if sometimes not overly amazing, songs.  But if you do the math, that's only 6 out of 11 tracks included on this record, meaning barely half of the disc lives up to what I had hoped Munroe would deliver on this, his third solo outing.  As such, the final rating is going to reflect that percentage.

Rating:  Rock this at a 5.5, or, better yet, carve out the weakest material and make a decent little mini-album on your iPod or mp3 player that would probably rock considerably harder for you.

Back To Reviews Index
Posted by arttieTHE1manparty at 12:20 PM