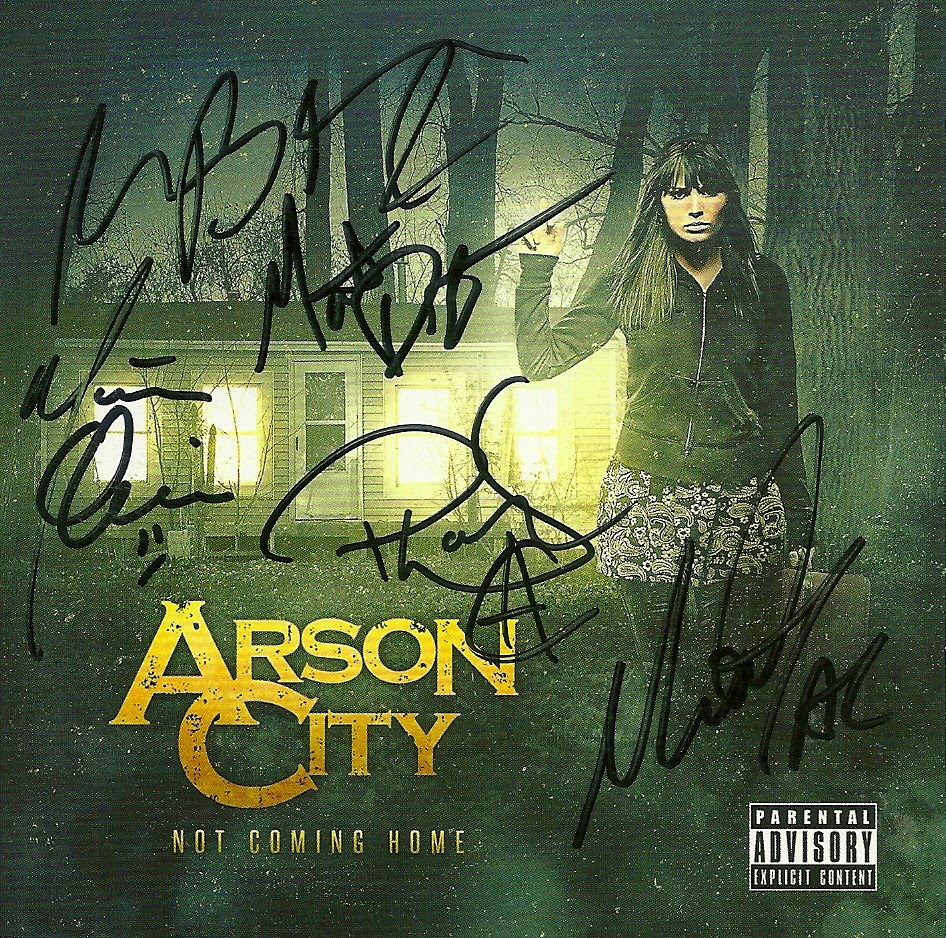 Omaha's Arson City return with their second EP in a year with their brand new release, Not Coming Home.  For the uninitiated, Arson City is Patrick Michael Wilson, the former lead singer of Emphatic, with the rest of the band (Mark, Eric, Matt, and Matt) all being members of The Wreckage.  (To make things a bit more confusing, if you really want to, The Wreckage's former lead singer, Grant Kendrick, is now the lead singer of Emphatic...).  I'm really not 100% sure of the dynamics of why who isn't in what band now, and I really don't care, because the result is a pretty good band, Emphatic...and DAMN GREAT BAND in Arson City!

Things kick off on the new EP by jumping straight into the music this time, with no odd little intros to set the stage.  "City of Fire" is a blistering, high voltage rocker with plenty of distorted guitar and thunderous drums, courtesy of Matt Denker who is a monster behind the kit, to get your head banging right from the start.  Wilson comes snarling in with his vocals firmly shifted into the lower register as the band pretty well sets up who they are and paints for listeners a portrait of what it is to be a citizen of Arson City.  "Frankenstein" keeps the monster rolling (yes, pun INTENDED), with more chunky, crunchy metallic guitar, Wilson's angst-driven vocals, and a solid bottom end on this song about a relationship that "cuts me into pieces, and every piece of me is yours", eventually changing the person into a "darker creature" and "another Frankenstein".

The band shifts directions a bit with the decidedly more radio-friendly "Not Coming Home".  Two versions of this song are featured on the EP of the same name, with this first version being the full-band version (the latter version is a fully acoustic rendering).  Written by guitarist Eric Whitney, with lyrics by Wilson, the song has a story-teller quality to it that so many truly great songs do.  Wilson allows his vocals to take on a more emotional, less angry, quality on this acoustic based ballad about leaving one's past behind, both literally and figuratively.  The song features one of the catchiest lyrical turns I have heard in some time with the chorus's "two black boots and one suitcase" line.  Emphatic fans are going to try to draw a parallel between this song and Emphatic's "Put Down The Drink" as far as style and musical approach, but "Not Coming Home" is the superior song in nearly every way, no matter how good or how popular "...Drink" was.  Good, good stuff here that should be all over modern rock radio and should dominate Octane's Big Uns Countdown show.

"Stop Us Now" returns the band to their chugga-chugga-start-stop-start again style of modern metallic rock goes, taking the listener back inside the walls of the post-apocalyptic world Arson City has created with their image and their music.  Oliver really shines here as the bass is prevalent throughout the track, rumbling through the seams where the guitars and Wilson's vocals allow other sounds to leak through.

The big shock of the album for many people will be the band's decision to cover "Too Close".  Originally performed by Alex Clare, "Too Close" is given the Arson City treatment here, with the gravel in Wilson's vocals adding the perfect edge to a much heavier version of the top 10 pop hit.  I was skeptical at first, but once I got a chance to actually listen to the song, I have to admit I was wrong in my initial apprehension.  Arson City makes the song their own and it flows perfectly here, especially leading into the album closer, which is an acoustic version of the title track.

I do wish that we had about three or four more songs here, but in this day and age, EP's seem to be the way a lot of bands go...if they bother to release physical CDs at all...so I am glad to have this one.  As you can see, my copy was signed by the band when I got the chance to see them open recently for Boba Flex.  Do yourself a favor and seek this band out in the live setting, not only so you can also get your disc signed, but because this band puts on the BEST live performance I have seen from a smaller/regional act, and they actually out-perform the majority of the nationals I have seen in a club setting.  Wilson and Bechekhauer dominate the stage with their presence, and once they bring out the Arson City Horror Squad drum corps (dressed in riot gear and gas masks), the SHOW IS ON!  It is not to be missed, folks, seriously.

The packaging is simple, as you would expect from a small indie production, but that takes very little away from the greatness of the overall product.  Get your copy NOW...you won't be disappointed.  You can follow them on Facebook at https://www.facebook.com/arsoncity or check out the music at http://www.reverbnation.com/arsoncity .

It is going to be a steep climb if anyone is going to knock Arson City and Not Coming Home off the top of the heap as far as true independent releases go for 2014!

Rating:  Flat out crankable!  Great music from some of the best guys I have met in the industry on any level, with a killer live show to top it all off.  Crank this to 9.

Posted by arttieTHE1manparty at 12:48 PM