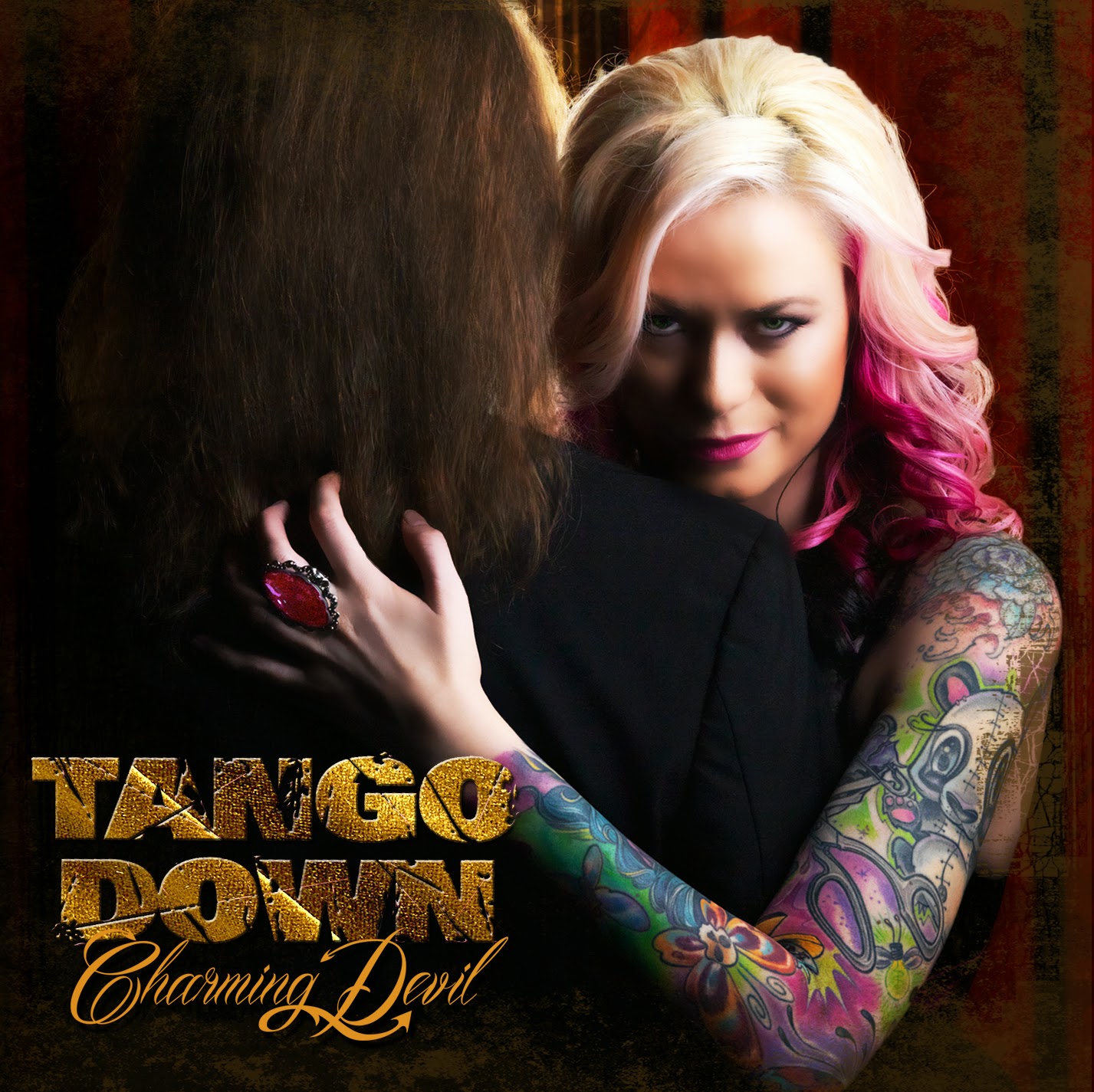 Tango Down returns with their brand new release, Charming Devil, and in one fell swoop have upset the rankings for album of the year...at least as it stands in mid-September.  I can say with all honesty that THIS is the record I have been hoping to hear from this band since the very first time I put one of their CD's on.  THIS is the record Tango Down was always supposed to make...

For starters, David Reece sings like a man possessed.  This is, hands-down, the best he has sounded to my ears since the ill-fated Accept album, Eat The Heat.  In fact, it sounds to me like a hybrid of the Bangalore Choir, On Target album and that Accept record, but with better production than either, and stronger, meatier guitars.  David's voice is edgy and powerful, but you can still hear the fun he is having with each of these tracks right from the get-go.  A great example of this is on the title track. You can almost hear the smirk that Reece likely had plastered on his face as he delivers the "I'm a charming devil..." chorus.  Juxtapose that with the power and emotion packed into the ballad, "Too Many Roads"...which isn't even the best ballad on the record...and you are left with the feeling that Reece was really after something specific here, and that specific thing was the album of his career.

Secondly, as I briefly mentioned above, the guitar work here is just spot-on perfect.  The solos are never stretched out to the point of becoming masturbatory wankery, with solid leads and even more solid rhythms driving each of the ten tracks here.  Case in point would be the guitar work done on "Change My World".  I was discussing this album...and this track in particular...with label owner, John Kivel, and I told him I thought this song was the perfect mix of heft and melodic sensibility, with an absolutely insane guitar solo that I only wish was a bit longer.  But in retrospect, it's that wishing the solo was longer that makes you try to hold onto it when you hear it, because you know it is going to be over all too quickly, and won't be there to drone on and on forever, eventually becoming a lesson in expert-technical-guitar-skill-meets-please-get-on-with-the-song.  We've all heard songs like that at times, and I am exceedingly glad that Miller never lets his desire to be the new guitar hero of the ages interfere with the song structures or the band concept.

Even the rhythm section nails things here, as Parkes and Michaels are in lock-step throughout the album, never dominating things, but always being equal contributors to the tracks here.  Again, this goes back to what I said about Miller understanding the "band concept" here.  This isn't a singer and his guitar slinging sidekick with a couple of average Joes thrown into the mix.  This is a band and a band's project, which I think serves to contribute greatly to the overall sound.

People have asked me to put my finger on my favorite tracks here, and that's a tall task.  I find the title track, complete with its voice box guitar intro (eat your heart out, Sambora...), stuck in my head for hours on end after I hear it.  "Tunnel Vision" is a pure melodic rocker, through and through with some of the best backing vocals on the record.  "New Addiction", a song in which the internet takes the narrative role and talks to the listener, has some killer guitar work, especially coming out of the chorus, that has Miller running the frets in a way that I haven't heard done in some time.  "Nothing But Rain" is such a strong ballad I had to put my lighter away before I could even get around to typing this, and Reece's vocals are a perfect match for this truly power-ballad-structured track.  "Tomorrow Never Comes" is an excellent melodic rocker, and "Change My World" has so much raw power packed into its bottom end and the dirty, chugga-chugga rhythm of the guitars that I find myself going back to this track over and over again.  "Heaven's Falling" has a great 80's throwback vibe in the songwriting approach with a pulsating bass line driving throughout and arena-styled chorus.

Ty Sims (Bombay Black) does an absolutely incredible job in producing this album, never over polishing the songs, always allowing the instruments their own voice (and David his own voice, as well), and keeping things dirty and gritty when necessary.  Not sure if he had a hand in the tracking of the album, but the flow of the songs from one to another is also done exceptionally well, giving the disc a special kind of life when being listened to.

At this point, I only have a digital review release, so I cannot speak to the packaging yet, but I have no doubts it will live up to the reputation of all of the Kivel Records releases I have reviewed in the past.  (I will update this to reflect what I discover when my copy arrives.)

I know it sounds like I have some sort of bizarre obsession with this album, and perhaps I do.  It's such a rare thing when you get an album and everything about it clicks in such a solid way from that first "push play" moment.  Charming Devil just happens to be one of those rare albums that hits on all points for me.  Here's hoping it doesn't wear down at all over time, because I can't help but smile the entire time this album spins.

The band is taking their new album and their live show on the road this fall, so be sure to check them out if they are even REMOTELY near you!  Melodic Rock Fest 4, Wolf Fest, and Skull Fest are just three of the festivals they will be playing, so if you still haven't headed over to Kivel Records to snag a copy by the time the band is in your neck of the woods, be sure to stop and get your copy directly from the band.  I've been told they have a couple of special surprises in store for their live show, and I can only hope "Angel In Black" from Bangalore Choir, and "Generation Clash" from Accept are among those surprises!

Rating:  So dang close to perfect in places, it is painful!  Crank this sucker to 8!  Just a truly great album!

Posted by arttieTHE1manparty at 11:56 AM