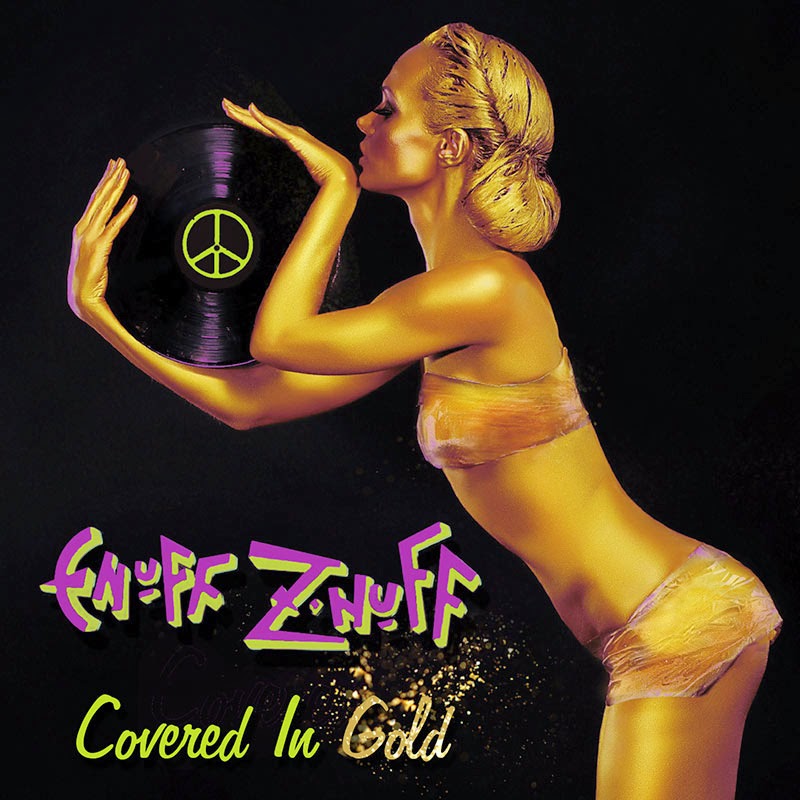 The ever-morphing saga of Enuff Z'Nuff seems to be continuing with their latest release, the covers offering, Covered In Gold.  I say ever-morphing because it seems that, depending on the date, the band line-up is in a constant state of flux.  Donnie is in, Donnie is out.  Johnny is the lead vocalist, Johnny is the lead guitarist.  The band is a three-piece, the band is a four-piece.  Yeesh!  It could become a full-time job keeping up with this band...and I already have a full-time job, a part-time job, and this hobby!

Anyway, Covered In Gold is exactly what you might expect, and NOTHING like what you might expect at the same time.  Why?  Because, love them or hate them, Enuff Z'Nuff has always lived on the fringes of the hair genre they are always lumped in with, right or wrong.  Forever wearing their 60's influences on their sleeves and in their songs, the band also incorporated elements of the 70's, and later bits and pieces of the alternative sounds of the 90's, into their sound that can only be described as the Enuff Z'Nuff sound.  Face it, this band has NEVER sounded like anyone else, and likely never will.  As such, it should probably not come as a surprise that when the band decided to do a covers album, the covers they chose are not your typical hair metal/hard rock cover fare.  So, I am going to break this review down into two sections: No-Brainers and Surprises, as there are a handful of both on this covers effort.

I'm not going to spend a lot of time on the obvious material here, as no one is likely shocked the band chose to cover both the Beatles and John Lennon, or that both tracks came off pretty well.  I like the beefier sound Lennon's "Jealous Guy" gets on this record, which is saying something since I am NOT a Lennon fan.  Matter of fact, I'm not really a Beatles fan, either, with the exception of their early 60's output and a very small smattering of later material.  That being said...

"Run For Your Life", while not the most likely cover choice if I go through a list of Beatles songs, is not shocking.  The band does a solid job of working this song up in a more rock fashion while staying true to the original sound.

The band tackling Nirvana's "All Apologies" isn't as big of a shock as it probably should have been, as Cobain had that tragic-Lennon kind of sound to a lot of his writing, but I would be lying if I told you I thought Nirvana was an obvious selection for this band.  However, anyone familiar with this song would likely agree that if there was one Nirvana tune that Enuff Z'Nuff could pull off, it would be "All Apologies", and they would be correct.  Very well done here.

"Believe It Or Not" is actually the theme song from the 1980's sorta-super hero television show, The Greatest American Hero.  Aside from some HORRIBLE production on this track, I really like what the band does here, and Monaco has some very nice lead guitar work here.  Why is this not a surprise?  For anyone who knows the song (and most of you will the second you hear it), come on...who else could have/would have covered this song so effectively?  No, I'm not surprised that a band as eclectic and out there as Enuff Z'Nuff chose this quirky classic to cover.

"Tears Of A Clown", which is a cover of Smokey Robinson, is also not a real stretch of the imagination, as the performance here is one that I think the listener could easily imagine the band pulling off in concert.

"Everything Works If You Let It" is on this list because I am surprised at how poorly the band does covering Cheap Trick.  I honestly thought Cheap Trick would be a slam dunk for Enuff Z'Nuff to cover, but I really don't like the effort here, and the production is not particularly good, which only adds to some of the problems.

Queen's "Stone Cold Crazy" is a shocker that I did not see coming by a country mile!  I had no way to prepare myself for the level of musical angst incorporated by the trippy-dippy, happy-go-lucky band.  Metallica it is not, but it is definitely given an edge that is not traditionally applied to Enuff Z'Nuff.  The tight vocal harmonies on the chorus are a given, but the strong guitar work here was a pleasant surprise.

"She Sells Sanctuary" falls onto the surprises list because nothing about Enuff Z'Nuff and The Cult come together in my mind...ever.  I realize both have always had a retro sound, but EZN is more 60's based than the 70's classic rock roots of The Cult, so I didn't anticipate this cover at all.  Not great, but not horrible, either.

"The Jean Genie" is a song by David Bowie that I will admit I was not overly familiar with.  Not being a Bowie fan in the slightest, this isn't really shocking for me, however.  What is shocking, or more appropriately, surprising, is that the band doesn't do a particularly good job with this song.  Much like I said with the Cheap Trick cover, I would've thought Enuff Z'Nuff would have done more with a song by such an out-there character as Bowie.

"When Doves Cry"   Anyone who knows me will tell you that Prince is one of my big guilty pleasures.  Not going to deny thinking Prince is a musical genius or that his live performances are among the best live shows I have ever seen.  That being said, the band does a fair amount of rearranging on this track, totally changing the intro, and really the vibe of the song in general, making it a different animal all together.  I'm still not sold on this version, as I do love the original, but at least they took a risk on a song that few others would have even considered.

"The Stroke" by Billy Squier is one of those hard-rock songs that EVERYONE knows, but oddly no one seems to cover for some reason.  Perhaps everyone is still trying to distance themselves from the disaster that was the later output from Mr. Squier.  Regardless, Enuff Z'Nuff does a solid job musically on this one, although Monaco's vocals are a bit tough to take at first.  Repeated listens have taken the edge off this track for me, but I won't be surprised if some people don't give this song enough time to allow the vocal approach to work for them.

"Yankee Rose".  This song is a mixed bag for me.  On the down side, Monaco is NOT Steve Vai, so he really should have tried something other than the talking guitar effects utilized on this post-Van Halen Roth track.  Vocally, however, and really for the rest of the music on the track, the band does a solid job here.  It does come off like a bar-band cover rather than a professional, big-time cover by a band of the level of Enuff Z'Nuff, but it's not horrible by any means.

The last two tracks are live songs.  The first is a live in-studio rendition of "You've Got To Hide Your Love Away" from the Howard Stern Show, and it is a pretty faithful rendition, tastefully done, but unfortunately interrupted by Howard's annoying banter.  The other live cut is an unplugged version of "New Thing".  Eh, not great, not horrible.  The recording limitations here don't help, either.

I have to assume (and we all know how dangerous assumptions are) that this album was recorded in different stages over a stretch of some time.  I say this for a couple of reasons.  First, the production is very uneven, with some songs sounding like demos and others sounding as if they were given at least a decent studio effort, production-wise.  The other reason is that the last I had heard/read, Chip and Donnie weren't even on speaking terms.  We shall see, I guess, as a new album of originals is slated for 2015, but how many "originals" from the band remains to be seen.

Would I rush right out and get this?  Nope.  Am I going to throw it away?  Also, nope.  I like the quirk-factor to the song selection, and a couple of these covers are very, very well done.  The previously mentioned production issues in spots keep it from possibly getting a better final rating.

Rating:  I'm not a fan of covers albums in general, but this one surprised me a bit.  Rock it at 6.

Back To Reviews Index
Posted by arttieTHE1manparty at 1:10 PM