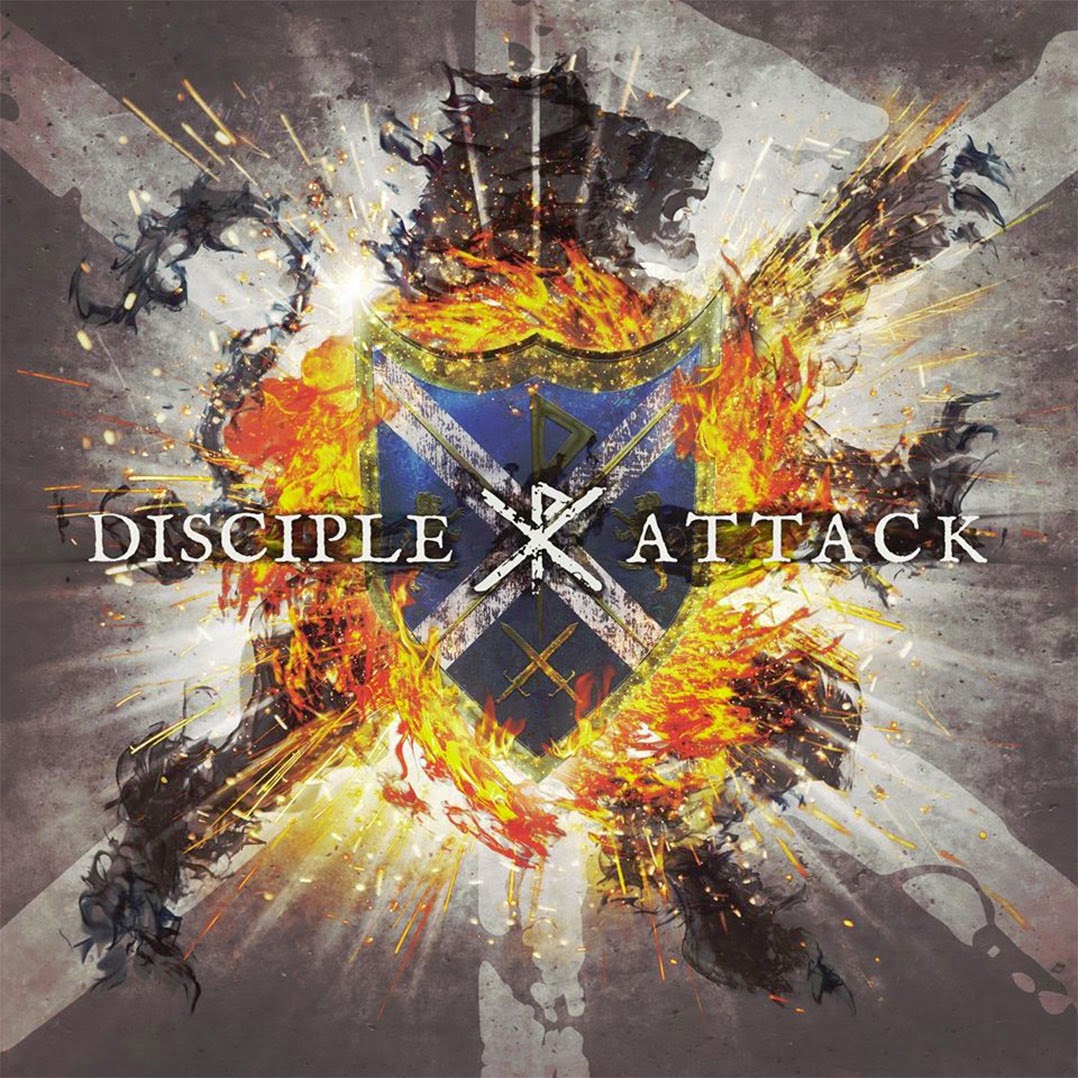 It seems like lately I have been reviewing a lot of new, modern material from bands that are now pushing 20 years in the industry.  Disciple's latest effort, Attack, continues that trend.  I had to actually stop and ask myself how Disciple could possible be 20 years old already...and how I am still listening to them today, as I will be honest in saying I was NOT a fan when the band started out.  Their combination of rap and metal was simply not something that slotted into my musical vocabulary as a 20-something music fan.

Granted, the only member of the band who has been here for the full history of Disciple is founder and frontman, Kevin Young.  Looking as young and fresh and energetic as always (was he 12 on the first album or something?!), Young formed a new version of the band (he refers to this version as Disciple 3.0), ditched the whole record label concept and went with a Kickstarter-funded project, and put together the best Disciple album ever, by my estimation.  Geared for modern rock radio musically, but as lyrically bold as ever, Young and company have crafted a guitar-driven modern rock record with enough edge to keep the more metal-inclined fans happy (check out "Radical", "Attack" and "The Name",  for starters), while making sure that the younger generation of fans who flooded Christian radio with requests for "Dear X..." a few years back are not left out in the cold.

The album kicks off with its lead single, "Radical", which is one of the hardest hitters on a record chock full of uptempo rockers.  "Radical" reminds me a lot of the era when I really started finding myself liking Disciple, which is in that By God through Back Again span of records.  In fact, "Radical" sounds like it could have possibly even come from Back Again, as the hard charging guitars and thundering drums recall a harder rocking band than what Young had seemingly morphed the band into with Horseshoes & Hand Grenades, and especially Southern Hospitality. Don't get me wrong, I like both of those records, but I always felt there was an edge missing from most of the songs on those two records.  That edge has been rediscovered and reapplied here, to be sure!

From here, the title track, "Attack" continues in the hard rock vein, albeit just a slightly more radio rock direction.  A bouncy guitar riff brings the song in, crashing it into pounding drums and some  atmospheric elements, before big, shouted vocals ask, "Are you ready for a fight?!", plunging the listener into a spiritual call-to-arms battle anthem!  There's a small vocal breakdown in the middle, but the intensity doesn't let up for long before the bass drum starts to thump again and Young redirects the listener back to the matters at hand!

"Dead Militia" finds Young really reaching into his screaming vocals for the first time on this new album on yet another blistering number that will likely find itself being released as a single before this record is laid to rest.  The drums and bass are given opportunity to shine in spots on this track which is one of the two catchiest tracks, musically, on the entire record.  I was extremely happy that this song was included in the setlist of Disciple's recent City Rockfest Tour, as I was bouncing along with the song from note one (as was my 7 year old son who was attending his first ever rock show).

From here the band shifts gears a bit with what I am guessing will be a major Christian radio rock hit this summer in "Scarlet".  Leaving the hard rocking on the roadside for just a moment, Disciple jumps seamlessly into the modern rock territory it has so effectively been navigating for the past few years.  Young stays as bold as ever with his lyrics ("Though my sins they be as scarlet, Though my hands have been an enemy of God, Though my heart has played the harlot, You give me more than I deserve..."), but he never comes across as preachy or Bible-thumping in his approach, which makes a song like "Scarlet" even more accessible to fans who may be curious as to what Disciple is all about.

"Unbroken" finds the band slowing things just a bit more, steering their musical vehicle into the realm of  modern rock balladry, although they refuse to leave the thunder of the drums or the punch of the guitars completely behind on the choruses.  Speaking of the chorus, we also get to really hear Jason Wilkes add his backing vocals to this track in a simplistic, yet effective manner.  Again, a great song that will find a lot of love on rock radio, even if it is a bit too tame for some band fans.

The rockers need not fear, however, as "The Name" seems to come out of nowhere and threatens to shred your speakers with its sheer speed and power!  This is the Disciple of old by just about any account, and the band tears things up at break-neck speed on this juiced up praise and worship hymn (it's basically "Tis So Sweet To Trust In Jesus" on high octane fuel).  Experienced headbangers only need to apply for entrance here, folks!  Huge, shouted gang vocals, crushing drum rhythms, screaming guitars, a thundering breakdown, and impassioned lyrics...what more could you ask for from a band that is obviously hitting on all cylinders on this track.  Easily the highlight of the live set I saw in March (which was also boosted by a killer light show and some amazing video images...).

The one song on the record that I don't think lives up to the greatness of the rest of the record is up next with "Angels & Demons", and even this isn't a bad song.  The song structure just doesn't seem to fit the flow of most of the record (there are a couple more oddities yet to come), but I never find myself skipping this track or wishing that it hadn't been included.  Perhaps its the almost jarring change in tempo between this song and "The Name" that makes it stand out so starkly, I'm not sure.

"Lion" is a song that had to grow on me, and I'm still not 100% certain how I feel about it sometimes.  This one is definitely a mood song for me, although much like "Angels & Demons", I would never say I dislike it and I never skip it.  The song almost feels disjointed...almost...as it has a rather quirky rhythm, especially during the chorus, that I find difficult to really lock into.  It was immensely popular in concert, so maybe its just me...

"Yesterday Is Over" returns the band to modern rock ballad territory.  This is the "lighter in the air" song of the record, to be sure.  This one is the "swayer" on the album...and in the setlist...and there were many hands in the air almost the second the infectious guitar intro to this song hit the speakers.  Young really showcases is singing talents here, rather than relying solely on his powerful, more metallic screaming style.

"Kamikaze" picks the pace right back up and is one of my three or four favorite songs on the record, although I have heard (and read) several people saying they really don't care for this track.  I love it, personally!  A definite head-bobber, and showcases a vocal trade-off between Young and Wilkes that I think really works well.  Sure, this song doesn't really fit with the majority of the record, but that only serves to set it off a bit.  It also features one of the truest guitar solos on the record, and is just an overall fun song that seems to manage to creep up a volume notch or two every time I play it.

"Crazy" feels like an industrial rocker to me with some of the effects used at the intro and throughout the rest of the track, and the bass and drums really drive this song for most of the verse sections before a sing-along styled chorus kicks in.  Not overly memorable, but a fun number near the end of the record, which closes out with "The Right Time".  As is often the case with Disciple, the band chooses to end things with a ballad (or at least a more down-tempo number), and this is a pretty good one.  An acoustic guitar carries much of the melody on a track that reminds me of a lot 80's hair band power ballads in the way it is structured.  Again, quite a bit different than the majority of the record, but a solid way to exit and one last chance for Young to get his lyrical point about God's love and salvation across to the listener.

As has been the case for several years now, Travis Wyrick is the producer of the album, and his touch is felt throughout the record.  The man has a definite knack for feeling where Disciple wants to go with their art, and Attack is no exception.  The production is clean and modern, with the guitars sounding especially crisp and sharp here, and Young's vocals punchy and out front the way they should be, without burying the rhythm section in the basement of each track.  Solid, solid work here.

While a lot of bands are satisfied to rest on their laurels...and tour on their catalog...it is evident Disciple is nowhere near done musically, as Attack is easily their most complete record in at least a decade, and my favorite from their now impressive catalog.  I was a little bit late getting to this record, but it is one that I am definitely glad I picked up as it reinvigorated my interest in this band and drove me to go back and pull out their last four or five records and rediscover some of the gems I had unintentionally buried in my CD rack.

Rating:  Crankable, all the way.  Crank this to a powerful 9...and make sure to catch the band live if you get the chance!