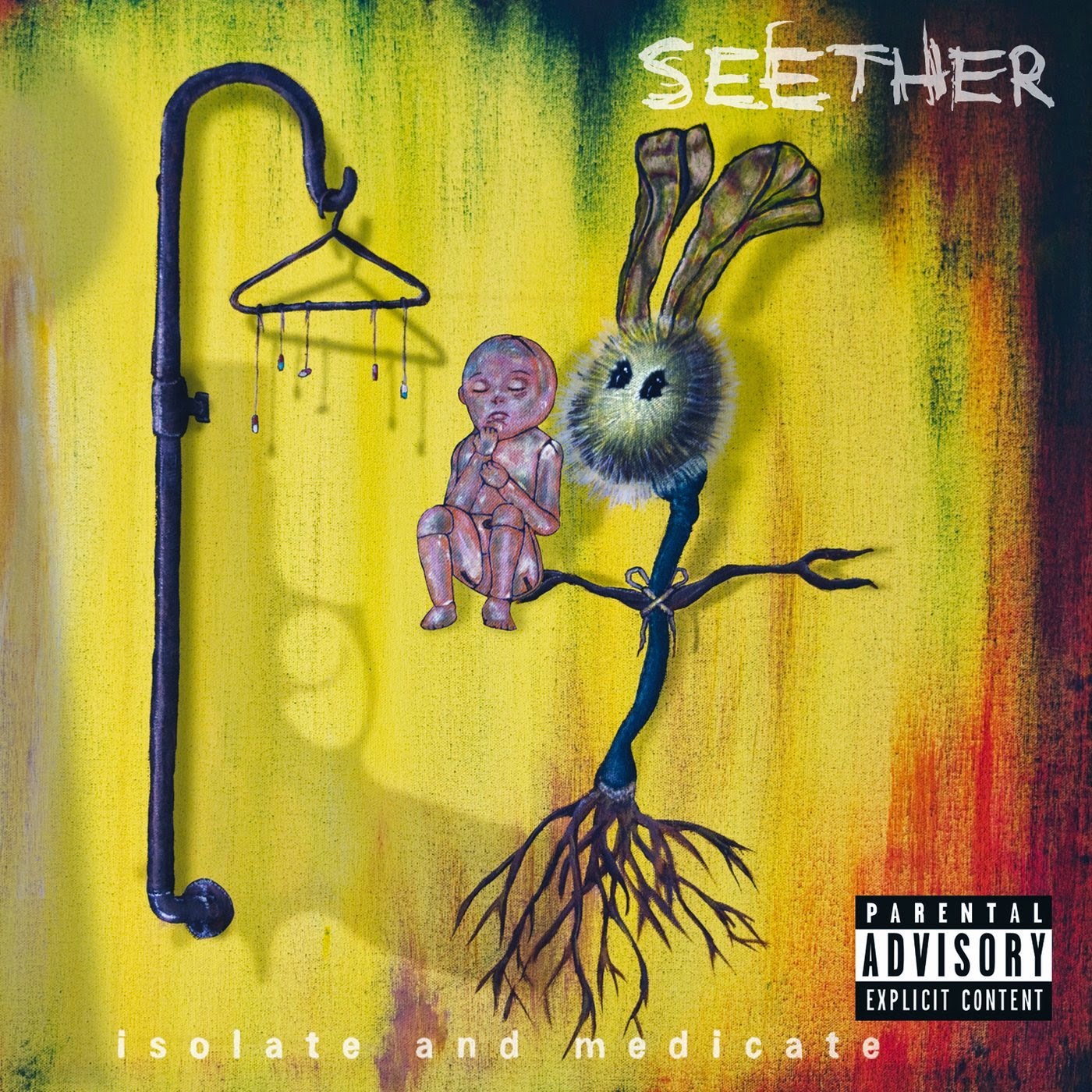 Three years had passed since South Africa's Seether had released new music, and I had heard several times that the band had been "put on indefinite hiatus", or even "shelved", in favor of side projects from the individual band members.  I really don't know a lot about the band outside of the album Karma And Effect, other than the songs I had heard on the radio, so whether there was anything to these rumors or not, I am not the person to ask.  I had kind of lost interest as everything started sounding the same, at least as far as radio single go, so if the band had decided to hang things up, I guess I wasn't going to get too wrapped up in that drama, as I had nothing emotionally invested in the band in the first place.  However, it is obvious with the release of Isolate And Medicate, the band's 6th studio album, Seether let the world know that not only are they not done as a band, they are also not done as a musical force in the modern rock scene.

The album kicks off with "See You At The Bottom", a hard rocking tune driven by the grunge-inspired guitar tones and style that Seether has become known for, with Morgan's vocals mixing with the backing vocals in a lesser-degree Alice In Chains fashion throughout much of the track.  There are moments, however, where Morgan really cuts loose with some impassioned screaming, especially during the chorus, that have not always been been present in past Seether efforts.

"Same Damn Life" sports a lifted guitar riff from Little Peggy March's "I Will Follow Him", circa 1963, combining a punkish attitude with the band's grunge stylings, with Morgan even breaking into falsetto for parts of the verses!  Talk about your oddity of a song, but you know what...it works.  Easily one of the catchiest songs on the record, I can't help but smile a bit when I this track, which is now a single, comes on the radio.

Lead single, "Words As Weapons" is almost...haunting...in the way it is put together.  There is just something about Morgan's vocals here, along with the sparse nature of the music during the verses, that is spine-tingling to listen to.  There are alss some chant-style vocals going on in chorale fashion beneath the surface of this largely drum-driven track that adds even more to the eerie nature of this track that I find myself hitting repeat on fairly frequently.

"My Disaster" takes a bit of a step backward for me, as it sounds a lot like a rehash of several of their songs from the past.  In other words, its just not very memorable for me.  The guitars buzz along in their grungy, sludgy style, but the lead guitar really isn't there to speak of (it gets kind of buried under the ryhthm guitars), and the song is rather repetitive to listen to.

"Crash" has an odd vibe to it and I honestly don't think I would have even been able to tell you it was a Seether song if I hadn't heard it on this record.  I know everyone calls this music "post-grunge", but there is nothing "post" about this track--it is straight-up Seattle worship, with elements of Nirvana in the vocals and Soundgarden-meets-Smashing Pumpkins in the music.  The song just sounds so much...older...than it actually is.  I have no doubts you could put this track on a station like Lithium on Sirius/XM, and the majority of casual listeners would never be able to tell you that was a song from 2014 and not 1994.  If you are into real grunge-sounding music, this is a GREAT track for you to grab hold of.

"Suffer It All" does absolutely nothing for me.  In fact, I think I can safely say I don't really like "angry Seether" all that well, as it makes them sound generic, even when they try to mix in a poppy element to the chorus.  Just not my cup of tea at all here.  Skip...

"Watch Me Drown" feels a lot like "Same Damn Life, Part II" to me.  It has that same kind of pop-punk vibe to it, bouncy-yet-grumpy at the same time.  These two songs, in fact, remind me a LOT of what Theory Of A Deadman did to such effectiveness on Scars & Souvenirs, mixing a pop melody in with a punk mentality, and then layering catchy, snarky, attitude-laden vocals over the top.

"Nobody Praying For Me" is a moody, darker track, with Morgan plumbing the lower end of his vocal range during the verses, then returning to his typical snarling delivery style on the chorus of this mid-tempo number.  Simplistic-yet-catchy, this is where the best of the original material ends for me, as "Keep The Dogs At Bay" is just too repetitive to keep my attention, and "Save The Day" really doesn't sound like Seether all that much to me and it has a weird guitar tone (or is it a Theramin?!) that drives me loopy when I hear it in the background.  I think it could have been a pretty cool ballad, but that dang tone is just irritating to hear over and over...

Sometimes I wonder how we get "bonus material" that's as good as, if not better, than some of the material on a regular version of an album.  Why the heck didn't you put ALL the good stuff on an album and leave off a couple of stinkers? And while we're at it, why is the "deluxe edition" in a digipack/slipcase?!  Argh!  Anyway, Seether decided to put out a deluxe edition of Isolate And Medicate with four bonus tracks, three of which are better than half of the rest of the original album.

"Turn Around" is a lot like "Words As Weapons" in the fact that it is borderline creepy to listen to.  The bass line intro sets such a spooky vibe for Morgan to snake his vocals over that this song is just plain fun to listen to.  "Burn The World" is just flat-out cool and the intro makes me think of the old James Bond movies I watched with my dad back in the 70's and 80's.  (I keep expecting Roger Moore to turn around and shoot the screen and then have blood dripping down the screen...but I digress.)    Not really in line with a lot of the Seether material I have heard before, but something I think I would like to hear more of.  And "Weak" is a pretty cool tune as well, but I've been told it actually isn't a new song, just one I missed because it was on some sort of compilation or best-of in the past.

I don't overly care for "Goodbye Tonight".  I have no clue who the Van Coke Kartel is or why Seether has them on their record, but it really didn't add any "wow" to an otherwise all-too-familiar sounding song that really sounds like it could blend into just about any other Seether album cut and not be missed.

While nothing here is going to really stretch the boundaries of what Seether has become known for, perhaps that is a good thing.  There is a lot of soft/loud/soft/loud going on with the song structure (with a couple of exceptions as mentioned), and it is an effect which has worked well for the band in the past.

While not necessarily the most diverse album the band has put out, and likely not the one most band fans will indicate as their favorite, Isolate and Medicate is a strong effort, showcasing Morgan's distictive voice, some decent song-writing skills, and a willingness to hold onto much of what has worked for the band in the past, while not attempting to rewrite previous records.  A decent listen if you are into this style, but nothing earth-shattering.  When it works, which is more often than not, it works well.  However, when things are off, the songs become nothing more than background noise that is basically indistinguishable from the lesser material I have heard from the band in the past.

Rating:  Rock this at 6.5.  While not amazing, it is definitely a decent record. Go for the Deluxe Edition, by the way, as 3/4 of the added tracks boost the value of the record.

Back To Reviews Index
﻿
Posted by arttieTHE1manparty at 8:41 PM