LACEY STURM "The Reason: How I Discovered A Life Worth Living" (Book Review) 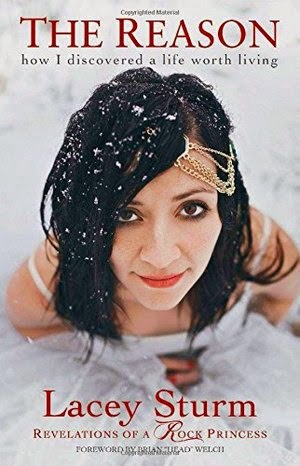 Lacey Sturm is known to hundreds of thousands of people, perhaps even millions of people, as the former lead singer of the band Flyleaf.  What most of those people may not know, however, is that prior to her joining the band, prior to her decision to commit her life to Christ, Sturm was a self-described "atheist" who was on the verge of committing suicide.  How did she get there?  How did she turn her life around?  Why did she leave Flyleaf seemingly at the height of the band's popularity?  Sturm addresses these and several other topics in this autobiography.

Unlike a lot of autobiographies, this book is not overly heavy on personal detail that really doesn't serve to drive the book at all.  The entire project checks in at just 208 pages, with no photo section, although there are several hand-drawn sketches that I believe Sturm did herself, which serve to add a bit to the content of the chapter the sketch is found in.  Yes, she discusses her childhood (she was born to a teen-aged mother who had been advised to have an abortion rather than deliver Lacey), and she talks about her struggles with drugs, depression, and thoughts of suicide, but this book isn't meant to be a dark story that leaves readers feeling sad or depressed for the author.  Instead, Sturm pushes through the details of her young life, explaining how even seemingly negative elements (a life lived in poverty at times, her love of Pantera and Nirvana, a volatile relationship with her mother, a molar pregnancy that could have killed her, etc.) shaped her life and rounded out the individual she would become.

Each chapter in Sturm's book is a "reason".  "The Reason I Love Jazz", "The Reason I Became An Atheist", The Reason I Loved Nirvana", etc., and each "reason" explains a part of who Lacey is today.  It's a unique way to set up a book, in my opinion, and I found myself turning through the pages quickly and effortlessly, seeking out the story behind the "reason" listed in the chapter title.

One problem I had with the book is also likely one of the main things that will appeal to her target audience, which is teens and young adults.  The background info on some chapters is rather sketchy and I feel like I have been left out of the loop in some places.  The historian in me wants to be let in, wants to be given the smaller details that may not seem important to many readers, while the target audience is going to be appreciative of the fact that only the bigger, broader picture is presented here, without the mundane details.  I get that I am double, maybe even TRIPLE the age of the intended audience here.  I get that I don't always understand the day-to-day struggles of teens and young adults today (despite being a high school teacher surrounded by the target audience on a daily basis), so I am not going to hold this minor issue against the book or the author.

I do wish a tad bit more time had been spent on the Flyleaf years, perhaps addressing the recording process, their videos, some more touring information, etc.  I also wish a bit more had been talked about showing how the band worked both inside of and on the outside of the Christian music industry, and how they dealt with Christians who felt they were not "Christian enough", and secular fans who thought Flyleaf was "too Christian".  However, again, I understand that is not the point of the book.  The book is here to served as a way for Lacey to communicate with her readers and listeners about the hope she has for their life and how she was able to overcome some of the same issues that they are likely dealing with themselves.  It isn't necessarily about music as much as it is about Lacey's salvation and how that opportunity is out there for every single person that picks up her book.

The 3-page forward to the book is written by Brian "Head" Welch of KoRn/Love & Death, himself a born again Christian, with an afterward written by Franklin Graham of the Billy Graham Ministries organization.  Also, throughout the book, Sturm scatters quotes from, and references to, author C.S. Lewis, whom Sturm obviously holds in high regard.

Was it a good read?  For the most part, yes.  Again, there are things I feel are missing, but perhaps they will be discussed in a future book (which Sturm suggests she will write at some point).  Again, it is relatively short, and I found myself making my way through the book in a total of about 4 hours spread out over a couple of days of reading.

People looking purely for the story of Flyleaf's formation, rise, peak, and then Sturm's departure, will likely put the book down a bit disappointed once they have finished it.  Teens and young adults who are looking for someone they can possibly relate to and learn from are likely to find themselves feeling the book was over all-too-quickly and possibly seeking Sturm out on the internet or trying to converse with her through email or social media.

Overall, a solid read filled with inspiration and hope delivered by a multi-talented artist of the current generation who "gets" that she is meant to be so much more than a modern rock star.


Back to Sleazy Readers
Home
Posted by arttieTHE1manparty at 2:51 PM