7EVENTH TIME DOWN "#God Is On The Move" 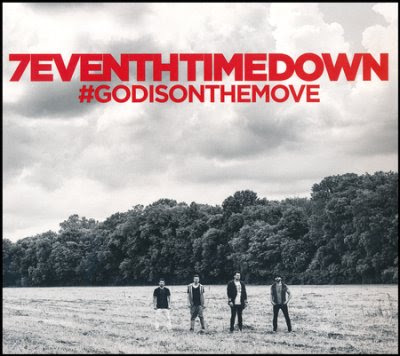 Change is an inevitable thing in music, or so it seems.  This seems to be especially true in the hard rock world, where we regularly see bands experimenting with new sounds and styles, whether it is incorporating rap/hip-hop vocals (Anthrax was a pioneer here) or dub-step programming (KORN, Papa Roach), or steering their sound in a completely Nashville-styled modern country approach (Bon Jovi, Steven Tyler, Bret Michaels, etc.).  The same holds true for the Christian hard rock market, although the trend for this niche tends to find bands sanding off their rough edges, polishing up their sound, and heading in a decidedly more pop...or at least AOR...direction in what can only be perceived as a grab for airplay and a wider fan base.  But I don't get that sense with 7TD.  Rather, I get the feeling that this is the direction that 7eventh Time Down has seemingly been steering their ship in with each successive release, and now, on their 4th effort (counting their Christmas release), the band seems to have found the sound they have been seeking.

Its hard to argue with success, especially when it is as substantial as the success that 7TD has found with #God Is On The Move, because the song has managed to reach the number one slot on Christian radio, and the album has charted Top 25 on the Christian Rock charts (#21) and the Top 20 on Billboard's Heatseekers Chart (#16).  And, they have done it without changing their line-up...at all.  The four members here were all on the band's debut album, Alive In You, in 2011, and Just Say Jesus, from 2013.  Scotty Wilbanks has moved from a full-time touring member to an "additional musician" on this record, but no one has left and no one has been added.  So, one can only draw the conclusion that this is where the band wanted to go with their sound, they executed their plan solidly, and now they are reaping the benefits of staying the course.

The production is top-notch, polished AOR-meets-CCM, with crisp guitars, strong lead vocals from Howard and excellent backing vocals, and a nice, tight rhythm section that is solid, if not flashy.  The previous Daughtry comparisons are still going to be made, especially if the more recent efforts from that band are used as the measuring stick, but comparisons to bands like Train and Jars Of Clay will also likely come into the discussion for #God Is On The Move, as well.

If there is one weakness on this record it is that it does tend to bog down a bit in the middle, as several of the songs start to really sound alike tempo-wise.  The songs are still executed well and passionately performed, especially in the way that Howard delivers his vocals and with VanZant's hooky riffing on the guitar, but another uptempo number being wedged in somewhere between "Lean On" and "Unbelievable" would probably help to break up the logjam a bit.  That being said, the reworking of "Lean On" from the classic Christian hymn, "Leaning On The Everlasting Arms" is pretty cool, although there is no way the little blue-haired lady in the pew in front of you is likely to recognize where this track gets much of its verbage.

Stand-outs here are varied, depending upon what you are looking for from the band.  They still maintain their ability to rock, especially on the title track and the amped-up rocker "Pray It Down", which is a really nice kick-starter for the second half of the record.  In fact, "Pray It Down" is the track that fans of the first two albums are likely to point at and say..."there!  That's the band I knew so well!", as the guitars are punchy and the drums kick pretty hard throughout.

"Always"starts off presenting itself as almost a ballad, but it eventually kicks things up a notch to become a nice mid-tempo rocker that I envision being one of the high points of 7TD's live set.  I really like this song as it is one of the most passionate, powerful songs on the record and one that I find myself returning to with its story and message of redemption that it presents.

"Hopes And Dreams" is a highly polished mid-tempo rocker with a solid hook and an easily sung chorus that will also have many fans on their feet.  Despite coming off as much more of a country-rocker in its overall sound, "Revival" is a track that reminds me a LOT of "Road Of A Thousand Dreams" by Trixter from that band's Hear record, and I could actually imagine it garnering some country airplay, especially on Sunday gospel shows.
All in all, I think #God Is On The Move is a solid album and a very well put together record, even if it abandons some of what I liked about the band's earlier output...especially their second studio effort.  If you are looking to bang your head and pump your fists endlessly, then this is not the record for you by any means.  If you are looking for a more polished musical affair with impassioned, up-front Christian lyrics, and catchy, toe-tapping mid-to-uptempo rock, then I would imagine #God Is On The Move is exactly what you are looking for.

Rating:  Definitely rock-worthy, I step this one back just a notch from their 2013 effort, slotting this one in at 6.5, with only the sameness of several tracks really hurting the overall rating of the record, as it is a truly solid effort and one I enjoy.

Back To Reviews Index
Posted by arttieTHE1manparty at 7:10 PM