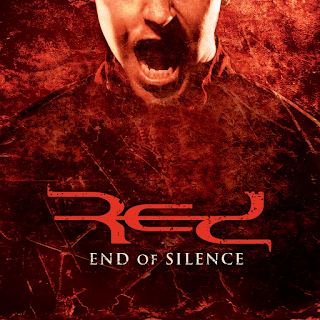 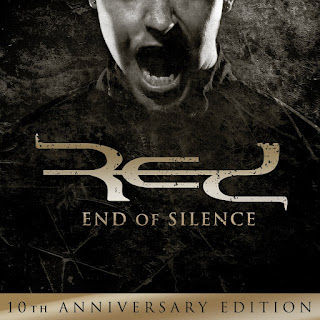 I don't know if this is becoming a trend, or if I am just noticing something that has actually been going on for a while now, but it seems to me we are seeing more album re-releases than ever before.  Now, I'm not talking nostalgia reissues here...I'm talking albums that are only a few years old (ten, in this case), that are reissued with new material and with singles being pushed again.  And perhaps I notice it more than the average person, especially with bands like Red and Jumpsuit Apparatus, for example, as I pay far more attention to the Christian hard rock charts than most people.  Regardless, Red (or their label) has decided to re-release the band's 2006 debut album, End Of Silence in this 10th Anniversary Edition, featuring slightly altered artwork, two completely new tracks, four acoustic versions of previously released songs, and updated insert information.

Without completely re-reviewing the record, let it be stated that it was obvious from the original release of this record that Red had something special going on.  The symphonic rock/metal movement that was in full-swing in the Christian market by 2006, as numerous bands were flirting with adding violins, violas, cellos, and all sorts of string arrangements.  (In all fairness, Christian symphonic thrashers, Believer, were doing this extensively back in 1993 on their Dimensions record...).  But Red was different.  Red didn't just add strings to their music; they built the string sections into the songs themselves, creating truly atmospheric and symphonic rock songs while holding onto their alt metal edge.  With the addition of the extraordinarily powerful vocals of Barnes, Red burst out of the gate doing something that other, more veteran bands were aspiring to add to their sound.  The result was an amazingly popular debut record that features the 2007 and 2009 Christian Rock Songs of the Year in "Breathe Into Me" and "Lost", as well as "Break Me Down", which was nominated for the same award in 2008.  "Already Over", which I feel is the most powerful track on the album, also received significant airplay on both Christian rock and modern rock radio, as did "Let Go", while "Hide/Pieces" was released as an additional split-single, as well.

On this new version, we are treated to two new songs and four acoustic remixes.  "If I Break" is a dark, somber song, featuring a brooding string arrangement and Barnes haunting vocals.  The first third of the song is purely Barnes and various acoustic stringed instruments, but the band punches itself into the equation at about the 1:45 mark, bringing the song to full energy and life, mixing it perfectly into the rest of the original record.  "Circles", meanwhile, was a "working demo" for the original record, and is 7 minutes of orchestral alt metal at its finest.  I am not sure if there were ever supposed to be lyrics and vocals for this song, but I have to say that I love the song in this instrumental version, as the instruments are given a chance to really shine here, especially the solid drum work of Hendrix and some really nice string arrangements.  There is also a particularly strong guitar line that works its way into the track at about the 5:30 mark that charges the track with a new, angry life as it grinds across the surface of the cellos and violas that continue to saw away in the background.  Powerful stuff.

The acoustic remixes are really not overly surprising, but they are very well done, with "Already Over" and "Lost" being essentially the same songs with just vocals and strings as the electric guitars and drums are stripped away.  "Hide" has its arrangement changed a bit to incorporate some really nice acoustic rhythm guitar work, while "Breathe Into Me" showcases some excellent layered backing vocals that are not nearly as obvious in the fully electric version.  If nothing else, these tracks serve to really highlight Barnes' powerful tenor and the intricate work involved under the heavier elements of each song, and I think they are nice additions, if not essential ones.

Also of note here is the band's decision to change the insert information.  There is a new, very brief biography of the band up to the point of signing their contract prior to the making of End Of Silence, as well as the inclusion of the lyrics for "If I Break", as well as some new writing info for the new tracks.  Most notable, however, is the change in the band's line-up reflected in the Anniversary Edition notes.  For those who may be new to the band, or for who possibly were unaware, Hendrix had left the band before the original release of this album, but he performed all of the drums except for on "Pieces".  Rauch, who wrote the majority of the music on this record, became a non-touring member in 2009, and has subsequently left the band.  (Whether an oversight or intentional, Rauch is not listed as performing ANY of the music on the reissue...)  The album has also been digitally remastered for this anniversary edition.

The packaging for the new version is now a slip-sleeve cardboard tri-fold package, rather than the jewel case offering of the first.  There are no new pictures added to the new layout, although the photo under the tray in the original release is now the face artwork of one of the new package's sleeves.  The color changes exemplified in the various versions of the cover art above are consistent throughout the new packaging.  My guess is this new packaging is simply cheaper.  The CDs themselves also look different, with the new disc a goldish color, as compared to the black and white of the original.  Not really big deals, although we all know I am a firm believer in the jewel case being the superior packaging form.  C'est la vie, I suppose...

So, is it worth it to pick up the new version?  I guess that depends.  Personally, I love the new version, as I think the two new songs are excellent additions that do add something to the original album, and the acoustic renditions are a nice touch, as well.  If you already have the 2006 version, and don't care about acoustic remixes, you can always just download the two new tracks and burn yourself a new copy of the record, I suppose.  If you have the band's other material, but had never gotten around to picking up this excellent record, then by all means you should do yourself a favor and pick up the definitive version of End Of Silence, which would definitely be the 10th Anniversary Edition.

If I had any real complaint, I wish the acoustic versions of the songs would have been placed at the end of the original record, with "Circles" and "If I Break" mixed into the original tracklisting, to help improve flow.  I think "If I Break" would've worked well right before "Already Over, Pt. 2", personally, and I think "Circles" could've fit behind just about any of the hardest songs here, although I know a lot of people don't like instrumentals interrupting the flow of a record.

Rating:  An 8 in its previous form, I recommend cranking the new version up to 8.5, as I feel "Circles" and "If I Break" really add a significant element to the re-release.

Posted by arttieTHE1manparty at 11:35 AM