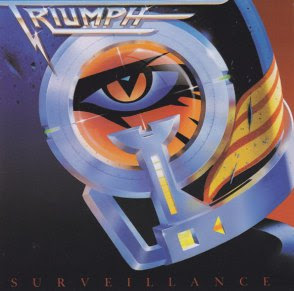 Every now and then I like to dig deep into my collection to pull out an artist or album that I feel is shamefully overlooked.  With this review, I cover both aspects, as I think Triumph should receive much more acclaim than they are afforded, and I feel this album is not even recognized by far too many hard rock/classic rock fans.

Despite international chart success, Canada's Triumph was, in my opinion, a criminally overlooked act, as I feel they were one of the best outfits of the 70's and 80's classic rock era.  A hard-rocking power trio, the band was sometimes kiddingly referred to as "the poor man's Rush", a moniker which I have always felt unjust and cruel, as I would take the best of Triumph over 99% of Rush's catalog any day.  Classic rock staples such as "Lay It On The Line", "Hold On", "Fight The Good Fight", and "Magic Power", as well as powerful albums such as Allied Forces and Never Surrender, are still considered to be among the best material to come out of that late 70's/early 80's hard rock scene.

The mid-80s found Triumph attempting to go in a more pop-oriented direction as they tried to garner more radio airplay to bolster their career after parting ways with RCA Records in 1984 and signing on with MCA Records.

Surveillance is the final album recorded by the band with all three founding members on board, as Emmett would become frustrated with the direction of the band and embark upon a solo career.  As such, bassist Levine actually referred to Surveillance as nothing more than a "contractual obligation" album.  Personally, I think this Surveillance is one of the top three albums the band ever put together and showcases some of the most aggressive, hardest-rocking guitar work from Emmett since the Allied Forces record.  I have no proof, but the record really feels like Emmett decided to make HIS Triumph record with Surveillance, especially following the frustration he has stated he felt with the band's previous album, the spotty, hit-and-miss effort, The Sport Of Kings.

It's hard to argue with the screaming solo in "Never Say Never", the hard-charging riffage found in "Headed For Nowhere", or the absolutely soaring guitar solo in "Long Time Gone".  Emmett, who I have long felt was among the most underrated guitar greats of his era, really flexes his muscle throughout the record, even on tracks like "Rock You Down", where lyrical cliches and cheese-filled choruses threaten to choke the life out of parts of the record.  Emmett's vocals, as well as his guitar, soar in "On And On", and the Kansas-tinged "Carry On The Flame", with its keyboard/synth flourishes and solid rhythm guitar riffing, is a strong example of the band working together at it's best.

Unfortunately, this album is two tracks too long, in my opinion, as "All Over Again" and "Running In The Night" both are too slow, too AOR for my tastes, although "Running In The Night" does feature a pretty solid...if too short...guitar solo from Emmett.  If these two tracks were carved off, I truly feel that Surveillance may be looked upon by hard rock/classic rock fans as the second best in the full band's nine album catalog (a tenth album, Edge Of Excess, was made with out Emmett in '93), behind only Allied Forces.

To the best of my knowledge, this album has never been reissued, but it is still fairly easy to come by at a good price.  I would strongly encourage fans of the band's best-known material, or fans of classic rock in general, to seek out Surveillance, if only for the chance to hear Emmett's guitar scream to life one final time in the band he helped found more than 40 years ago.

Rating:  Two weaker tracks to end the album...and a lame intro...are all that keep this from hitting 8 on the scale.  Crank this to 7.5!