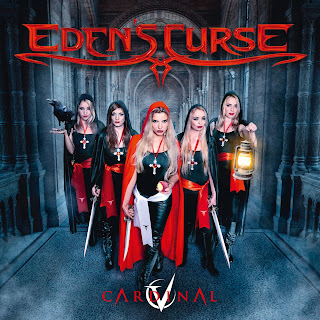 Eden's Curse is a band I have at least some passing knowledge of from their albums with the band's namesake, Michel Eden, on vocals.  At that time, the band was something of a power metal/symphonic metal band with huge vocals, tasty guitar runs and sweeps, and some really strong rhythms.  Not my necessarily my typical fare, to be sure, but I own the first two albums on CD and the third digitally, and pull them out from time to time, when the mood strikes me.

When Michael Eden left, I assumed the band was dead, so I was completely unaware of their new singer, and had no clue that they had put out Symphony Of Sin in 2013.  So imagine my surprise when I was sent this new album, Cardinal, for review, as I simply believed this band was no longer in existence.

The album starts off strong, with the first four tracks ranging from good to excellent, as the band flexes its musical muscle from the outset.  The record starts with "Prophets Of Doom", kicking things off in a familiar symphonic manner, reminding me quite a bit of something Avantasia or old Rhapsody (now Rhapsody of Fire) would have done.  A galloping rhythm and an underlying keyboard current support "Prophets of Doom", setting the stage for the big, sweeping guitars one would expect from this style of metal.  However, it's Mijik's vocals that are the big surprise here.  Sure, the lyrics are rather typical of this genre, bordering on a cheddar-fest at times, but I've never been one to complain about the dungeons-and-dragons, kings-and-queens lore-styled lyrics, so I wasn't put-off by what was being sung; I was more impressed with HOW Mijik was able to sing the lyrics.  I'm not sure what he has done in the past...if anything...but his is definitely a versatile instrument allowing him to sound somewhat similar to Tobias Sammet here, and then more like Jorn-lite on later tracks, such as the absolute beast on this record, the huge "Messiah Complex", which I will admit to putting on repeat for about half a dozen straight listens when I first got this record for review.  While it sounds more like an Allen/Lande song than anything from Eden's Curse's catalog, it is a monster of a track with some absolutely catchy-as-sin hooks, some really cool guitar licks, and an edge added to the vocals that really up the ante for this record musically.  In between these two tracks, "Sell Your Soul" and "The Great Pretender" are both strong numbers as well, with "Sell Your Soul" being the first real example of the band shifting gears since the loss of Eden on vocals, as there is a definite melodic radio rock feel to this track that wasn't really a part of older Eden's Curse.  It's not a bad song by any stretch, but there are some metallic sacrifices made here that make the song more accessible than "Messiah Complex", for example.  Still, no alarm bells go off for me through these first four tracks.

The first slip for me comes with "Find My Way".  The track starts off with some rather stylistically off-putting keyboard effects that don't fit this style of music all that well and really have no home with the rest of the record.  A nice, crunchy rhythm guitar steps in to help the track recover before disappearing entirely to leave Mijik and a piano as the sole workers on this track which for much of the first verse, before the band sweeps back in on what has now morphed into a big, Journey-esque power ballad type of song.  Yes, I said Journey-esque.  Take just a hint of the flowery flourish out of the keyboards, and exchange Steve Perry for Mijik, and I think you would agree that this track would have been all over AOR/Top 40/Mainstream Rock stations in the early-to-mid 80s.  The song just doesn't fit.  I'm also not a big fan of the keyboard solo that is interjected into the middle of the track, or of the way the keys take over chunks of the song in general. 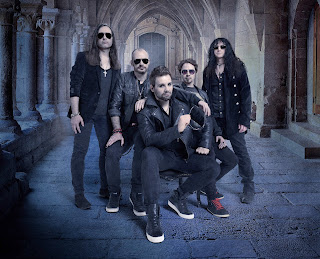 If "Find My Way" sounded slightly off from the sound of the rest of the record, "Kingdom Of Solitude" juts right out of this record like a third arm, musically.  This song has Extreme written all over it, from the funk-infused guitar intro to the keyboard horns, the boogie dance rhythm utilized in several spots on the track, and the Nuno-inspired guitar approach of the solo...and much of the rhythm riffing.  Lyrically, its not territory that Extreme explored, but musically, this could've been on Pornografitti or III Sides To Every Story rather easily.

"Utopian Dreams" heads the ship back in its original direction after being blown briefly off course.  The gallop is back in the music on this Stratovarius...or perhaps more Kamelot...styled symphonic track that includes the genre-typical keyboard runs and solos where true power metal bands would have dropped a blazing guitar solo or and extended fret flourish of some sort.  But, this is the genre that it is, and so if these things bother you to great degree, then Eden's Curse isn't a band you should be seeking out in the first place.

"This Is Your Moment" is a really strong rocker with a catchy hook, some really good backing vocals, and top-notch rhythm guitar work from Kohne.  Mijik's vocals really stretch toward the upper end of his tenor range here, and he proves himself more than capable of sustaining a note or ripping out a scream when necessary, then slipping back into that edgier Jorn-ish approach.  Good stuff here.

"Rome's On Fire" is probably my second favorite track here (probably switching on-and-off with "This Is Your Moment"...), and is one of the more straight-forward power metal tracks on the record, with big, thundering drums, top notch rhythm guitars, multiple mini-guitar solos, big backing vocals, and a really strong performance from Mijik.  Also, the keys take a more subordinate role here, which is what I typically prefer.

"Unconditional" is simple too saccharine for me to stomach, with its pop radio rhythm, the echo effects on the guitars, and the overly emotional female vocals of Liv Kristine threatening to push me into a diabetic coma.  Honestly, despite the weirdness of having pseudo Extreme and Journey tracks mixed in, this is the lone skipper for me as I seriously just don't enjoy it at all.

The album recovers to finish strong with both "Saints and Sinners" and "Jericho" both being top five tracks on the record.  "Saints..." is extremely catchy, with Mijik again showing his vocal versatility on this symphonic speed metal treat, and "Jericho" is the album's "epic" track, clocking in at just under eight minutes and featuring multi-layered vocals, several time changes, chorus-styled backing vocals, and some straight-from-the-80s power chords and rhythm guitars, interspersed with healthy doses of symphonic keyboard sweeps, some 70s-sounding synthesized Hammond organ, and high speed guitar-keyboard solo interplay.  A big song to wrap up a slightly uneven, but overall impressive album from a band I thought to be dead and gone.

The production is clean and all of the instruments are separated nicely, which is pretty typical of good symphonic metal.  Compression is not an issue here, as the sound is full and vibrant, with plenty of highs and lows throughout the mix.

The vast majority of Cardinal doesn't stray too significantly from the material the band was putting out with Eden at the mic, although there are some definite AOR/melodic radio rock elements mixed in now that I don't recall being a significant part of older records (I'll now have to pull those to check them out more closely, I guess), and the occasional oddball track slips in to challenge the flow of the record near the middle.  But, for the most part, if you are a fan of symphonic metal and/or power metal, Cardinal is going to be right there in your wheelhouse and I can't imagine you not enjoying the majority of the record.

Rating:  Crank this to 7, with the high points pulling more weight than the scattered low points.