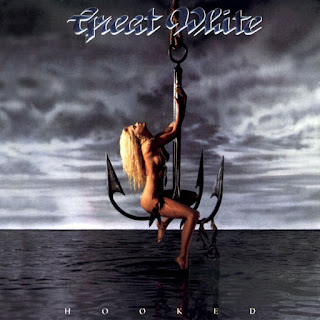 Everybody has that go-to album that they can pop in at any time and it instantly changes their mood for the better.  It may not be the most popular album a band has ever released, it may not even be by your favorite band, but that one album is a game changer for you.  For me, it just so happens that it IS an album by my all-time favorite band, Great White, but the first part of my statement rings true, as Hooked is definitely not the most popular album in the band's rather extensive catalog.  In fact, I would dare say it is one of their most underappreciated albums, despite it's musical greatness.

Now, I know that it's hard to say an album is underrated or underappreciated when it manages to chart Top 20 and sell over 500,000 copies, but hear me out on this.  Yes, it sold and charted well, but I have always argued that it did so on the basis that it followed up the MASSIVELY popular ...Twice Shy album and the band's biggest hit song, "Once Bitten, Twice Shy".  Had it not been for that album, and that song, in particular, there is a very good chance that Great White would have been little more than one of the dozens and dozens of hair bands of the 80s vying for attention in an over-saturated and often-under-talented market.  If that were the case, I dare say that Hooked would have been little more than a blip on the scene's radar despite the fact that I consider the album to be one of the highlights of the band's career. 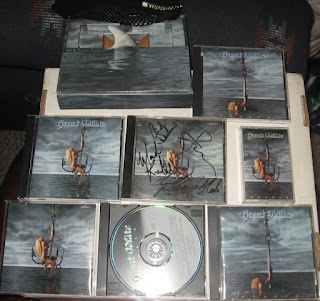 Personally, I own numerous different versions of this record.  Starting at the top right and going clockwise, there is the the "censored" pressing, the nude cassette version, an import censored pressing, the censored exterior/nude interior pressing, the Japanese double-disc reissue with the nude cover and the Live In New York album as a bonus disc, and the very cool Hooked promo kit that comes with a fisherman's net bag, held together by an imitation shark's tooth, surrounding an entirely different alternate cover on the outside and a CD and cassette on the inside.  The center disc is a censored exterior/nude interior version, autographed by the Jack, Mark, Audie, Michael, and then-new bassist, Teddy Cook.  I also own two vinyl versions, as well as all of the CD-singles from the album, both foreign and domestic, which included "Desert Moon", "Lovin' Kind", "Call It Rock N Roll", and "Congo Square". (Did I mention I love this record?)

Sure, some are going to say it's the collector in me, combined with the fact that I love this band, that gives the record such high praise, but I truly do feel that this album was where the band fully developed the "Great White sound", and where they really seemed to hit their stride musically and creatively. This was the last full-length album to feature Montana on bass, as he would depart after this record, but the "Core Four" of Russell, Kendall, Desbrow, and Lardie would continue on for several more releases, honing the sound that was really first developed on Hooked.  This style and sound included a lot more blues influence to their hard rock material, with far less of the "Hollywood hair" flair than had been previously employed.  The ballads, which Great White, and Russell in particular, is possibly most famous for, also incorporated a lot more soul and substance in their approach, going more for emotional content than "lighter in the air" power balladry.   Both ballad entries here, "Lovin' Kind" and "Afterglow" showcase this more 70s-inspired, soulful approach.

The rockers, meanwhile, are among some of the best ever recorded by the band.  "Call It Rock N Roll" starts the album off in fine form, not overly flashy, but to the point and indicative of where the band was headed with Hooked.  And while many point to "Call It Rock N Roll" as being a "Once Bitten, Twice Shy" clone, I don't find that to be the case at all, and actually prefer this track.  "Original Queen Of Sheba" is catchy 3-chord AC/DC-styled rock but with far superior vocals and more bluesy sass, and the Stones-esque "Can't Shake It" should have received airplay, in my opinion, at least on album rock stations.  Two of my personal faves from the band appear on this record, with the hard-hitting "Heartbreaker" sounding a bit like a throwback to the band's earlier sound, but again with a bit more blues and soul incorporated, and "Desert Moon" is catchy as heck and would likely have become a radio staple had it been recorded and released even 5 years earlier.  Sadly, "Desert Moon" will likely always be known as the song that was being performed when the fire broke out at the Rhode Island Station nightclub, forever altering the Great White story.  I also think that "South Bay Cities" is a particularly fun track, even if its not exactly the deepest song the band has ever worked on, lyrically, nor is it meant to be.  Jack's howl on the chorus is just a treat to listen to here, and "South Bay Cities" works very well to help inject some fun, laid back atmosphere into the more emotionally-charged mid-to-slower-paced tracks here.

Three singles were officially released from this record, with "Desert Moon", "Congo Square", and "Call It Rock N Roll" all achieving some sort of chart recognition in either the United States or United Kingdom, with "Call It..." actually cracking the Top 5 on Billboard's Mainstream Rock chart, while "Desert Moon" hit number 16 on that same chart.  "Lovin' Kind" was pressed as a single in Europe, as well (I have a copy, so I know it exists) but it received no push at all, and I've heard (but haven't verified) that the band was pretty upset with Capitol for not working that song, which they felt could have been a chart hit.  I'll have to ask Jack the next time I see him.

The bonus tracks on the reissue are, for the most part, throw-away for me, largely because I already have the songs from other compilations and live albums.  Still, if you can find it for a decent price, I suppose the reissue may be the best way to go if you are looking for musical quantity for your dollar.  All are cover songs, and none fits the flow or sound of Hooked overly well, but all are done well, with "Down At The Doctor" and "The Hunter" being the best two, in my opinion.

Russell is in top-notch form throughout the record, with his raspy tenor adding edge and sass to the rockers and soaring effortlessly on the ballads here.  Kendall's guitars are the perfect complement to the approach and sound of the songs on this record, with simple-yet-effective solos slipped into the mix, while he and Lardie work so well as a tandem on the rhythms throughout the record.  Lardie's keys are also a nice supporting character here, as well, not stepping on any musical toes by trying to jump out front to grab the spotlight, which is clearly not where they should be in a band taking a decidedly more blues-based approach.  Montana and Desbrow are locked in on the bottom end throughout the effort, whether the band is in full-on rocker mode or tackling a more honky-tonk, shuffle-styled track like "Congo Square".  Again, as I stated previously, I think the band really hit their musical stride here, as all facets of the band were clicking, from the individual performances to songwriting to the production of Alan Niven.

Rating:  Again, many will say it's because this is my "go to" record that I crank this record to a 9.5, but I argue that if people had heard the Hooked record before Once Bitten... or ...Twice Shy, this would be the style of Great White that most fans would grab hold of, and "Can't Shake It" or "Call It Rock N Roll" would be the hit that "Once Bitten, Twice Shy" has become.