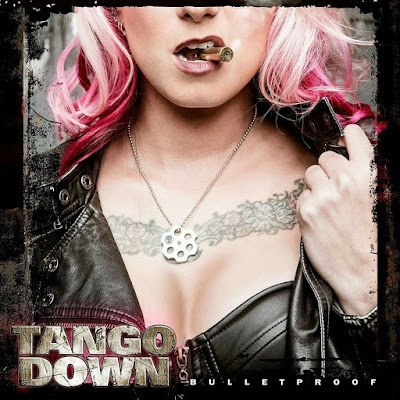 Hard as it is for me to believe, it's already been over two years since Tango Down released their excellent record, Charming Devil...and since David Reece left the fold of the band as lead singer.  Additionally, bass player, Ronnie Parkes, also exited the band, leaving just Miller and Michaels to pick up the pieces and attempt to assemble an outfit worthy of continuing on with the name Tango Down, as it has become synonymous with melodic hard rock of the highest degree.  Thankfully, and perhaps unsurprisingly due to the superb musicianship of Miller and Michaels, the band manages to not only pick up right where they left off, but to also surpass the level they had previously reached on earlier albums.

New vocalist Chas West (Bonham, Lynch Mob, Red Dragon Cartel) steps in and lends his smooth, soulful vocal talents to the new record, Bulletproof, as does new bass player, Axel K. Gessrier.  As a testament to the professionalism and talent of these two men, the band comes out firing on all cylinders on the new record, with "Punching Bag" immediately setting the tone for this new effort, showcasing a very tight-sounding band, despite the changes, on this upbeat, sassy track.

As good as "Punching Bag" is, it's on the next track, "Give Me A Reason" that the addition of West as vocalist really shines through.  While Reece is a fine singer, no question, West's smokier, more soulful style really carries a lot of emotional weight on this smooth, more mid-tempo melodic rocker.  Beautifully layered backing vocals also serve to enhance this track which also features a tasty little guitar solo and solid rhythm work.

"Bulletproof" is up next and the edge returns to the sound on this hard-hitting track that is highlighted by one of Miller's best solos on this record, an interesting acoustic moment before the last chorus section, and more of West's excellent vocals.  The chorus is simple, to say the least, but it is also highly infectious and allows West to demonstrate his command of his range by simply adjusting his intonation on just one word...bulletproof.

"Carry On" is another catchy rocker that really recalls a band like House Of Lords for me, with a solid hook, a throbbing bass line, searing guitar solo, and...dang it, I'll say it again...some of the coolest vocals I have heard in this year's batch of albums sent to Glitter2Gutter for review.  I honestly thought losing Reece would be a bigger deal for the band than it turns out to be, because I truly feel that West trumps him in nearly every way.

Perhaps part of this is due to the supreme quality of the songs on this record.  Take for example the next track up, "When We Were Young".  Not only a nostalgia trip lyrically, the song just has that magical quality that makes you want to hit the "repeat" button multiple times so that you can sit back and let the music flow over you.  And when a song is written this well, the addition of a vocalist who can command they lyrics is icing on the sweetest of cakes, which is what I think this song is on Bulletproof.  Definitely my favorite song on the record and a candidate for song of the year for me.

Big drums come thundering back in on "Going Under", but a smoother, more melodic guitar approach reins the track back in before it become some big, bombastic arena number (which isn't necessarily a bad thing...it just wouldn't fit here).  This song is a bit more laid back and reserved than the majority of the material here, and it is probably my least favorite track on the record, but by no means is it a bad song at all.  Gessrier's bass is definitely given a voice in this song and he proves himself to be a more-than-capable player in this exceptionally tight melodic machine.

"Superstar" smacks you across the face if you happen to drift a bit during "Going Under", with gritty guitars and punchy drum work driving this hard rocking track that finds West sounding, ironically, somewhat like Reece did on Accept's Eat The Heat album.

"Edge Of Goodbye" is the album's big ballad moment.  Featuring a piano intro from Kivel labelmate, Jace Pawlak, the song remains relatively quite and restrained during the verse sections before building and soaring during the chorus sections.  Lighters will be held high, to be sure, if this song finds its way into the band's live sets, and with good reason.  Miller contributes a great, emotionally-charged solo on the outro to the track, by the way, and listeners should be sure to go back and give it the attention it deserves.

"Anything Can Change" returns to rocking mode for the band, leading seamlessly into the gritty, dirty rhythms of album closer "Broken Heart", which finds Maxx Explosion/House of Lords drummer, BJ Zampa, occupying the seat behind the kit.  Some nice keyboard work provides a solid support structure for this track without becoming a distraction, and the bass and rhythm guitar work here is extremely tight.  Miller again melts his way up and down the frets of his guitar on another ripping solo, and West leaves no doubt that he is the man in command of the mic now as the album comes to a close.  A stellar way to end a record, to be sure!

Perhaps the most overlooked and underappreciated contributor to this entire project is Ty Simms of Bombay Black, who once again lends his prodigious talent to the production, mixing, and mastering of the record.  It's hard to say enough about the talent of this man and the way he helps bring the best performances out of the bands he works with, and the work he does on Bulletproof is no exception.

It's also important to note the work of Erik Johnson on this record, as the backing vocals are a huge part of what makes this album click.  It's amazing how well his voice, and those of his assembled cast, help to round out the overall sound of Bulletproof, and I love the way those vocals are layered to add depth to several cuts here.

Also playing a big role in this record's success would be the slew of Kivel stablemates who contribute to the songwriting here.  Shawn Pelata (Livesay/7HY/Final Sign), Pawlak, Jimi Bell (Maxx Explosion/House of Lords), and Zampa (Maxx Explosion/House of Lords)...along with Mr. John Kivel, himself...and a few others, all put pen to paper in some fashion in helping to create the songs on this record.  Miller had a hand in writing or co-writing half of the tracks here, as well, and it goes without saying that no matter how good a band is, they have nothing to work with if the music is of poor quality.  That is definitely not the case on Bulletproof.

As is typical of Kivel products, the packaging is top-notch, with a full-color, 16 page booklet filled with lyrics, writing credits, and thank yous...not to mention the return of the gorgeous cover model Azarja van der Veen (is she an official member now?).

Rating:  Roaring back better than ever, Bulletproof is top-notch cranking material!  Twist the volume up to 8.5!

Back To Reviews Index
Posted by arttieTHE1manparty at 12:03 PM