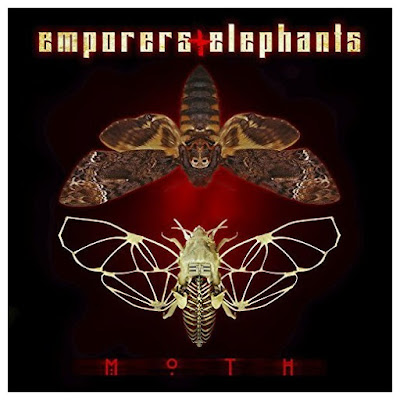 Chicago heavy modern rockers, Emperors And Elephants, return with their sophomore album, Moth, on Pavement Entertainment.  This is also the first album from the band following the unfortunate death of founding member, Jeff Windisch.  Moth had already been completed before Windisch's passing last August, but the band shelved the album as they took some time to figure out what they were going to do going forward.  The decision was made to continue on in honor of their friend's memory, and Moth was released to the public on March 17, 2017.

Picking up where their debut album, Devil In The Lake, left off, Moth features heavy, down-tuned, grungy guitars, big, punchy drums, and thick bass work, along with the unmistakable vocals of Andrews, who can exude hurt and pain and anger with his style in a way not many others appear able to do these days.  This is evident from the moment "Hidden" comes churning out of your speakers in a very Alice In Chains-like manner.  Follow-up track, "Not Today" packs quite a punch, as well, with the thunderous drums from Meudt carrying much of the weight of the song while the metallic-edged guitars grind atop a bed of electronic effects that pulse across the bedrock of the song.

The highlight of the album for me is, without a doubt, the hurt and angry "Porcelain Kiss", which finds Andrews lamenting the breakup of a relationship while also spewing all sorts of venom toward the person who tore things apart with their cheating and betrayal.  Leading in with just Andrews' voice, the song alternates between softer, more laid back vocals on the verses and then ramps up the angst on the choruses while the guitars charge over the top of the backdrop of Meudt's drums and Vander's bass which carry a catchy rhythm throughout the track.  Check the video out below.

"Poison" hints at being a quieter song for just a few moments, but the chunky rhythm guitar bursts and bumping bottom end of Meudt's drums quickly betray this tease.  Again using a softer-verse/harder-chorus vocal pattern, Andrews drops his voice to little more than a whisper in spots, really adding to the atmosphere of the verses before he cranks it back up over the swirling guitars of the chorus sections.

"Chicago" is an interesting track that I find myself drawn to.  The chorus is extremely catchy on this definite nod to the 90's hard-yet-quirky alternative sound, particularly in the guitar tones used as the song transitions out of the chorus.  Andrews plumbs the depths of his vocal range on the first few verses here, and there is a nice, fuzzy feel to the production throughout the track.  A nifty guitar solo is thrown in here, as well.

"Give Away The Sun" instantly changes tempos with some frantic rhythm guitar work and a simple, snappy snare drum that gives the track a sound unlike anything else on the record.  Once the full band kicks in, and especially once the chorus hits, I hear hints of early Soundgarden (think Louder Than Love or Badmotorfinger era), in the fuzzy aggression of the guitars and the plaintive sneer that Andrews adds to his vocals.  A short, but decidedly metallic solo screams through the middle of the track, leading into the final run of the chorus, with multiple tracks of vocals all swirling together at the end.

"Jester" has an epic feel to it...although at just short of four minutes, there are those who will wonder what I am talking about throwing around a word like "epic".  But it's more in the way the song is put together than how long it is that gives me that epic feeling.  In fact, sometimes I find myself comparing it in my head to "November Rain" from Guns N Roses, with the mixture of the piano into the big, layered guitars that come out of Jesse's vocals-only intro.  There's the big, emotive, bluesy guitar solo included that exits as the song drops down to a scaled back interlude of sorts, before building back into the chorus.  I don't know...call be crazy, but its my vision in my head, dangit, so I'm sticking with it.  Regardless of if it matches in YOUR head, I'm sure you will agree that it is a really cool song.

"Trigger" is another one of my faves here, as the guitars are nice and chunky with a really cool solo in the mix, as well.  One of the things I particularly enjoy about this song is the relatively upbeat manner in which Jesse delivers his vocals despite the fact that the lyrics are actually rather dark and angry.

"Whisper In The Storm" is definitely one of the most laid back songs on the album, but not in the way one might think upon reading that description.  It is definitely not a ballad, but there is a calm, almost serene way that the song is delivered, even when the guitars really start to charge and the drums begin to pound as the song ramps up to the chorus.  I absolutely love the guitar solo here, and while I am not 100% sure, I believe that Windisch actually performed this choice piece of musical art which really showcases the talent that he had.

"Hold You Back" is much closer to ballad material, but it still isn't lighter-in-the-air power ballad type stuff.  Think more along the lines of "Rooster" from Alice In Chains, or similar 90's hard-edged grungy rock, as a reference point for the type of ballad work I am talking about.

The album closes with a new version of the band's interpretation of Chris Isaak's "Wicked Game".  Andrews makes no attempt to climb the vocal ladder that Isaak does on his version, rather adding a darker edge to his vocal approach.  I asked Jesse about why the band chose to re-record the song...again...and he told me, "Ya know, it was just kind of thrown on.  We actually recorded that for the deluxe copy of Devil In The Lake.  It was only digitally released, so not that many people heard it.  It was already years after the record (Devil In The Lake) was out, so we just figured we would throw in on Moth for everyone to just enjoy."  The song definitely retains the same style and melody as the original, but the guitar work on the E&E version is stronger, in my opinion, and Andrews vocals add a quality not found on the original.  An odd cover? Probably for most people, but no one I have let hear the song has had anything bad to say about it, and its funny how many of my hard rock and metal fans actually know the original from Isaaks, which is a decidedly non-metal thing to admit.  Very cool to hear a band like E&E stretch their musical wings and attempt something so far out of their element.

The production is pretty solid here, with good separation of the instruments and a nice use of modern electronic elements without allowing them to dominate the overall sound of the record.  This is definitely a step forward from the debut album, which sounded a bit thin in a couple of spots.  Mine is a digital review copy, so I cannot comment on the packaging at this time.  I hope to snag a CD very soon.

As much as I liked Devil In The Lake, I find that I enjoy Moth even more.  The grooves are thicker, the punch is stronger, and the angst in Andrews' vocals is even more prominent than on the first record.  Even more, the songwriting is stronger here than on the first record, which found itself coming off as a bit samey in the middle section.  Not the case here at all, as Emperors & Elephants keep things interesting with varied tempos and song structures.  There is no particular weak spot in the track listing here, and I find that my favorite section of the record really changes depending upon my mood.

Moth is an album that I find myself returning to time and time again, like a moth to the fla...nah, I just can't do it.  I thought about it, and while I may really want to deep down, I am simply not that guy.

If you get a chance to catch these guys as they tour across the country, make sure you do so, as their stage show is equally entertaining and they are very personable guys who like to talk with their fans.

Rating:  Definitely crankable, turn this one up to 8!

Posted by arttieTHE1manparty at 8:15 PM