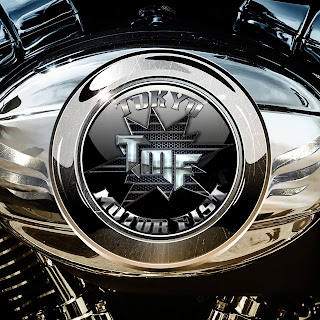 When I was first sent this album for review, I have to admit to being rather underwhelmed at the prospects.  Ted Poley is a fun guy to meet and a really good singer, but outside of a handful of songs, I was never much of a Danger Danger fan.  A lot of the songs just didn't do anything for me.  And Steve Brown was always, in my mind, a really, really good guitar player in the talented, but not overly memorable Trixter.  I liked them more than Danger Danger, and their 2015 effort was a surprisingly good return for Trixter, but there were too many moments in the band's catalog where I felt like the songs were thrown together around Brown's prodigious guitar soloing and lacked much in the way of substance or originality.  And both Smith and Burgi are accomplished musicians in their own right, but both have been supporting roll players, to be fair, and didn't do anything to up my enthusiasm at the idea of a "supergroup" forming here.  I was anticipating a rather bland, derivative sounding band with some rehashed guitar licks and overly-cliched lyrics

Rather than sounding like Poley fronting Trixter, Tokyo Motor Fist (do I want to know what the name means???) is a hard-hitting, melodic rock monster that bears more than a passing resemblance to the best stuff that Trixter ever recorded, with a healthy dose of Nelson, Bon Jovi, and even Hysteria-era Def Leppard thrown into the mix.  Take for example the huge, arena-shaking opener, "Picking Up The Pieces".  Big, pulsating drums, a catchy riff, sweeping guitar solo, and sing-along chorus were the perfect combination for a massive MTV hit in the late 80s/early 90s, and they work exceptionally well here, also.  Yet, despite the fact that this should sound dated, it absolutely doesn't.  Yeah, yeah, this isn't the type of rock hitting the radio waves these days, but this doesn't sound like a cutting room floor leftover track, as it is injected with so much power and punch...along with a modern crispness to the production that wasn't to be found in those glory days gone by.

"Love" does have something of a Danger Danger feel to it, but it is mixed with a Def Leppard vibe, as well, creating a very well-executed ballad that doesn't get too airy or dreamy in the production, nor does Poley come across as too sugary or sappy in his vocal approach.  If this song comes out in 1989 and not 2017, it is guaranteed that "Love" would have been included in every Monster Ballads compilation ever made, and Zippos would have threatened the fire codes of every venue the band would have played in.  "Don't Let Me Go" rivals its album-mate for best ballad here, with its emotional chorus, sweeping guitar solo, and heartfelt acoustic guitar line that really serve to enhance one of the best performances I have ever heard from Poley on a ballad.  Color me impressed here.

"Get You Off My Mind" spans the gap between balladry and rocker here, and reminds me of so much of the best mid-tempo stuff Def Leppard did on Hysteria and Adrenalize.  There's the nice, slow build, the big melodic hook, the layered vocals, a tasty little solo, and a sing along chorus very much in the same vein as "Hysteria", "Animal", "Have You Ever Needed Someone So Bad", etc.  Really, really good stuff here.

As far as the rockers go, there are so many great ones to choose from here, it is actually hard to pin down just one or two as favorites.  "Love Me Insane" is definitely a contender for me, with its big hook, ripping solo, and some of the best vocal work I have ever heard from Poley, all wrapped into one song.  "Black N Blue" is a nice rocker with a bit of a guitar punch, and I already mentioned the album opener which really sets the stage, in my opinion.  But if forced to nail down one track as the pinnacle for me, I think "You're My Revolution" would be my choice, as it is one of the most driving tracks on the record, with some really good drum work given a bit more punch here than on some of the other tracks, and the guitars are charging hard right out of the gate.  "Put Me To Shame" gets some serious consideration, also, with its early Leppard guitar tone...not to mention the COMPLETELY Leppard-esque backing vocals on the chorus...colliding with a song that would've fit in as one of the better Danger Danger songs from the first two records.  I also really enjoy "Shameless", which, like several other tracks here, would've been all over MTV and radio 25 years ago.

To my mind, this has the feel of a best of record, because there is no truly weak song here.  I would venture to guess the band recorded a LOT of songs before selecting these 11 as the ones to represent the band on this debut record.  The flow is flawless, there are no weak songs, and the musicianship is top notch.  And as to Poley, I do not think he has ever sounded better anywhere, including the Danger Danger or Poley/Rivera releases, which is saying something, in my mind.  The production is crystal clear, the mix is stellar...I honestly don't have much negative to say about Tokyo Motor Fist other than I have no clue what the name means!

Mine is a digital review copy, so I cannot make any comments on packaging at this time.

Rating:  Definitely a crank-worthy effort from a band I really, REALLY hope is more than a one-album-supergroup!  Crank this to 9!

Back To Reviews Index
Posted by arttieTHE1manparty at 9:14 AM