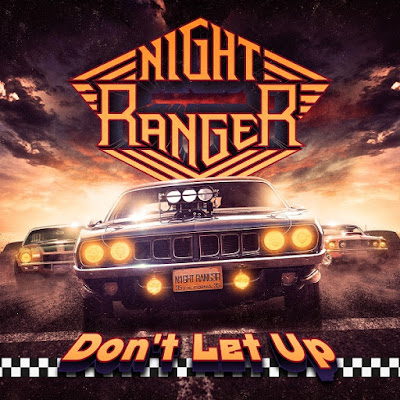 Night Ranger has quietly long been a Top 20 band for me.  The first four albums from this San Francisco band are essential hard rock, in my opinion, and featured enough edge to keep the hair metal crowd happy, while also being just pop enough to consistently garner radio airplay and appeal. Man In Motion is also a solid, if less spectacular record, and the post-Blades album, Feeding Off The Mojo, has some good moments, but it was definitely missing something, at least for me.  Oddly, when Blades returned from his successful stint in Damn Yankees, Night Ranger didn't automatically return to the level of greatness I expected from this band, as the next three albums were rather flat affairs that were spotty in their songwriting and, well, rather uninspired in their performances, outside of a song here and there.

But then Frontiers Records stepped in...

As has seemed to be the case with many classic era bands on the Frontiers roster, there is a resurgence of energy and life in the last couple of Night Ranger releases that had been missing since 1996.  Starting with their first Frontiers album, 2011's Somewhere In California, Night Ranger began to really sound like Night Ranger again.  2014's High Road took another step forward in their road back, bringing still more energy to the table as well as mixing in a couple of little twists to keep the sound fresh while still sounding like, well, like Night Ranger.  That newfound energy and creativity not only continues on Don't Let Up, I would say it surges to a level not seen since Big Life in 1987!

Longtime member, Joel Hoekstra has departed the band for the new record, and Keri Kelli has supplanted him as the second guitar slinger for the band, bringing with him all of the vast experience he has garnered while working with Alice Cooper, LA Guns, Ratt, Warrant, Skid Row, Pretty Boy Floyd, and so many other classic 80s era bands over the years.  Eric Levy, who was brought on board on Somewhere In California, rounds out the current line-up alongside founding members Gillis, Keagy, and Blades, completing the five-man ensemble that Night Ranger has used throughout its most successful periods.

I don't feel like I need to go song-by-song through the record, because long-time fans of the band are the target audience here, and, as such, the album is chock full of the exact type of hard rock goodness you would expect from Night Ranger.  Top notch rockers here include "Somehow, Someway", the uber-catchy "Running Out Of Time" (which may be my favorite song here), "We Can Work It Out" (no, it's not a Beatles cover...relax), "Comfort Me", "Jamie" (another song-of-the-album contender), and the title track.  "Sister Christian" fans will have to wait for the next album if they are seeking another huge power ballad, because this record doesn't have anything that slow, although "Truth" is a less-raucous mid-tempo track that will tide many fans over.  Also worth noting here is the album's closer,  "Nothing Left Of Yesterday", which, again, is more of a mid-tempo number than a true rocker, but the real kicker for me here is that this sounds an awful lot like a Damn Yankees song to these ears, which is dang near as good as a Night Ranger song!

While it doesn't reach the level of the band's first three records, Seven Wishes, Midnight Madness, and Dawn Patrol, Don't Let Up is a definite keeper, with all of the classic hard rock elements in place...minus the power ballad...even if all of the classic players are not.  The additions of Levy, and especially Kelli, bring a freshness to the familiar feel of this great band, and that "magic" feel has returned that I felt so connected to back in the 1980s.  The songs are well-written and nearly perfectly played, and the production is absolutely spot-on throughout the record.  Try as I might, I have a hard time finding any major flaws, and only a couple of "lesser" songs (which really aren't bad songs, at all...), keep me from pushing this all the way to the top.  I truly love this record and haven't been able to take it out of my player since I got it.

Rating:  Crank this sucker to 8.5!  Don't Let Up feels like the closest thing to a vintage Night Ranger album since their return, and I feel it likely cracks the band's top 5 albums...top 6 for sure!

Back To Reviews Index
Posted by arttieTHE1manparty at 7:33 PM