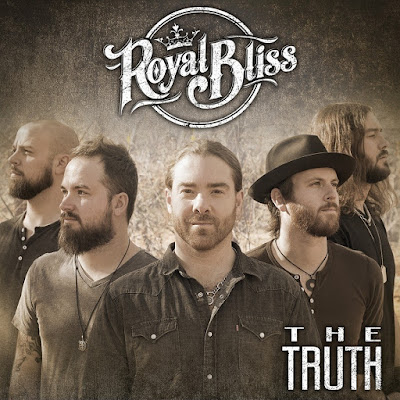 How in the world did this EP from Royal Bliss slip past me unnoticed?!  Who the heck forgot to tell me it was out?!  Someone needs to pay for this slight, I'll tell ya!

Anyway...  One of the most underrated bands in music today, in my opinion, returns with a five song EP called The Truth.  And, in truth, his EP could have just as easily been called the Donnie And Marie EP, because there is no denying that the band's sound here has them ranging both a little bit country and a little bit rock n roll.

The EP starts off with a very familiar Royal Bliss vibe, as the title track is a definite rocker that would have fit very well on either of their previous two full-length albums, the phenomenal Waiting Out The Storm, and the nearly equally great Chasing The Sun.  The track opens with some hard pounding drums and a nice, churning rhythm guitar line before Middleton's soulful vocals come gliding into the first verse.  The chorus is a typical, story-telling styled section that Royal Bliss does so exceedingly well, and even the guitar solo has a nice, gliding quality to it, lending the song that comfortable quality that makes you feel like you may have heard it somewhere before...even though you know fully well that you never have.

"We're All Living The Dream" takes a slight...and I mean "slight"...step east toward Nashville, but there is absolutely nothing on this track that is any more country than "Bleed My Soul" from Waiting Out The Storm, or "Home" does on Chasing The Sun, and the chorus section actually reminds me more of the kind of sing-along song that Neil Diamond might do than it does an actual country song.  At times a bit gospel sounding, and at other times very patriotic sounding...especially with the drum cadences..."We're All Living The Dream" is mid-American roots rock at it's finest, and I have to feel that somewhere, John Mellencamp is grinning as he hits repeat on this track.

"Racin'" slips a bit further into country territory, but I have to tell you, I really like this song.  Middleton has a way of writing songs that feel like an old sweatshirt...so completely warm and comfortable and familiar...that I find myself not really caring how the song is pigeon-holed or what niche it is put into.  This is a band that knows who they are and who play what they like, and it really shows on a song like "Racin'".  Could it end up on CMT or GAC?  Sure, I suppose it could.  But don't start thinking that you're in for some kind of steel guitar, fiddle and dobro hoedown song here, because that is definitely NOT what the song is about.  Rather, its a somber tune about being out on the road and dealing with the choices that we make...or don't make...and is not all that dissimilar to a song like "Crazy", especially the "non-rock", original version from Waiting Out The Storm.

"Drown With Me" combines the rock sounds of the last two albums with the good-time, hard drinking party attitude of a lot of country songs.  I discovered that this song was available quite a while ago as a digital-single, but as a typically non-downloading music consumer, I didn't know about it until this EP snuck up on me.    There is a little bit of banjo in the song that becomes evident in the second verse, but it's not like we're listening to Roy Clark on Hee-Haw here; think more along the lines of Keith Urban on some of his most rocking numbers.  Speaking of rocking numbers, it's like someone lit a fire under the band at about the two minute mark, as the guitar solo section is performed at such a frantic pace it almost doesn't even feel like the same song!  There are some cool gang vocals at work here, and one of those stupidly-addicting sing-along choruses that tend to irritate you (in a good way, of course) once they are stuck in your head for about a week straight.

"Goin' To Hell" has a definite country flair to it, especially with the picking on the acoustic guitars and the railroad rhythm of the drums, but there is still a lot of rocking in this high energy foot stomper that may be my favorite song on the EP...if "The Truth" isn't my favorite...or if "We're All Living The Dream" doesn't hold that title...  You get my drift, I'm sure.  The band semi-name drops their last album, as Middleton sings about "waiting out the perfect storm" not too long before they break into a rip-roaring jam session to close the song, and the EP, in pretty typical Royal Bliss fashion.

Look, like I said at the outset, there is a definite country element that is mixed in here, but I would argue that Royal Bliss ALWAYS had a bit of that in a lot of their songs, especially with the sing along choruses and the heart-wrenching ballads.  Like I said, a little bit country, a little bit rock n roll.  But, I'll be danged if this isn't an excellent little EP that I really wish the band had stretched out into a full-length record.  I guess it will just have to tide me over until the next album that I knew nothing about finds its way to my hands and ears.

Rating:  Call it what you want; I'm calling it crankable!  Crank it to 8!

Back To Reviews Index
Posted by arttieTHE1manparty at 7:48 PM