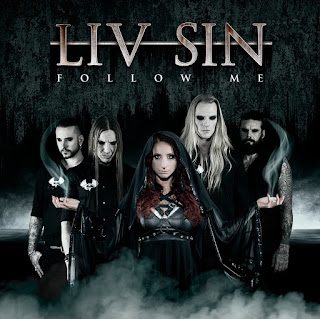 
I can't say I was overly happy when Sweden's Sister Sin decided to call it a day.  In fact, I was downright bummed.  I really, REALLY enjoyed what Sister Sin was doing, and, in particular, the way that lead vocalist, Liv, set herself apart from so many of her peers, both male and female.  She brought an edge, an excitement, and attitude, and yes, a sexiness, to the band's brand of metal that is missing from so many other, similar bands.  So, as soon as I was sent the lead single, "Let Me Out", from Liv's solo record, it should be no surprise that I was instantly ecstatic and wanted to hear more!

From the outset of the record...from the very first moment that the full-on metal guitars and thundering drums come exploding from your speakers on "The Fall", it is clear that Liv Sin is not here to kick back, relax, and rest on her musical laurels.  No, rather she is her to kick ass, take names, and make your ears bleed if at all possible.  If anything, Liv Sin (the band) is actually a step heavier than Sister Sin was on the majority of their songs, and that is clearly evident from track one.  Heavy as stink, yet still melodic, "The Fall" is chock full of speedy, grinding guitars, fret-running solo work, huge drums, and the unmistakable rasp of Liv's awesome vocals.  To be honest, the first thing I thought of when I heard "The Fall", and several other tracks on this record, to be honest, was the Judas Priest masterpiece, Painkiller.  That type of speed, aggression, and vocal angst is present more often than not throughout the entirety of Follow Me, which is quite a statement to make, as I absolutely love Painkiller.

"Hypocrite" keeps up the hard-charging metallic onslaught, with the shredding guitar work from Ankermark and Bertzell absolutely blazing their way across the pounding foundation laid by Bjelovuk's drums and Winther's bass.  In fact, Winther gets a chance to shine on his own a bit, as there is a nice little rumbler of a bass lead-in to the bridge of this song, which is a cool change up from the rest of the scorching, screaming guitar work.

Lead single, "Let Me Out" is up next, and while is backs off the pace ever so slightly, the metal is still served up in massive doses her, as well.  The chorus reminds me a lot of Helloween's "I Want Out", largely because of the three-syllable simplicity of the lyrics and the higher-ranged gang vocals used to such great effect here.  The guitar solo is a great piece of work here, and Liv is at the absolute top of her game here with her angry, snarly rasp perfectly delivering the intensity of the song.  Great stuff, indeed!

"Black Souls" leads in with a cool little interlude before all hell breaks loose on a song that, quite honestly, bears a striking resemblance to black metal in the way the rhythm guitars are used in the background, constantly churning up and down the chords in frantic fashion, yet the rest of the song remains firmly rooted in melodic metal, so there is no need to break out the Viking helmets or sacrifice any goats here.  Not my favorite song by any means, but not a skipper, either, "Black Souls" really showcases the versatility of the band and their ability to meld different metal styles together.

"Godless Utopia" utilizes a rocking bass-and-drum line as the support structure for the first half of the verses before the rhythm guitars jump in and start chug-chug-chugging along, powering the song forward toward an oddly timed chorus, then charging right back out again and starting the cycle all over again.  Things really slow down in the middle,,,dare I say they bog down...before the final chorus, which kind of throws me for a loop here.  Again, its not necessarily a bad song, but it is definitely my least favorite track on the album.

"Endless Roads" is pure ear candy, especially for the Sister Sin fans who may be feeling a bit shell-shocked by the relentless speed and metallic assault of most of the first half of the record.  Catchy, hooky, melodic, and more in the vein of traditional 80s metal, "Endless Roads" has a bit of a Warlock feel to it musically, and Liv is given more of a chance to really stretch her vocal skills.  This song is an absolute treat and has been given the "repeat treatment" on more than one occasion as I spin this record.

"Killing Ourselves To Live" comes in with a rather moody intro, then rips the cap off and just starts blazing away throughout the verses that touch on thrash metal in the juxtaposition of the drums and rhythm guitars, although there is a melodic, more traditional element, especially in the chorus section, that keeps it from blasting completely into Schmier's favored metallic style.  The combination of the two vocals here is pretty cool, and the two singers work extremely well together.  I would love to hear Liv take a guest spin on a Destruction record at some point, as she definitely has the chops to keep up.

The record just continues to blaze on with a combination of speed-and-traditional metal, never letting up on the listener, even in the slightly slower moments.  I think it was an interesting choice for the band to tackle a Rob Halford song here...albeit NOT a Judas Priest track...when they take on "Immortal Sin" from Halford's post-Priest band, Fight.  The song chug-chugs along with some really nice bottom end, and Jyrki 69's lower register, doomier vocals are a start contrast to Liv's higher ended snarl, and overall it works very well.  While The 69 Eyes is absolutely not my style of music on its own, the combo of voices is great here!  A bit sludgier than Fight's version, the Liv Sin take on "Immortal Sin" is impressive because it isn't an easy grab to make for a "new band" to tackle a lesser-known track from a legend's side band.  In fact, I'm guessing that unless you are a die hard Halford or Priest fan, it is entirely possible you wouldn't even know this was a cover song, and that would be just as well because Liv Sin really makes it their own, in my opinion.

The album's closer is basically an emotive ballad for the first half of the track before the speed picks up and the song turns into a nice, heavy-yet-melodic anthem that rounds out the record in fine fashion.

The production is really good here, and the band is very, very tight throughout the record.  I love the guitar tones used throughout the majority of the record, and the drums are nice and heavy, yet don't blow away or bury any other instruments.  Produced by Fitty Weinhold (UDO) and Stefan Kaufmann (Accept/UDO), the metal is the main ingredient here, without tons of flash or polish, which serves the record well.  Top notch work here, for sure.

Is this Sister Sin?  No, it is not.  Generally heavier, and certainly faster in several places, Liv Sin has enough elements of her previous band to carry fans over, but there is even more metallic goodness here than in her previous work, and metalheads who may have dismissed her in the past are likely to sit up and take notice now.  In fact, I would go so far as to say Liv Sin will make more fans for older Sister Sin material than the other way around.

Rating:  A truly top-notch metal record.  Crank this up to a blazing 8.5!  Metal has a new vocal queen and her name is Liv Sin!

Posted by arttieTHE1manparty at 6:05 PM