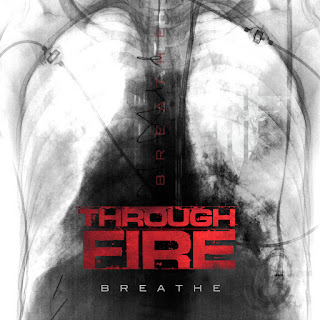 Driven.  Anyone who has ever met Omaha, NE's Justin McCain would likely agree that driven is possibly the key adjective to use when describing him.  I've met him several times over the years here in Nebraska, and the guy is laser-focused, whether it is on-stage, working with the fans after the show, or in the business dealings of the band.  Yeah, sure, he's talented, but his drive to keep his musical dreams going through everything he has been confronted with is the key to why he, and his bands, is even still relevant in the ever-changing musical landscape modern rock/hard rock/metal landscape.

Why did he scrap his previous band, Emphatic, despite multiple charting singles, number one songs on Octane, and touring slots with bands like Red, Gemini Syndrome, and others?  Not a clue.  If I had to guess, it was a contract thing, but I have not had the chance to talk with Justin about the move, and I'm not overly sure that it matters now, as Through Fire has already found themselves picking up right where Emphatic left off, garnering airplay for "Stronger" and "Breathe", and getting "Stronger" picked up by the WWE, the NHL for the Stanley Cup Finals, and in movies, and latching onto tours with Sick Puppies and Nonpoint.  New album?  New name?  No problem, it would seem,

Breathe has recently been reissued in a "deluxe edition" format to help the band continue the momentum they have gained on this first effort.  Repackaged with acoustic and "extended" renderings of the album's two big hits, "Stronger" and "Breathe", this deluxe edition also comes with guitar tabs for those two songs, extended liner notes, and a band sticker, all packaged in a newly designed digipack (dangit!).  Also included is a new cover, as the band provides their take on the song "Jar Of Hearts", previously released by Christian Perri.  I'll be the first to admit I had to find the original song on YouTube, because I knew NOTHING about the original.  If you are like me, I will let you know that Perri's version is a rather emotional, piano-driven ballad, with absolutely ZERO rock to it.  The version included here, while remaining something of a ballad, definitely has some rock to it, with the band's typical buzzsaw guitars, programmed elements, and some really solid drum work from Mussack driving things along. I would imagine that this new track will find its way into live set lists, as I have a feeling that fans will start clamoring to hear it live.

For fans of the previous band, Emphatic, it is worth noting that "Damage" was an old Emphatic song that has been somewhat reworked here, and "Stronger" was actually an Emphatic song as well from before they were signed to their major label debut, and I SWEAR I have heard it in a live setting before.  Both are solid modern rock/active rock numbers, with "Stronger" being insanely infectious, especially with it's chorus, which is presented both in a cleaned-up, radio friendly version with "forget that" replacing the "extended version's" less-than-airplay-friendly "f**k that" lines.  I don't know that the acoustic rendering of the song was necessary, honestly, but the acoustic version of "Breathe" is pretty cool, giving Kendrick's (formerly of The Wreckage) vocals more of a chance to carry the work load here and allowing him to really expand the emotional dynamic on the song.

As to the rest of the album, there is plenty of fire and flash to go around, from the guitar-driven "Breakout", the angry, edgy, "Dead Inside", which showcases some impressive screaming from Kendrick, to the catchy "Where You Lie" and "Blood On My Hands".  If there is one weakness here, it is the fact that a lot of these songs have very similar tempos.  They don't sound alike, necessarily, but the tempo doesn't change much, making the songs kind of meld into one another.  Thankfully, "Breathe" and "Jar Of Hearts"...along with the two acoustic renderings...give a bit of separation on this deluxe edition that would have been otherwise missing on the original.

This is an overall very solid album, with McCain showing some nice flashes of solo work on the guitar, and Mussack providing possibly the best drum work to ever appear on a record that McCain has been a part of.  I was really impressed by his fill work, solid rhythms, and overall tight playing.  Saint is a really good rhythm player as well, and Kendrick has the vocal chops to cover all of the Emphatic territory, regardless of the vocalist, and also make this Through Fire material very much his own.

A really nice repackaging here (outside of the digipack part of things), and I'm sure fans are going to want to snap up the reissue as soon as they can get their hands on it.

Rating:  While not ground breaking, Breathe shows solid growth, is catchy and well-performed, earning itself a crankable 8.

Back To Reviews Index
Posted by arttieTHE1manparty at 9:03 PM