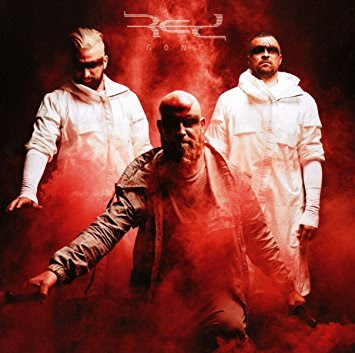 The band Red returned to the scene late in 2017 with their newest offering, Gone.  Now relocated to Nashville from their home in Pennsylvania, the Armstrong brothers, along with vocalist/keyboardist, Michael Barnes, largely continue in the same stylistic vein of symphonic, electronic alt rock/metal intermixed with elements of grunge/post-grunge that has garnered them several Dove Award (think Christian-only Grammys) nominations and awards, as well as multiple Billboard-charting albums, and nearly 1.5 million albums sold dating back to 2007.  Former member Joe Rickard also returns as a "studio musician" on drums, so the same band that has been releasing albums since 2009's excellent Innocence & Instinct, is back for one more...and perhaps final...go-round (more on that in a few minutes).

Returning to generally shorter, less-orchestral songs, which at times left 2015's generally great Of Beauty And Rage album feeling bloated in spots, Gone finds the band a bit more aggressive right from the outset, as the dirty, grungy rock of "Step Inside, The Violence" feels like the angry electronic-infused grunge rock that Filter made so popular with "Hey Man, Nice Shot".  Barnes is in fine, angry form vocally, and the guitars are crunchy and edgy as they swirl and churn throughout the track, bolstered by keyboards and electronic elements and Rickard's big drum sound.  "Still Alive", one of a couple of tracks that were pre-released as singles, follows things up nicely with an intense, uptempo rocker that really hearkens back to Innocence & Instinct, without sounding like something that was a left-over idea or cutting room floor track.  Probably my favorite track on the album, "Still Alive" contains just enough synth and electronics to keep the alt metal crowd happy, while also combining a huge amount of crunch from the guitars and the rhythm section.  Barnes vocals are as strong as ever here, easily soaring above the fray with piercing high wails and edgy screams alike to give life to lyrics that plead with desperation and angst.

The album's title track follows and things start to unravel for me, at least for a few songs.
"Gone", the song, adds a bit more of the atmospheric approach that the band has come to be known for, but they also mix in some odd...I guess you'd call it dub-step...looping after the chorus sections, and they start to lose me a bit.  Barnes still sounds great, but the guitars sound like they are on autopilot, with nothing overly interesting going on, and the keys and electronic elements kind of take over the track.  "Coming Apart" is the first true ballad on the album, but it is just so plodding and slow-moving that it really chokes some of the life out of the album at this point.  Barnes adds a breathy quality to his vocals that I'm not overly enamored of, and the synth and keys just don't have enough oomph to overcome the slow pace the track moves along at.

And then "Unstoppable" hits, and ironically, the album just about stops for me.  This song is just so repetitive, so poppy, so...un-Red...that I pretty much skip it whenever it comes on now.  The programmed drums do nothing for me, the guitars are basically non-existent,  and even the lyrics are juvenile and lacking in any kind of depth.  This really isn't a good song, and I started to grow concerned that the remainder of the album may be headed down this road.

Fortunately, "Fracture" finds the band in better territory musically, as does "Chasing Your Echo", both of which find the band hitting a bit harder in the chorus sections, while throttling back a bit in the verse parts, giving them both some nice diversity.  Electronic elements are present in both, but the guitars have more life, more urgency, and help to drive the songs forward.  Barnes breaks into full-blown screaming on "Chasing..." as well as the following track, "A.I.", which finds the band looking back a bit to the bigger, more symphonic style that was so prevalent on Of Beauty And Rage.  Easily my favorite of the slower moments on Gone, "A.I." is a nice bridge between styles.

The record closes with "Singularity", which is an okay song...not great, but not horrible...although I'm not a big fan of the spacey electronics used in a couple of spots, and I found myself growing increasingly anxious for Barnes to just absolutely cut loose.  Its a bit frustrating because I feel like the album really ended on a whimper when a bang was needed.

In the end, my basic complaints would be that the record comes off as rather disjointed.  At times it hits nice and hard and finds the band going back to what it did so well with its early success, changing things up now and again with some symphonic touches and some atmospheric moments. But then Gone gets all poppy in the middle, and honestly a bit boring for a stretch, which really reduces the album down to an EP of good material.  The production is, overall, really good, and the songwriting is still strong overall, with deep, thought-provoking (for the most part) lyrics that challenge both the Christian listener and the listener who just drops in for a solid dose of symphonic alt metal.  While not the pinnacle of the band's career, Gone is by no means a horrible album, with a couple of tracks here being among my favorite ever from the band; they just need to leave the poppy stuff for the poppy bands, and toss in another blazing rocker or two.  Hopefully, there is no truth to rumors that the band may soon be "gone" from the full-album scene, instead opting to release mostly digital singles and the like, because that will likely leave me "gone" from the Red fan base.

For newcomers to the band, I wouldn't recommend Gone as the starting point, rather steering people in the direction of the previously mentioned Innocence & Instinct, or the one I find myself returning to more than any other Red album, which would be End Of Silence, which features several of the band's better known songs, including not one but two Christian Rock Songs of the Year (for 2007 and 2009)...and a nominee for that same award in 2008!  That's some serious impact from a single record!  In fairness, I could imagine "Still Alive" from Gone garnering similar attention, which would be cool to see from a band working on its second decade of existence.

Rating:  Rock-worthy without question, give Gone a 6.5, but know that it could have been so much more.