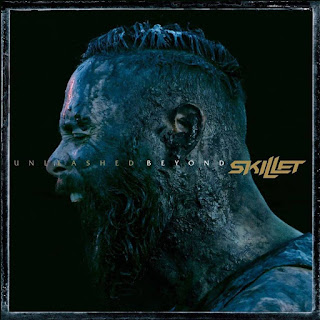 The undisputed kings (and queens) of Christian modern rock...and one of the most successful modern rock bands in America, period...Skillet have once again repackaged their most recent effort with new material and offered it up to fans, most likely to tide them over until the next album.  Originally released nearly two years ago, Unleashed has seen multiple songs hit radio as singles, from the huge, arena anthems "Feel Invincible" and "Back From The Dead", to a couple of slower, more ballad-esque moments with "Lions" and "Stars", and the original album closer, the crunchy, modern metallic screamer, "The Resistance".  Sandwiched in between are several other solid songs, whether it be the more symphonic "I Want To Live", the poppy "Saviors Of The World", the crunchy "Undefeated", or the breakneck-speed rocker "Out Of Hell".  Not everything on the album worked overly well for me, as I am not a fan of "Watching For Comets", per se, nor did "Burn It Down" really grab me, though neither is a bad song, necessarily.  The same could be said of "Famous", which is a little too electro-pop/dance rock for me, what with its looped drums, syths, and electronic noises, but again, it's not brutal or anything.  But, if I had wanted to cut the album down to the ten best tracks, "Comets" and "Burn It Down" would have been the two to go.

But rather than trim the album to ten tracks, Skillet went the other way and tacked eight bonus tracks, including five new songs, onto the deluxe edition of the album, giving us Unleashed Beyond.  A lot of people love this kind of thing, but I really, REALLY wish I wasn't forced to buy a new CD just to get the new tracks (sure, I could download them, but I'm a physical product guy).  There is enough material here between the five new songs and the multiple remixes that an EP could have been easily released and I wouldn't now have two versions of the same CD on my hands.  I know...First World problems...  Anyway...released near the end of 2017, the expanded album has already seen one song starting to climb the Christian rock charts, with the modern rock screamfest of "Breaking Free" charting seeing growing airplay in March of 2018.  Much like the album proper, the new songs are mostly really good-to-great, with only one minor miss, and then there are three remixes thrown in for good measure.

The first of the new songs is the previously mentioned "Breaking Free".  I called it a screamfest above, and there is really no other term I could think to apply as this is exactly what the song is.  Big pounding drums and hard, churning guitars abound on this catchy song, which is to be expected from the majority of Skillet's hardest-edged output over the past five albums.  But "Breaking Free" takes things to a new extreme when John's powerful roars and shouts are matched by scream queen, Lacey Sturm, the former lead singer of Flyleaf.  Mix in Jen Ledger's tame...dare I say "sweet" sounding by comparison?...backing vocals, and you have quite a track on your hands.  This would be my favorite of the new tracks were it not for the hyper-catchy "Set It Off", which feels to me like it could have/should have been included on the original version of Unleashed.  Heck, I prefer this track to more than half the songs on the original album, trailing only "The Resistance" and "Feel Invincible", and possibly "Lions" and "Undefeated".   A guitar-driven rocker with a chant-along chorus, "Set It Off" should definitely be released as a single and may be one of the few bonus tracks that I can think of that have the potential to actually top a chart.   Seriously, it is that dang good, and I hope it finds its way into the band's live set for the next tour.

Also really good, but a slight step below these two is the more straight-forward rocker, "You Get Me High", which features a more classic rock-styled guitar riff but retains the huge, arena-filling drum sound the band has really become known for.  I also really like more mainstream-sounding, "Brave", which reminds me a LOT of "Lions", but with a bigger, more anthemic chorus, and fuller, bigger-sounding drums.  Ledger sounds really good here, and I don't think she gets enough credit for what she brings to the band vocally, as well as on the kit.  Again, this could have/should have replaced "Watching For Comets" on the original album, in my opinion, and could very well be another chart-topping bonus track for Skillet, again coming out of the bonus tracks of a re-issued album.  An impressive feat, to be sure.

I'm not completely sure how I feel about the acoustic-based ballad of "Stay Til The Daylight", which has a definite "Stars" feel to it, but there's something that just seems off to me.  John is in full singing mode here, and the band incorporates some nice strings into the mix, but it isn't until the final run through the bridge/chorus section that the drums find their way into the track, which left me kind of hanging, to be honest.  More time may help me better figure out what it is that I don't like about this song...or give me more of an appreciation for what it is.

The band also incorporates three remixes here, with two of them being total wastes of disc space.  Seriously, the remixes of "Feel Invincible", and especially "The Resistance" are just abysmal.  Totally, unquestionably, 100% pure skip material for this guy.  Just...wow...just bad stuff.  As to the "film version" of "Stars", which was remixed for the movie The Shack, if memory serves, it's okay, but kind of redundant.  It features an incredibly long intro (my oldest son thought they made it into an instrumental), one of the choruses is removed, with two verses pretty much running into each other, and the whole affair feels fairly sappy and rather boring.  I like the original version, especially in the live setting, but I don't see any time when I am going to pull out this album just to hear this reworked version of the song.  Sorry Skillet, but I may actually rip and re-burn this CD without the closing three tracks, as I can't stand two of them and don't find any reason for the third.

The repackaged album also features an expanded insert which folds out into a poster of the sludge-covered band.  Full lyrics for all of the new songs are included (along with all the original songs' lyrics, also), along with updated credits and thank-yous.  The artwork is basically identical, with the updated and relocated title being the only change to the front cover, and the updated tracklisting being the lone change to the back.

At WinterJam 2018 a few weeks ago, John Cooper hinted that the band had some big news coming up, so perhaps a new album is in the offing.  Perhaps he was simply referring to "Breaking Free" being dropped to radio as a single, or maybe their WinterJam performances were being recorded for a live EP.  I'm not sure, so stay tuned to www.skillet.com and the band's social media outlets to stay up to date.  And if you haven't already done so, I would strongly encourage you to pick up Unleashed Beyond for the five new tracks, as most fans will find at least four of them strong additions to the band's catalog, and I have no doubts there will be fans of "Stay Til The Daylight", also.

Rating:  When you have a crankable album and add new, crankable material to it, you get more crankability, right?  The two BRUTAL remixes (and one pointless one) can't even really do much to drop the rating here, which I top out at 8.

Back To Reviews Index
Posted by arttieTHE1manparty at 9:13 PM