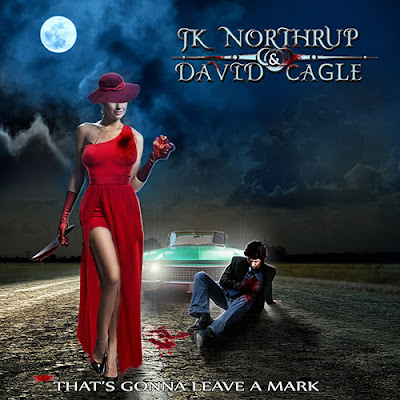 
JK Northrup is one insanely busy guy.  Besides mixing, mastering, and producing various projects for his Alien Productions company, the guy still manages to keep churning out amazing melodic hard rock projects seemingly every couple of months.  Case in point, it was just 3 or 4 months ago that the excellent Fiction Syxx was released.  Now, here we are again in early March of 2018 and Northrup is preparing to release another project, this time with the seriously underappreciated David Cagle on vocals, Larry Hart on bass, and Steve Brown on drums, along with a great collection of supporting talent.  That's Gonna Leave A Mark is set for release on MelodicRock Records later on this month, and I can already tell you it is going to be a must have.

If some of the the song titles on the record sound familiar, that is because most of this record was previously released in a limited, digital format under the Liberty N Justice name as The Vow, with JK doing a large portion of the writing, playing, and producing on that record.  However, the rest of the lineup for this record is new, with JK recruiting not only Cagle, but also Mick Brown's younger brother, Steve, for drums, as well as Larry Hart on Bass, and keyboardist extraordinaire, Eric Ragno, who jumps in to help on half of the album.

The album kicks off with the high energy rocker, "The Night Is Mine", and once he joins the fray, it is easily understood why Northrup is so high on Cagle as a vocalist.  A generally smooth tenor, Cagle has the ability to throw in just enough grit and edge to keep the sound from becoming flowery or saccharine here, which I feel is an important tone to set from the get-go.  JK rips off the first of numerous catchy, lively solos on this track with a style and sound that will definitely have listeners recalling his more hair metal days with King Kobra.  A solid start for That's Gonna Leave A Mark.

An introspective and lyrically melancholy song about love lost, "Gone" is up next, and for my money, its on melodic numbers such as this that the album really shines.  Ragno bolsters the sound of this mid-tempo number with his typically solid keyboard fills, and the rhythm section of Hart and Brown is absolutely lock-step here, melding perfectly with Northrup's rhythm guitars throughout the course of the tune.  The solo from Northrup perfectly fits the mood of the track, delivering both power and emotion, which Cagle matches perfectly, as he really finds his voice...and his vocal home...on "Gone" and similarly styled songs.  Good stuff, here.

"The Moment" is pure 80s bliss, sounding very much like a Warrant track, a la "Heaven", in places, mixed with hints of Slippery When Wet-era Bon Jovi and, to my ears, the more melodic moments from Damn Yankees, (think "Come Again" and "High Enough").  Not purely a power ballad, but definitely a lighter-inducing track that I could imagine filling the gymnasium during my late-80s prom years, "The Moment" is absolutely outstanding and, again, a place where Cagle's seemingly effortless approach really shines.

"Can't" re-ups the energy, heading back to mid-tempo rock territory.  The chorus is plenty catchy, and the layered backing vocals work well on this track that reminds me a lot of the style of music that Nelson has put out on their past couple of efforts...which is a good thing.  Northrup's solo is short and sweet...actually a bit too short for my tastes...and the rest of the band is in excellent form here on this track that, while not the best on the record, still offers up plenty to like.

"Sting Of Her Kiss" is a song that I remember really liking in its original LnJ form on The Vow, so I was a bit concerned about how this reworked version would come across.  I needn't have worried, as this snarky rocker delivers in much the same way as the original and is definitely one of my favorite uptempo numbers on the record.  The solo section here is longer than on the original, if memory serves me correctly, and JK absolutely tears up the frets on a run he drops just before the bridge that leads into the last chorus run.  Hart's presence is definitely felt on this track, as the bottom end is definitely more pronounced here than on a couple of other tracks, and the resultant groove is a fun one, to be sure.

The album head back to more mid-tempo melodic rock territory on "Another Goodbye", which really benefits from solid lyrics, excellent backing vocals, a nice hook, and the by-now-expected premium guitar solo from Northrup.  I often wonder if JK would have been one of the 80s "guitar gods" had he been in a band that gained more exposure or catered more to the hair metal crowd than King Kobra or the excellent, bluesier hard rock he played with Paul Shortino.  The guy is a beast on the axe and he has a definite flair for the melodic solo style that he so frequently employs on this album, as well as his recent releaes with Fiction Syxx and others.

Initially, "The Honeymoon Is Over" has an odd vibe to it, with programmed drums and some odd keyboard elements and vocal effects at the start, but these quickly give way to a decentmid-tempo melodic rocker, largely supported by some extra-smooth guitar riffs from Northrup.  The chorus is a bit simplistic lyrically, but Cagle manages to keep it from sinking.  Not my favorite track, by any means, but again, this collection of musicians seems capable of taking a song like this one and giving it life.

The title track brings things back into focus with some excellent kit work from Brown and a more 70s classic rock vibe than most of the tracks here.  I especially love the frenetic guitar work here, feeling like JK really just went in and free-styled this solo, just having fun with it and letting it go where the song and his mood dictated.  A top three or four moment for me on this album.

"For Sure Thing" is another fun, uptempo rocker, which features Baton Rouge's Kelly Keeling on backing vocals.  Another lyrically strong track, "For Sure Thing" is all about cruising with the top down and the speakers up, as far as I'm concerned, and is another example of the type of good-time rock n roll that simply isn't played enough today, at least by American bands.  Cagle rocks, plain and simple, and the entirety of the band has the feeling of a group of guys that are out to have some musical fun and take all the listeners with them.  Great stuff here!

"Siren" has a funky, "Brick House"-meets-Extreme kind of groove to it that is unlike anything else on the record.  Definitely a fun song, but one that I'm guessing many listeners are going to have to give a chance to so that it can properly grow on them.  Another quirky track lyrically, "Siren" is a tune that gives Cagle a chance to showcase his ability to handle something other than the standard melodic rock fare, and he passes the test with flying colors.  For what its worth, Northrup launches into an ultra-cool solo just before the final chorus...but you probably guessed that, right?

"Forever Starts Tonight" gets some backing assistance from Mr. Gunnar Nelson, and his presence is felt immediately as the song actually opens with a layered line from the chorus section before the guitars and drums come kicking in.  Once again right in the wheelhouse of Cagle, and Northrup digs into his bag of licks n tricks one more time on this rocker, and yet again the rhythm section of Hart and Brown deserves special mention on "Forever...", which is a really good song that I'm surprised to find this late in the record.

Album closer, "Chasing Ghosts" drops the tempo a bit, not quite into ballad territory, but close, and closes the record with another dose of smooth melodic rock that, again, really allows Cagle to shine.  I truly hope he and JK hook up again in the not-too-distant future, as they definitely have something working here.

Mine is a digital promo version, so I have no idea about the packaging of the album, but generally speaking, Melodic Rock Records is solid in this area, so I don't have any pre-conceived concerns in this department.  Additionally, I am told there is a Japanese bonus track that I don't have access to at this time, but I know that it is one that was on the LnJ version of the record, so I am anxious to get my hands...and ears...on that track whenever possible.

The production is solid, professional, and clean, with no glaring issues with mix, muddiness, or excessive polish.  Northrup has proven himself to be equally talented behind the mixing board as out in front of it, and the work here is no exception.  Initially I thought there was a bit of middle-to-bottom end missing in the mix of some of the tracks, but it turned out to be an issue with my EQ, which I had to adjust when listening to another review album that...ummm....let's just say "lacked in appreciable mixing and production skill"...and leave it at that.

Overall, That's Gonna Leave A Mark is very likely to leave a mark on listeners, as it is a really good, generally upbeat-but-always-real, lyrically fun album with a whole lot of musical talent shining through in various areas.  Nostalgic-yet fresh, comfortable-yet-not cliche, this effort from Northrup, Cagle, and Company is well worth picking up.

Rating:  Crankable, unquestionably, I give this an enthusiastic 8.