BROKEN TESTIMONY "Holding On To Nothing" 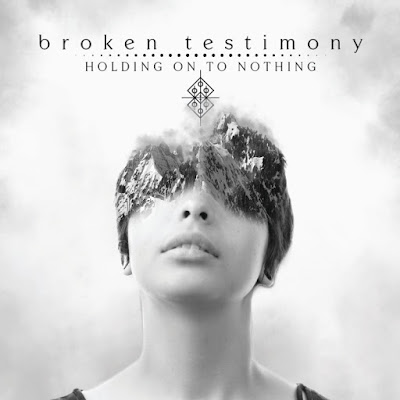 I am not going to lie.  When I first received this CD, took a look at the band name, the ummm...interesting...cover art, and the way the song titles were laid out, I thought I was going to be reviewing a death metal band, or at least some kind of brutal metalcore.  Despite these things, however, Broken Testimony is most definitely NOT death metal, or metalcore, utilizing a more post-grunge, alternative hard rock/modern hard rock sound than anything else.  Except, it really isn't that modern sounding, either.  Let me explain...

Broken Testimony is a four-piece out of South Carolina, who has been performing together for only a couple of years.  Despite the relative lack of time together, the guys managed to put together this debut album, which is performed almost 100% exclusively by the band, with only a single guest vocal earning outside credit, which is kind of unusual for such an inexperienced band.  Usually with new bands, there was some bigger band that discovered them and helped them out in the studio by dropping a few guitar solos or co-lead vocals or something.  Not the case here.

The album starts off with...and is broken up by, and ended by, a series of musical interludes.  The first, "We Never Learned From Our Mistakes" is probably the coolest of the four here, and it features a thunderstorm and alert sirens while some mellow guitar strumming goes on over the top.  "Control" kicks in shortly after this intro ends, and almost immediately it is obvious these guys were big fans of the modern rock scene of the mid-2000s, early 2010s, as thoughts of older bands like Staind, Breaking Benjamin, Crossfade, Chevelle, and a few others start to permeate my mind.  The guitar work, in particular, is very reminiscent of what you likely heard from these bands around 2008, 2009, 2010, with the combination of clean and harsh vocals also recalling that era of hard music.  The mix on the drums sounds off to me, as they are pretty flat sounding, but overall, "Control" isn't a bad song at all.

"One Day" is more melodic in its approach, really reminding me of some of my favorite stuff from Staind, although Page's vocals aren't as deep or as emotional as Aaron Lewis' vocals are...but, really, whose are?  Page misses a couple of notes here, whether for dramatic effect or not, I really can't say, but overall, this is one of the best songs on the album, and is really where I think the band finds their sweet spot, stylistically.  Delvaux delivers a decent solo, one that is befitting of the style of the song, and the bass line here is pretty cool, so "One Day" has a lot of what it needs to be a really strong song.  Once again, the drums just sound off, which is unfortunate, as they do detract a bit from the song, and I get the impression that Chism is a much better drummer than the mix represents here.  Just a hunch.

"Fade Away" continues in the Staind style, with a somber sounding guitar riff introing the track before the bass comes rumbling in over the top of some pretty powerful drum thunder.  Again, Page's vocal style is very reminiscent of the approach used by Lewis, but once again, he seems to miss a note or two, especially when he reaches back for a powerful vocal thrust, which seems to throw him off a bit.  The drums here are much better than on the previous few tracks, and again the band seems most comfortable in this style.  Once again, Delvaux offers up something of a solo, although, much like Staind, Chevelle, and their ilk, the solo really isn't the focal point of any song, so don't expect any Van Halen type of hammer-ons or string bending here.

We hit another interlude at track five, and this one comes off as a bit darker than the first.  There are some vocals to this one, sounding like they are lifted from a movie, but it is one I am not familiar with.  The "music" here is more just atmospheric noise behind the narration, and this track is just a wasted 1:50 to me.  Sorry...I'm not an intro/interlude/outro guy in general (you can find my complaints about these things all over this review site).

"Blessing" brings the music back to life with a really cool drum cadence and a funky bass line that is somewhat reminiscent of somthing Korn might have done several years ago.  The overall track doesn't sound this way, but the first minute or so is pretty cool.  From there, the verse sections are fairly laid back before the harsh vocals kick in on the pre-chorus sections, and then Page pours on the anger in the choruses themselves.  The thick, down-tuned guitars are pretty crunchy here, but I can't say that "Blessing" really does a lot for me, musically.  Lyrically, the song seems to be about killing someone, and is fairly dark and twisted, to be honest, especially when you consider the band is made up of teenagers and early twenty-somethings.  I mean, lyrics like "Plotting in disguise, With no haste, I could not wait..." combined with "No question, I had no doubt, Her skin felt so cold, As I gazed down into her eyes..." are kind of creepy, at least to me.  Maybe I'm reading too much into these words, who knows.

"Medusa" is up next, and is one of the angrier sounding songs on the record.  Page has an edge to his vocals throughout the song, and the lyrics scream of a friendship/relationship destroyed by deceit and lies.  The guitars churn angrily throughout the song, and the drums take on a tribal pattern that just feeds the angst here.  Easily the best of the hard-hitting tracks here, for my money, and a good type of song to make the far more melodic tracks like ""One Day" or "Fade Away" pop all that much more.

Too quickly we are disrupted by yet another interlude, this one called "We Smoke Them Away, Thinking They'll Burn Off".  Again, we have some ambient noise from the guitars in the background as a narrator reads through a passage by Alan Watts, one of those "deep Eastern thinkers" that my college philosophy professors probably still drool over to this day, but that really do nothing for me.  Go ahead and Google him and the words to this interlude and you will find him pretty easily.  Just wasted CD space, in my opinion, and I got an "A" in philosophy, but whatever...

The last two actual songs on the album are "Unknown" and "Vitality".  "Unknown" is a pretty stark, dark-sounding song from the outset, but lyrically seems to be rather hopeful, to be honest.  We find the band back in Staind mode for this one...and the drum mix issue has returned, also, sounding very flat.  A decent song, but not one that does anything to really set itself apart from the rest of the record.  "Vitality" ramps up the aggression slightly, still sounding a lot like Staind to me, but with more chugging guitar riffing going on and some harsher edges to Page's vocals.  I like the way the chorus is layered upon itself, and the track is one of the top three or four on the disc, to be sure.

Things close out with the outro, "But They Just Stain Who We Are Inside".  I found a notation online that says these interludes were taken from a poem that Chism wrote called "Cigarettes On School Buses", but I'm assuming that is where the track titles come from, and that Chism isn't trying to take credit for Watts' work.

Overall, the band sounds to me like they have quite a bit of talent and a definite passion for the style of music they play.  The issues are that the production, especially on the drum mix, comes off fairly flat on about half of the album, and this style of rock is not really one that is popular today.  Had this come out in that late 2000s/early 2010s timeframe I referenced earlier, I wouldn't be surprised to hear Broken Testimony in the Octane mix.  As it stands, even with updated production, and a bigger recording budget (which I suspect is the root cause of the mix and the off-sounding vocal spots, where only one or two takes were likely used), this would still not sound like anything you hear on satelite radio or modern/active rock stations.  Maybe that's not necessarily a bad thing, and you have to play what you love and what you sound like, right?  To me, Broken Testimony sounds like a band that really loves Staind, Breaking Benjamin, and some of the other bands I mentioned, and, as such, they have incorporated those styles into their own music.  And there's nothing wrong with that or with being true to yourself.  Just don't expect the world to come meet you at where you are if they have already moved past the place you are standing in.  That is especially true of music...

I found an acoustic set from the band on YouTube that gives you a pretty good idea of where they come from musically, as it is VERY reminiscent of the unplugged show Staind did, musically.  If you want, you can check it out below.

The packaging is solid, with lyrics to all the songs included in the multi-fold digipack.  There is a black and white band photo under the clear tray, along with a thank you section and credits.

Rating:  For what it is, Broken Testimony's "Holding On To Nothing" is rockable.  I give this debut effort a 5.5.