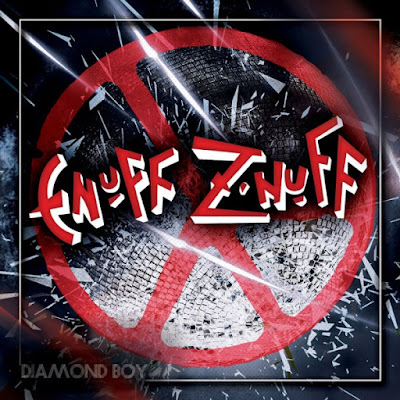 We all do it.  We all try to take a good thing and make it last as long as we possibly can.  Whether its an athlete trying to squeeze another season out of their aging body, a guy trying to get another washing out of that favorite t-shirt that is so threadbare you can count chest hairs through it, or a kid trying to get just a couple more hours in the pool before applying more sunblock.  If something is good, why not keep it going, right?  Bands are composed of people, and as such, are subject to human nature as well.  And, because of this, some bands....MANY bands...try to hang on too long and end up doing more harm than good to their legacy.  To me, Enuff Z'Nuff is one of those bands.

The band's first two albums are excellent collections of power pop/glam rock and are both must-haves for anyone who is a fan of that scene from the late 80s/early 90s.  But, for my money, Enuff Z'Nuff has released only one really good album since their best effort, Strength, and that would be their third record, Animals With Human Intelligence.  2010's release, Dissonance is an outlier in the band's career, as it is actually a surprisingly good record, even if it doesn't quite reach the greatness level that those first couple of records do.  But in between, there have been a lot of 50/50 albums, and a couple of real bombs, and the vast majority of the material without Donnie Vie at the microphone has left me rather disappointed.  Unfortunately, Diamond Boy does much the same as most of those other albums.

When you are a band who has now released 14 studio albums (not counting their quirky, but decent covers album, Covered In Gold) it is not a good thing when you can really only count the number of really good-to-great albums on one hand, but that is where Enuff Z'Nuff falls for me.  Unfortunately Diamond Boy doesn't move the band onto hand two.  There are a few songs here that are worth considering for the live set, most notably the uptempo, poppy, "We're All The Same", the trippy, psychedelic "Where Did You Go", which really has that classic EzN sound and feel, and probably the hardest-rocking track on the album, "Faith, Hope & Luv", which I find myself really liking, especially with its great, gritty guitar solo and killer groove.  "Fire & Ice" is pretty good, too, and has a definite Beatles-esque quality to it, especially with the nicely layered vocals, and the bluesy, groove-heavy "Metalheart" (don't let the title fool you...it ain't metal), is good...not great...but good and worth a listen.

But on an album that is 11 tracks long, you need more than 4 pretty good songs...and one really good one...to carry it.  Obviously the intro "Transcendence" is a throw-away track, and the title track is absolutely stupid, lyrically, and I can't bring myself to listen to it, especially with the overly processed vocals used by Chip.  Yeah, it sounds like the band is trying to channel its inner Cheap Trick, but it fails.  "Down On Luck" is just so ploddingly slow that I find myself almost lulled to sleep.  The same can be said of the tired-sounding shuffle of "Love Is On The Line", which references falling asleep a couple of times in the first verse, which just seems to be a tease, if you ask me.  "Dopesick" has a little more oomph...a little...but its just as boring as the others mentioned here, and the album's closer, "Imaginary Man", makes little to no effort to pick up the pace or mood of the record.

It's not that Diamond Boy is horrible; in fact it has a few pretty good spots, as I mentioned above.  But overall, the album is too slow and bogs down all the time.  I mean, its not a good sign when a mid-tempo number is considered fast compared to most of the songs on an album, and of the two uptempo songs here, one of them is just stupid (the title track).  If there were a couple more nice rockers like "Faith, Hope & Luv" in place of a couple of the multiple 60s lullabies on the record, Enuff Z'Nuff might have something to work with.  Alas, there aren't and the band doesn't.  Additionally, Chip Z'Nuff is simply not Donnie Vie on the microphone, and all the processing and filtering in the world won't change that fact.  I also think Vie's writing contributions are seriously missed throughout most of this record.  Diamond Boy is an okay record, but again, it does nothing to advance the band, in my mind, and really gives the impression of a band just playing off of the name and recording so they have something to sell at shows.

Maybe its time to stop trying to stretch out this good thing, Enuff Z'Nuff...

Rating:  A decent EP is not a great album, but that is what Diamond Boy is, at best...a decent EP with a lot of subpar stuff surrounding it.  Rock this at a 5.

Posted by arttieTHE1manparty at 8:49 PM