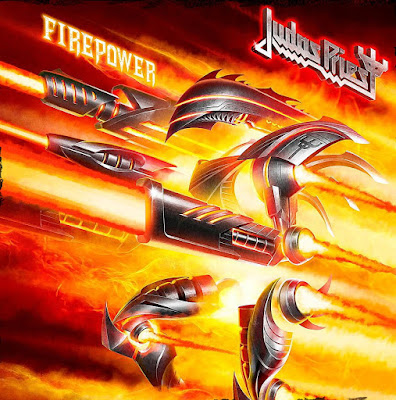 Judas Priest and I have two things in common.  We are both 48 years old...and we both still have metal in our veins!  Lest anyone think that the years have robbed Judas Priest of anything, they come roaring back with their 18th studio album, Firepower.  Yes, I know that Judas Priest has released three other albums since Rob Halford's return, and while all three had their moments, not Angel Of Redemption, not Nostradamus, and not Redeemer Of Souls have had the full complement of crushing drums, rumbling bass, screaming twin guitars, and...that voice!  Yes, they had elements of legendary Judas Priest, and yes they each had some great Judas Priest songs.  But for me, you have to go back to 1990's metallic must-have, Painkiller, to find such a perfect mix of speed, power, intensity, and musicianship as is found on Firepower.  This...is...Judas Priest, my friends!  This is EXCELLENCE!

Rather than break down the album by songs, I chose to break it down by individual performances, largely because there are are absolutely ZERO songs here that I don't either really like or absolutely love, much like I felt about Painkiller.  I don't even dislike the instrumental, "Guardians", which says quite a bit.  So, if you are going to talk about Judas Priest, the most obvious place to start is with the Metal God, himself, Rob Halford.

I think it would be fair to say that Halford has not sounded this powerful or this on-point since his first Halford album, Resurrection, which is the best Judas Priest album the band never made, in my estimation, or possibly Crucible, the 2002 follow-up, which suffers in comparison to Resurrection in the songwriting department.  Again, yes, Halford had some great vocals on the last few Priest records, but not since those two solo albums has Halford really unleashed the metal demon that fuels him.  Combining his absolutely precise enunciation with his expert range control, Halford absolutely punishes the microphone on this album.  I have read a few interviews with him where he states that he hasn't had to do this much studio work, perhaps EVER, but all that hard work clearly pays off here.  And while he doesn't unleash shrieking metal hell as often as he used to, it is still definitely in him to do so.  From the way he lays into the chorus of "Evil Never Sleeps",  or the sonic blast found on "Flamethrower", Halford fully earns his legendary nickname and reaffirms his seat upon the throne as the king of metal voices.  And it's not just the screams, either.  The emotion he packs into his performances here is about as good as he has ever put on record.  No, he doesn't shatter glass as often as he once did, but the ominously powerful vocals he applies to songs like "Children Of The Sun", the album's huge, sweeping ballads, "Sea Of Red" and my personal favorite, "Rising From Ruins", or the creepily sneering "Spectre", should serve to remind the doubters that few can so fully master their range and delivery as this living legend.

Jumping to the bass work of Ian Hill, it is amazing to me how much his instrument continues to drive the train after all these years.  Always consistent, always pulsing through the veins of each of the band's previous album, Hill sounds refreshed here, his bass more energetic than on albums past.  Perhaps that is due in large part to the meatier, crunchier songwriting that is employed on this record, with shorter, punchier songs for the most part, as only three songs here stretch out to beyond the five minute mark.  As the lone remaining founder of this legendary band, one could excuse Hill for phoning it in if he so chose, but that is not the case here, as his presence is felt all over this record.

Hill's rhythm section partner, Scott Travis, returns to the kit for his seventh album with the band.  The playing from Travis has, like Hill, always been steady, but has never really jumped out at me.  And while he doesn't rip into any thundering solos or blast through some bizarre sort of drum fill, his presence is definitely noted here, especially with his cymbal crashes and big kick drum sound.  Perhaps it is due to the extra bursts of speed on this album, which were frequently lacking on the previous couple of records, that really draw the drums out, as you can't help but appreciate the skill required to play at such a pace and keep perfect rhythm.  At least that's the case with me.

The real question for a lot of people was whether or not the guitar tandem of Glenn Tipton and Richie Faulkner would manage to step up and bring out a sense of power and melody not really heard from the band since Painkiller, in my estimation.  A lot of people point to the 2011 retirement of K.K. Downing as the moment when the Judas Priest guitar stylings really changed.  I get that to a point, as Downing is a legend in his own right.  However, I don't think the band has really had that big, full, metallic Judas Priest sound to their guitars since Painkiller, especially with the change in tuning and approach found on the Ripper-fronted albums, Jugulator and Demolition, both of which found the band abandoning their classic metal sound for thrashier, and at times, more nu-metal guitar parts and song structures.  That can't be blamed on Faulkner, as he was not even around at that time.  The same can be said of the last three Halford-fronted releases, which I felt got a bit long-winded, drawn out, and plodding in places, with the guitars frequently sounding bogged down.  That is not the case here, not at all.  Despite the implications by Downing that co-producer Andy Sneap may have contributed to the guitars on the record (he reportedly claimed Sneap, not Downing, actually played on the album), there can be no denying that this is the sound most closely associated with Judas Priest, combining classic metal elements of British Steel, Defenders of the Faith, and Screaming For Vengeance with the all-out metal assault that was Painkiller.  Containing some of the fastest, crispest playing ever put down by the band, Firepower is a metal guitar album for the ages, in my opinion, and simply must be heard.  Heck, the riff in "Traitor's Gate", alone, is worth slapping down some cash to hear, I believe, not to mention the riff-fests found in "Lightning Strike", "Necromancer", and the title track, among others.

The production here is excellent, with co-producers Sneap and Tom Allom, along with mixer Mike Exeter, really bringing the band to life on this record.  Again, as I mentioned earlier, the production team used multiple takes to get the best of each performer.  Allom, of course, was at the helm for several of Priest's biggest albums back in the day (interestingly, not Painkiller, however), and his return seems to indicate to me that the band knew something wasn't working quite right on the last few records.  That problem has been remedied with this production team.

So, is this the best Judas Priest record of all time?  Obviously, people are going to have varying opinions, but since you are reading this, you must want mine.  In my mind, it is definitely the best thing the band has put out in nearly 30 years, but it doesn't quite top the absolute metallic greatness of Painkiller.  It's close, no doubt, but it isn't quite there.  Classic metal fans are likely to point to British Steel or Stained Class as the band's most epic moment, and cases can be effectively made for Hell Bent For Leather or Screaming For Vengeance.  For my money, all of these would be in the top 1/3 of the band's releases, with Defenders Of The Faith just missing that list.  So, if forced to rank them, I would slot them like this...

Not a perfect record, which would be extremely difficult on an album that is 14 tracks long, but it is the best true "metal" album I have heard this year, and one of the best of the last 3 or 5 years.  If you haven't already snagged this album, I have no idea why, as this review is actually a couple of months late in coming.  Go get it.  Now.

Rating:  Supremely crankable, Judas Priest is back; long live the Priest!  Crank this to 9!

Back To Reviews Index
Posted by arttieTHE1manparty at 7:38 PM