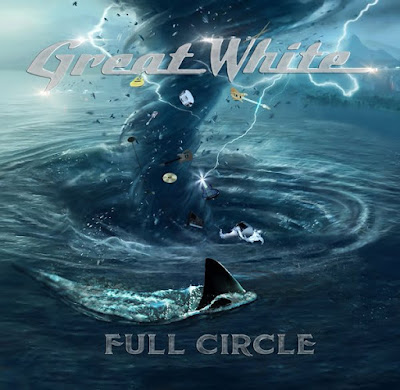 As anyone who reads this site with any regularity will likely know, I am a massive Great White fan.  In fact, if I am asked "who's your favorite band, Arttie?", I will automatically answer Great White.  I have been hooked on the band since I was first introduced to them with Shot In The Dark, and I have stuck with them through thick and thin.  But, I also do not hesitate to make it known that I am less than enamored with the split/two-band thing, and I am very unhappy with the way Jack Russell has been basically treated as a second-class citizen by the band that he co-founded.  Regardless, I have continued to buy the music that Mark Kendall's version of the band has put out, while also picking up Jack Russell's Great White's release, and catching that version of the band live whenever I have the opportunity.  So, when Great White, sans Jack Russell, released Full Circle in mid-to-late 2017, I ordered it to keep the collection intact, if nothing else.  Plus, I'll admit, the title of the album had me hopeful that perhaps the band had finally come around to truly grasping who they once were and releasing an album worthy of the Great White name, regardless of the singer.

I have played Full Circle through in one sitting maybe three times since I got it.  Total.  I'll pop it in from time to time with the intention of playing it all the way through, but it is just about impossible for me to do.  Now, it's not because Full Circle is a terrible record.  In fact, it is considerably better than the sleeping pill that is this version of the band's last record, 2012's horribly titled Elation.  No, the problem is, no matter what some reviewers will tell you, this simply does not sound like a Great White record.  There are hints at this being a Great White record, with a lot of that likely due to the fact that Michael Wagener was brought on board to produce the record, which definitely helped the band to achieve a fuller, richer sound than what they had when they recorded Elation for Frontiers Records.  And yes, there are elements of the blues-infused hard rock that Great White did so well back in the day.  But in so many ways, this version of Great White sounds like they have either run out of ideas, or simply don't remember what Great White used to sound like.

I'll give you two examples, featuring two of the better songs on the record.  The first example is the band running out of ideas.  The song, "Big Time" sounds like it could be a classic Great White song, sure.  Wanna know why?  Because the band pretty much rips off one of their own songs!  The opening to "Big Time" and the opening to "Face The Day" from Shot In The Dark feature almost exactly the same guitar riff with practically the same simple drum line running beneath it (although "Big Time" does add in some kick drum).  Seriously, the first time I played "Big Time", I thought it WAS a re-recording of "Face The Day" until the lyrics hit.  Is this what the band has to do to sound like themselves?  They have to borrow old ideas and cut-and-paste them into songs with different choruses?  No thank you.

Example number two, this time with the band not remembering what it used to sound like.  Remember when the full band released that excellent tribute to Led Zeppelin?  It's been repackaged a handful of times, but it is frequently referred to as Great Zeppelin.  Ring a bell?  Well, if not, just put track three, "This Is The Life" on, because you will be treated to a rollicking mid-tempo rocker that reeks...REEKS...of Led Zeppelin, including Ilous' wail on the pre-chorus section...but sounds nothing like Great White.  On that record, Great White was trying to sound like Led Zeppelin; it was a tribute record.  But here, the band is just ripping off Zep riffs and yowls (albeit with a less impressive rhythm section) and calling it their own.  And yeah, yeah, I know...Greta Van Fleet and Inglorious and their ilk are making a living off of doing just this same thing, but come on...this is a classic hard rock band that has sold millions of records!  They shouldn't need to play to the current trends in an effort to stay quasi-relevant in today's music scene.

Aside from these two tracks, yes, there are some decent songs.  Album opener, "I'm Alright" is a pretty decent rock number with a really good solo from Kendall.  "Let Me In" is a great blues-rock number, with a soulful solo from Kendall, but you are lying to yourself if you are a Great White fan and you don't say to yourself, "man, Jack woulda KILLED on this song!"  And, it's not that Terry sounds bad...although I'm not a fan of his raspy vocal approach to chunks of this song...it's just that Jack would sound so much better!  The same can definitely be said of the bump-and-grind closer, "Never Let You Down", which finds Terry trying his darndest to imitate Jack's bluesy swagger, but falling hopelessly short.

Outside of these five tracks, the rest of Full Circle fails to do much for me.  "Moonshine" has it's moments, I guess, but when a horn section is introduced, I pretty much lose interest, as it just sounds forced to me.  And I think I could have liked "Cry Of A Nation" were it not for the rather boring chorus section that totally betrays a cool bass groove and a really smooth solo from Kendall.

You can call me opinionated, biased, jaded, whatever, but to me this is simply not a Great White record.  To me, it is more of a Mark Kendall solo record than a Great White record.  And maybe that is the direction Kendall should be going.  Maybe he should call his version of the band Mark Kendall's Great White, so people aren't confused into thinking that they are going to sound all that much like Great White.  At least when Jack's version put out their album, they were pretty up front in letting people know they were going to experiment with some different styles and elements.

Look, when you call your album Full Circle, and reviewers are going out of their minds telling you this album would have gone multi-platinum had it come out 30 years ago, fans of a band are going to expect, well, that you have come full circle and have embraced who you were and what you did.  But with Full Circle, Great White seems to have done nothing more than to tread water, neither fully embracing who they were or really attempting to move forward.

Rating:  Disappointing as a Great White record, but at least it's better than Elation.  Rock this at 5.5.

Back To Reviews Index
Posted by arttieTHE1manparty at 5:27 PM