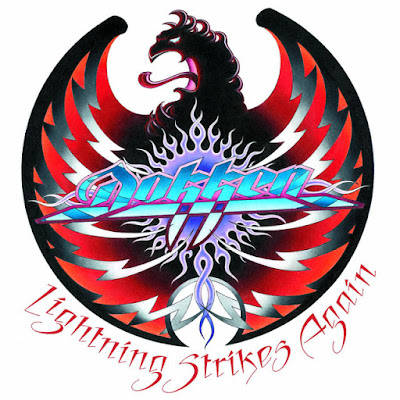 I am going to make a statement right off the bat that is going to immediately have some readers clicking to another page instantly, but I feel it needs to be said. So...here goes...

Jon Levin is a better guitar player in Dokken than George Lynch has been for nearly twenty years, and performs better on this album than Lynch has on any Dokken record since Back For The Attack.  (Okay, if you are looking to exit right now, here you go...  Return To Reviews Index)

Want another one?  Okay...Lightning Strikes Again stands as the 4th best album the band ever made, and nearly makes the Top 3, even though it came out more than two decades after the band's hey day.
(Need it again?  Return To Reviews Index)

Seriously, I stand by both of those statements, and firmly believe that if Levin had come on board with Dokken when things started falling apart between Dokken and Lynch after BftA, the band may have maintained a higher profile through the lean grunge/alternative era.  I'm not saying they would have been in Bon Jovi or Def Leppard's region in term of managing to hold their fan base...and at least a portion of their album sales...but they likely could have hung with Firehouse, who was still charting in the US, and remained huge in Asia and South America.  This album is that damn good, and Levin is that damn talented.  In fact, I think Levin plays Lynch better than Lynch does now.  Don't believe me?  Go find a video of some live material from the band on this tour, the Hell To Pay tour from 2004, or the Broken Bones tour from 2012.  On each of those tours, Levin is the guitar player and he slays it!  In fact, a lot of people don't realize that Levin was actually brought in to record with Dokken in 1989(!), and did cut a song that was supposed to go on Erase The Slate, but didn't surface until it came out as a Japanese bonus track on Long Way Home (the song is called "Dancin' (The Irish Song)").  But, Levin was still working with Doro Pesch at the time, and Reb Beach joined Dokken for Erase The Slate, so the timing was just wrong.  But, I still wonder what might have happened....

As it is, Lightning Strikes Again is the best album the band released post-Lynch, at least up to this time, although there are others that are solid or that have some really good tracks.  But Lightning... seems to capture the essence of what the band once was, with strong, exciting rockers and a couple of lighter-in-the-air ballads.  At 12 songs, it is two songs too long for me, but hey, I'll take two filler cuts (the modern-sounding "Disease", which feels out of place, and the pure sugar-water ballad, "How I Miss Your Smile") over the garbage that a lot of retro bands are recording as their strong songs!

Don's voice has lost some range, there is no question, but I personally like the rasp that is added to his vocals in numerous places here, and he is capable of belting out a pretty good wail in spots that require it.  Long-time drummer, "Wild" Mick Brown (more on him in a moment) is still on board, adeptly handling the kit and supplying some strong backing vocals as well.  It would be nice to have Jeff Pilson's excellent harmony vocals here, but his gig in Foreigner is likely far too lucrative for him to take on the risk of losing that slot on a tour just to do another Dokken record.  Musically, however, Barry Sparks fills in more than capably on bass.  But it is Levin who owns this record, whether he is ripping through monstrous solos or filling with riffs and rhythm guitar work.  There are times it is challenging to tell the difference between his playing on this record and the stuff that Lynch was doing on the first four records, but it never sounds like he is copying anything George did as much as he is simply employing the classic Dokken tone.

Standouts here include the first three tracks, with "Standing In The Fire" being one of the best tracks the band has recorded in I don't know how long.  The song sounds like it could have been written back in the Under Lock And Key or Back For The Attack sessions, and has everything going for it that was classic Dokken:  powerful, melodic (if a tad raspy) vocals from Don, a huge drum sound, a big, catchy chorus, and blazing guitars from Levin.  I'm not sure if Brown is doing the harmony vocals, or Don laid down an extra couple of tracks, also, but the harmonies here are very strong, which is a great thing to hear.  "Give Me A Reason" follows suit, sounding like it could slip right onto Under Lock And Key, maybe following "Jaded Heart" or "Don't Lie To Me", with Don's rougher (but still strong) vocals being the only thing that I think would tip people off that this song was of a different era.  "Heart To Stone" is a bit more mid-tempo, but still retains that classic Dokken melodic rock sound, again very much in line with their early material.  Album closer, "This Fire" hits hard as well, with some more blistering fretwork from Levin to leave you with a smile, just in case Don's little, humorous complaint about his pizza doesn't do that for you (it's a hidden tag at the end of "This Fire").  Another classic Dokken-styled track would be one of my personal favorites, "Judgement Day", which is just a great piece of hard rock music all the way around.  The same can be said for "Point Of No Return", which may be the best track on the record, with its rapid fire drums, screaming guitars, and an angrier sounding Don really delivering on this scorching rocker.  As far as the slower material, "My Oasis" is definitely the stand-out for me, but "I Remember" is a solid ballad, also, but neither come close to the greatness of "Alone Again" or the majorly underrated, "Will The Sun Rise" from Under Lock And Key.  I already mentioned not liking "How I Miss Your Smile" a great deal, and I really wish it hadn't been back-to-backed with "My Oasis", as it slows things down for just a bit too long for me.

The packaging is excellent here, with a 16 page, full-color booklet, with band photos, full lyrics, writing credits, etc.  Don produced the record, which may have helped it to get that classic feel, and I have to say it is done really well.  There was also a little flyer included in the packaging that Rhino put in to allow the purchaser to download some Dokken ringtones. Not sure if that still works, but I still have the little insert, so maybe I'll check it out later.

In closing, I want to take a moment to make an observation.  Despite everything that everyone seems to want to think about Don Dokken, I have to say he must be one of the most forgiving people on Earth, as he has welcomed George back on multiple occasions, no matter how much crap the guy has talked about him.  Lynch has even been on record stating he tried to tank the band when he came back and the band put out the ABYSMAL Shadowlife record!  But Don keeps forgiving him on some level, and I don't know why.  If you read interviews or watch interview segments, Don always has good things to say about George, while Lynch is usually a complete asshat about Don.  The same has to be said about Don and Mick Brown, whom I mentioned I would get to at a later point.  Now is that later point.  Mick Brown has also been recorded in interviews saying some pretty bad things about Don, yet Don continues to keep the guy employed.  In fact, Brown is the only other member of Dokken to appear on every record, except Don  So, I guess I would have to say that Brown is a pretty lucky guy to have Don be so forgiving of the garbage that Mick has thrown out there.  Add in the fact that both Brown and Lynch joined Pilson in forming their own Don-less version of Dokken (read my review of T&N's Slave To The Empire here) with an album that was rumored to at one time be named Dump The Chump, with Don being the obvious target.  I guess my point is, very few of us could treat our employers the way Brown has treated Dokken and still have a job.  And it's not like Don couldn't just do another solo record with Levin, Sparks, and just about any other drummer, and still sound really, really good; he's proven he can with his excellent solo record from 1990.

I highly doubt we ever get classic-lineup Dokken back together...for real...especially with Pilson's position in Foreigner, and Lynch being satisfied with his 200 other projects (and the fact that he just comes off like a bitter tool most of the time...), but this fine slice of melodic metal/hard rock is dang close to the best the band ever recorded with that classic line-up.  Again, I rank it in the band's Top Four, slotting in just behind Tooth & Nail, which I put at number 3.  But there are days, when the mood is right, that I could even bump this album past that one, at least momentarily.  It really is that good.

Rating:  Crank this one to 8.5, and if you have never heard it, be prepared for a trip back to a better time of Rockin' with Dokken!

Return To Reviews Index (if you made it this far!)
Posted by arttieTHE1manparty at 7:05 PM