QUIET RIOT "One Night In Milan" 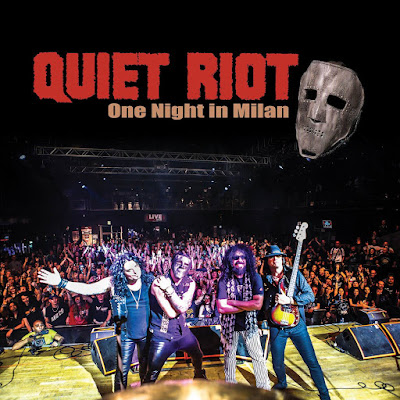 One Night In Milan, the new live album from Quiet Riot, is the latest in the live series that Frontiers Records has been releasing.  Featuring a classic hard rock/metal act from the 80s, several of these releases have seen the light of day over the past few years, ranging from the excellent (Mr. Big) to the really good (LA Guns and Tyketto) to the pretty good (Dokken and Steelheart) to the decent (Treat).  Yes, other bands have put out live records recently on Frontiers (Asia and Graham Bonnett/Alcatrazz come to mind), but these were not recorded as part of the Milan series.  So where does Quiet Riot stack up with the rest of these recent live efforts?

First off, I have to admit I have a hard time calling this band Quiet Riot now.  Sure, Frankie Banali owns the name and is an original, and yes, I know Chuck Wright has been in and out of the band since the Metal Health days.  But, I honestly can't consider this current line-up anything more than a tribute band with Durbin out front, and even the talents of Grossi on guitars can't really do much to change my mind.

So, you might be saying, "Okay, Arttie, but is it any good?"  Well, that depends.  I didn't really mind Durbin's vocals on the last studio effort from the band (2017's Road Rage), and I actually kind of liked that record, even though it kind of struggled with an identity crisis, in my opinion.  I thought the guy put forth a strong effort and avoided the trap of trying to sound like the late Kevin DuBrow.  But, I have to say that Durbin's performance here is an unbalanced one.  At times he is great, while at other times he comes across as, well, yowly is really the only word I can think of to cover it.  He yowls.  A lot.  Especially early in the record.  Maybe it was adrenaline, I don't know.  I do know it gets annoying.  He's also off-tune in several spots early, with some of the most notable instances occurring in the band's most well-known songs, such as "Slick Black Cadillac" and Condition Critical".  To be fair, he does sound pretty good on "Wild & The Young" (although I think the band sounds somewhat sloppy here...and the backing vocals are just not there at all) and he's right on with "Mama Weer All Crazee Now"...except when he tries to be-bop along with Grossi's guitars.  A couple of other tracks show that he could be a really effective vocalist for this band, especially on the lesser-known tracks, such as "Whatever It Takes" and "Terrified", where only the hardest of hardcore fans likely know how DuBrow sounded on those songs.  He also does a really good job on "Love's A Bitch", which I was rather surprised by, to be honest...although for most of the songs it sounds like he forgets the "ch" and is just singing "love's a bit".  And, if I want to get REALLY nit-picky, it drives me NUTS when he says "this is from our record, such-and-such", when he wasn't even BORN when a couple of these records were made, and he only sang on ONE album.  I get it, he's part of the band, but the phrasing...it just bugs me.

The crowd doesn't sound particularly into the show, to be honest, regardless of how much Durbin tries to engage them, which he does quite frequently (and he does do a good job of trying to stir up the fans in attendance).  Of course, I don't really know how much the audience was mic'ed up here, but it sounds pretty bad when Durbin tries to get the song to sing along to chorus sections of big songs, like "Mama Weer All Crazee Now" and it sounds like a bar crowd rather than an arena crowd.

The set list is solid, as the band predictably sticks to the most tried-and-true songs here, with only "Freak Flag" and "Can't Get Enough" showing up from Road Rage (tracks 10 and 11), with seven songs being culled from the multi-platinum breakthrough, Metal Health (1, 2, 6, 8, 13, 14, 15), three from 84's Condition Critical (3, 7, 9), and a single song each from QRIII (12), Terrified (5), and Down To The Bone (4).  Wisely, but somewhat unfortunately, the band totally steers clear of material from the Paul Shortino-fronted Quiet Riot, and also ignores later studio efforts Alive And Well, Guilty Pleasures, and the released-the-shelved 10 album, all of which are understandable.

While it is a live record, there are still several songs here which stand out for me as being pretty well done.  The previously mentioned "Love's A Bitch" is a good example, but, again, it is really frustrating/annoying when Durbin tries to get the crowd to sing along and its just crickets, man.  The bass work from Wright is great here, and Grossi rips through a killer solo, though, so the track is pretty solid, overall.  It's also pretty cool to hear "Thunderbird" played live...incorporating a piano...which Banali tells the crowd has never been done before, and Durbin may be at his best here, to be honest.  (On the downside, there is a two minute long history lesson from Banali as he intros the song "Thunderbird", which, of course, was a tribute from Kevin DuBrow to Randy Rhoads.  He also has the crowd take a moment of silence for Rhoads and DuBrow, before kicking off the song, which sadly isn't too hard to do.)

Of the two new songs, "Freak Flag" is the strongest of the two, which is also how I felt when I heard them on the Road Rage album.  The backing vocals here...well, they suck...but there is an energy to the song that the crowd seemed to respond to.  "Can't Get Enough" may actually sound better live than it did on the record...well, except the terrible backing vocals...but I still contend it doesn't sound like a Quiet Riot song.  While I totally understand why they were included, if I had been in charge of the band, I would have dropped "Can't Get Enough", if not both, and added in something like "Sign Of The Times" from Condition Critical, or maybe "Rise Or Fall" or "Twilight Hotel" from QRIII, as I think both would have fit nicely.

The band, as would be expected, nails their two biggest hits to close the record, but man, that lack of backing vocals is just so painfully noticeable that I actually wish they would use backing tracks, even if its just layers of the same guys in the band, because these sections are really distracting.  For his part, Durbin sounds more and more like DuBrow, and more and more comfortable, as the record goes on, and I wonder if it is because as his vocals get more fatigued they get a bit raspier and edgier.  Album closer, referred to as "Bang Your Head" rather than as "Metal Health", has a long, bluesy intro, which is pretty cool, honestly, and is one spot where the crowd's attention is obviously grabbed.  While it takes nearly a minute and a half for the song to actually kick in, it's an interesting 80+ seconds.  By this point, it is particularly apparent Durbin's vocals are starting to really tire, and I honestly wondered if he would be able to get through the song the way he sounds on the first few words of the first verse.  He recovers and ends up sounding really good for the majority of this song.

Production-wise, the drums are mixed way too hot in places, particularly the kick drums, which is to be at least somewhat expected given the reputed ego of Mr. Banali.  (Full disclosure, I've never met the guy, and he could be a great dude, which is why I said "reputed ego").  There are also some VERY obvious edits made on this record that were not so noticeable on the previous live records Frontiers put out from this series.  I'm not talking about altered set lists between the CD and DVD, I'm talking about blatant issues with edits being made where the crowd sounds flat out don't match up.  It's sloppy and not something I would expect from a label such as Frontiers, who normally does a really good job with stuff such as this.  I have noticed that a lot of these issues occur as Durbin is introducing songs to the audience, so I wonder if they cut out portions of his stage raps.  I wish Grossi's guitar was a little higher in the mix, especially his rhythm lines which get buried by the drums and bass at times, but generally his solos are pretty easy to make out, overall.

Overall, the band sounds pretty good, if a bit sloppy in places, but something has to be done about those backing vocals, which are just atrocious.  Durbin, as I stated before, is up and down, but he gets better as time goes on.  As a whole, I think One Night In Milan is a decent, if unbalanced live record, at least in terms of overall performance.  There are only a handful of instances where I felt the singer and the band were both on at the same time, but when they were, they sounded close enough to the real thing that I think Kevin DuBrow was smiling somewhere.

Not as good as the 2003 live record, Live In The 21st Century (seek it out, it's worth it!), but not a horrible listen, either.  My feelings about the use of the Quiet Riot name aside, I think this is, overall, a decent representation of where the band is now, and if it leads somebody to become a fan of the band and to seek out the back catalog, I guess it has served it's purpose.

Rating:  Rock-worthy, I give One Night In Milan a 6.

Back To Reviews Index
Posted by arttieTHE1manparty at 4:39 PM