FEAR NOT "For The Wounded Heart" 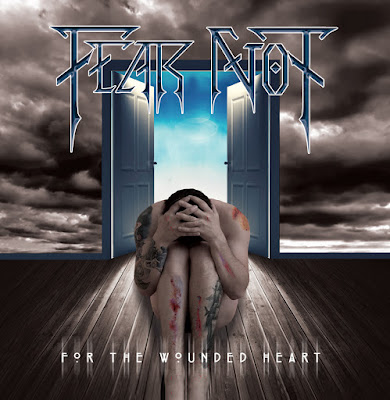 Perhaps the band should be called Believe It Or Not, because that is honestly how I felt when I heard that Christian hard rockers, Fear Not, were returning after 25 years.  And not only is the band back, but all four original members are back, as well!  Worley, Howell, Romero, and Hansen all made a pretty significant splash on the Christian hard rock scene in the early 90s, but like nearly all bands of the time, they were swept away in the alternative/grunge tsunami that would wipe away pretty much the entire hard rock/hair metal scene of the time.  But, a Roxx Records reissue of the band's self-titled debut album apparently sparked a desire for the band to give it another run.

On this new, 5-track EP, the band brings in Eddie Green to handle the lead vocals, with original vocalist, Worley, moving to backing vocals and guitar.  I have been asked why Worley is no longer the lead vocalist, and I do not have an answer to that question...yet.  Perhaps I will get a chance to talk some trash with Larry at some point and get that answer.  For now, however, know that the lead vocals have been left in good hands with Green, who has a deeper, richer tone than Worley typically employed.  But don't think that the band has changed all that much as far as their style and approach, as Fear Not is still, first and foremost, a hard rock band.

The EP kicks off with a big drum intro from Hansen, as "Don't Want None (Come Get Some)" comes crushing out of your speakers!  Edgy guitars from Howell and Worley join the fray, as does Romero's rumbling bass, before the newbie is allowed to utter a sound.  But, when Green breaks his silence, he comes out swinging!  Again, singing in a lower register than Worley used, Green's vocals carry an urgency, an angst, that really powers this track.  The chorus sections are complete with big, gang shouted backing vocals that sound a bit as if an angry mob, rather than a group of musicians, were rioting in the background.  Howell rips through a tasty solo before the final chorus kicks in, and by the time the track wraps, a feeling of "whoa...yeah!" sweeps over me.  This is impressive; what have you been waiting for?!

"Shadows Fade" steps a bit back from some of the modern rock hints that were thrown into "Don' Want None", and sounds a bit more like classic Fear Not, musically.  It is on this track that I finally realize that Green reminds me a lot of the vocal style of Ken Tamplin, both in the range he works in as well as the emotion he packs into his words.  Once again, Howell flashes his guitar talents with an excellent solo, and Green showcases his lung capacity when he holds one particular note coming out of Howell's solo for an extended period of time.  Swirling guitars churn their way throughout the whole song, and again, the drums and bass are huge support structures for this great, great rock tune.

The band slows things a bit for "Carry Me", which hints at being a power ballad, but perhaps with a bit more "power" than "ballad".  Again more in the vein of classic Fear Not, "Carry Me" is a moving song about never having to walk alone when you walk with Christ.  The song, to me, is a rocker's update of the classic Footprints In The Sand poem, and it is executed perfectly.  Green pushes his upper range a bit more here, but more in a rich tenor than in a rafter scraping scream or wail.  Worley's backing vocals are very evident on this track, in particular, and they add a great deal to the feel of the song.  I would imagine this will be released as a single at some point, as it is a song that melodic rock stations, whether terrestrial or Internet-based, will definitely want to add to the mix at some point.

A bit of aggression returns to Green's vocals on the thumping "Love Is Alright", and he takes on a sound that is close to that of EZ Gomer from Jet Circus, if you understand that early-90s Christian metal reference.  Howell blazes through a killer solo here, complete with all the fret board antics one would expect from an axe slinger of his talent.  But as great as these things are, it is the bottom-heavy groove of the track that gets stuck in your brain on this extremely catchy track that has to be in the live set.  It just has to.

"Shipwrecked Hypocrite" closes out this all-too-short EP (just 20 minutes total) in excellent fashion.  The rhythm guitar line is a bit quirky, which I like, and Green again is offered an opportunity to explore his range a bit in this track about living your life without the guidance of Christ to help you set your course as you navigate the waters of life.  Before closing, Howell cuts loose one final time on a truly impressive solo, and once again the interplay between Green and Worley vocally is a treat to hear.

I will be honest, I was very leery of another singer fronting this band that I have followed since 1991 when 3/4 of the guys were in LoveLife (minus Chris Howell on guitars).  And while there is a difference to the sound...how could there not be?...the addition of Green does not alter who Fear Not is or what they do.  This is an impressive return for a band that has been almost completely inactive for more than 25 years, and I get the impression that this is not a one-and-done deal.  The band has said that they plan to hit the road in 2019, and I wouldn't be surprised if there is more to come from these guys.  Again, I don't know the status of Worley doing any lead vocals on the classic material live, but I would definitely go check them out regardless if Fear Not is anywhere near your neck of the woods.  If what they bring to the table live, and in any future recordings, is anything close to the quality of the material here, it just may turn out that it was worth the wait.

Top notch production, a thick, bold sound, and spiritual-without-being-preachy lyrics...For The Wounded Heart is a winner in a big way to start 2019!  Due out in March, you can pre-order your copy through Roxx Productions for just ten bucks!

Rating:  Crankable in a big way!  For The Wounded Heart hits 8 on my rock Richter Scale!

Back To Reviews Index
Posted by arttieTHE1manparty at 9:50 AM