FOREIGNER "The Greatest Hits Of Foreigner Live In Concert" 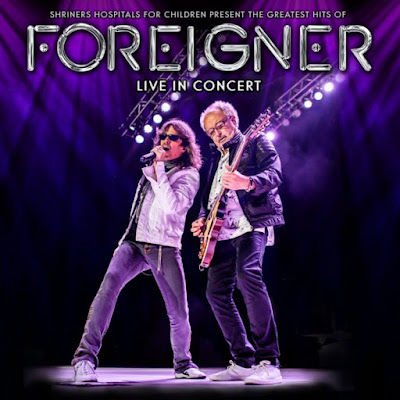 Curse you, Foreigner!  You did it to me again!  Every time you put out a new "best of" or new "live" record, I say to myself, "Arttie, you have 8 greatest hits packages and about a dozen live albums, so you don't need this new one!"  Of course, I always lose this argument with myself if I think there is even the slightest reason to pick up said "new" recording, as Foreigner is so firmly entrenched as one of my all-time favorite bands that I can't seem to help myself.  And dang it if Foreigner didn't go ahead and give me a reason to pick this album up, as it is a fundraising effort for Shriner's Hospital For Children.  Additionally, the band took things one step further and re-recorded one of their biggest hits ever, "I Want To Know What Love Is" with a backing choir made up of Shriner's Hospital kids.

The press for this album states that these are new live recordings, but a handful of them sound like they may have been taken from the Can't Slow Down...When It's Live release from back in 2010.  I got a bit suspicious when Hansen addresses the Tennessee crowd during "Cold As Ice".  If that is the case, this is a condensed version of that live show, as that double album had 16 live tracks, as opposed to just 11 here.  Even if it is the same show, it is fun to hear the nearly-13 minute long jam session that "Juke Box Hero" turns into, and the 7+ minute extended versions of "Hot Blooded" and "Urgent".

As I have stated many, many times, here and in other places, my beef with the current version of Foreigner isn't that they sound bad, because they don't.  They are extremely competent at playing these songs live, and each player here is a talented musician in their own right.  But when people say that Kelly Hansen sounds as good...or better...than Lou Gramm ever did, it drives me up a wall.  It is simply not true.  Hansen is a very good singer, but he simply does not have the same soul and passion for these songs that Gramm had.  And why would he?  He's not as invested in them, as he didn't write them.  In fact, none of the songs from only Hansen-fronted studio album made the cut here, which I think says something.

So, if the album is not the original band, and if these song are versions you likely have already heard (and possibly already own), the only real reason to own this record then, would be the remake of the 1984 classic "I Want To Know What Love Is".  As many fans know, Agent Provocateur, the album "I Want To Know..." came from, is considered to be something of the fracturing point between Gramm and Jones, but the fact that "I Want To Know..." remains the only Number One hit for the band in the US and UK cannot be overlooked.  The song was a monster hit and is a staple of their live performances.  On this album, the Hansen-fronted version of the band went into the studio to re-record the track, with the assistance of a backing choir of kids from the Shriner's Hospital.  Musically, the song is almost note-for-note the same as the classic version, and I'll be honest...I wonder if Hansen simply sang over backing tracks of the original version.  Doesn't matter, I guess, as his vocals are different enough from Gramm's that you can tell it isn't the same identical version.  The children's choir is added into the chorus sections, and while it does add a sweetness to the song, it really doesn't do anything to improve upon the song, so much as it does something to further differentiate it from the original.

All in all, this is simply another repackaging of a band that has been repackaged more times than any band that I can think of off the top of my head.  There are positives to take away, however, as this is a single disc version of some of the best Hansen-era live material that I have come across.  As I already mentioned, there are some very good, extended jam versions of three classic tracks that are worth giving a listen to.  And, the album is a fund-raiser for a very, VERY worthy cause, which is always a good thing.  For people who want everything the band has ever recorded in the studio, this album is an important one, as outside of Can't Slow Down, and the single new studio track, "Save Me", from the 2011 re-recordings package, Juke Box Heroes, this is a rare studio track from Hansen.  And, of course, for the completist, it is a must-own, for obvious reasons.

I know this is available on Amazon, and I have been told it is exclusive to Wal-Mart, as far as in-store purchases go, but I am not sure if that is accurate.

So now, I am going on record as stating that unless they release a new studio album OR a live album from their recent run of shows with the classic line-up of Gramm, McDonald, Elliott, Wills, Greenwood, etc., I will NOT be picking up any new Foreigner packages....

Rating:  As I regularly say about these live packages, the performance is still crankable, so I give it a 7, but there is literally no reason to own this record other than to support the Shriner's Hospital (which is a good enough reason on it's own).