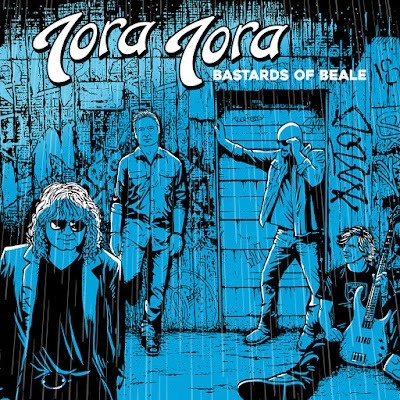 It's sometimes funny to me how the bands that didn't break big manage to stay together and still get along, while the bands that enjoyed huge success can't seem to stand one another and splinter, fracture, of flat out break up within a couple of albums.  Tora Tora falls into the first category, as all four members of the band continue to perform together 30 years after their A&M Records debut album, Surprise! Attack, which, in my opinion, should have been a much bigger album than it turned out to be.  And even if that album didn't have what it likely took to break big, their follow up, Wild America, should have been massive, as it is an excellent record that I feel is highly underappreciated!  Regardless, the band struggled to find success, and their third album, the once-shelved/long-bootlegged/finally-released Revolution Day was the last we would hear from the band outside of a trio of FnA Records releases of demo material from the first two records.

Bastards Of Beale finds the full band reuniting for a brand new album for Frontiers Records.  Due out in late February, this new album brings together everything that fans of the band, or their style, would want out of Tora Tora.  Sounding more cohesive, and with more upbeat tracks, than Revolution Day, the new record sounds like it could have been the logical follow-up to Wild America.  Chock full of Memphis rock-n-blues, Tora Tora pulls no punches on this new record, hitting hard with the rockers and getting soulful on the slower numbers.

The album kicks off with the gritty, nearly sleazy guitar sounds of "Sons Of Zebedee", which finds the band right back in the form they left us in back in 1992.  Corder sounds almost identical to how he sounded on Wild America, with just enough gritty edge added to his otherwise smooth tenor to really drive the bluesy vibe of the track.  The guitar work is solid, and the drums fit the style perfectly, with no extra flash or unnecessary odd timings thrown into the mix.  This is just a straight ahead rocker that fans of Tesla, Tangier, Tattoo Rodeo and the bluesier side of Great White will instantly grab hold of.  But those same fans may not want to get too grabby too quickly, as the best is yet to come!

The next two tracks, "Giants Fall" and "Everbright" both pull in a distinct Zeppelin vibe to the guitars, with a dirty, hard-edged blues sound, and solid rhythm work from both Francis and Patterson.  These are the kinds of songs that Corder's voice was made for, as he seemingly effortlessly delivers a soul-drenched performance on each track.  "Giants Fall" hits hard with that blues rock vibe that Zeppelin did so well, with an undeniably catchy hook, sing-along (wail along?) chorus, and a deep groove that you simply can't get out of once you step into it.  "Everbright" continues that Zep feel, with a sassy swagger that simply isn't found in much music today.

"Silence The Sirens" continues the top-notch blues rock, and it is a sleeper for best track on the album.  The rhythm section here is particularly punchy, especially Francis' bass work, and the sparsity during the first part of the verse sections makes Corder's vocals sound even more haunting than they might otherwise.  When the intensity kicks up, so does the overall feel of the song, and the moaning wail of Douglas' guitar as he exits the chorus sections is spot-on perfect.  Again, an easy-to-sing-along chorus is a big bonus here, and I can envision fists in the air when Corder hits "Silence the sirens!" in a live setting.  The guitar solo here is a big string-bender, also, and there simply isn't anything bad to be said about this song.

A few people may be turned slightly off by "Son Of A Prodigal Son", as there is a definite country nod here, but think more alt-country or Red Dirt country than the slick product that flows out of Nashville these days.  No, Bro Country this is not...classically, Steve Earl ("Copperhead Road") comparisons make sense, or more modernly, a band like American Aquarium ("Burn.Flicker.Die" comes to mind....love this band, by the way...) might be a good line to connect dots with.  Bottom heavy, dirty, gritty, with a cool groove and a tinge of Southern twang in Corder's voice make this another instant favorite of mine...maybe even stealing song of the album honors.  As I have mentioned before, I worked for many years in country radio, and when bluesy, swampy country rock is done right, it is an awesome thing to hear, and Tora Tora NAILS it here!

"Lights Up The River" is the album's big ballad, very much in line with the best the band recorded all those years ago.  If you found yourself hitting repeat on tracks like "Phantom Rider" from the debut, "As Time Goes By" from Wild America, or "Shelter From The Rain" or "Candle And The Stone", two powerful ballads from Revolution Day, then you are going to absolutely love this six minute-long track!  Heartfelt, soulful, bluesy, and stark, the track spends the first minute and a half as an acoustic track before the juice is turned on, and the power of the track hits just that much harder.  In many ways, it reminds me of something like "Song And Emotion" by Tesla, which is one of the more underappreciated tracks in that band's catalog.  Songs like this really make me wish more people would take the time to actually construct songs these days, because when a song is done really well, it doesn't matter the genre (at least to me), it's just a good song.  "Lights Up The River" is one such song.

"Let Us Be One" is a dirty rocker, with a filthy groove to match, and it is the perfect track to ring out of the speakers following something as soulful as "Lights Up The River" was.  Follow that up with the barroom boogie rock of "All Good Things", and this album has already done more work taking the listener from one style to another, without forgetting who the band is musically, than probably 2/3 of the stuff that crosses my desk.  This is what I think Revolution Day was missing to a degree; the up and down, faster then slower moments that found the band exploring various tempos and textures within a given style.  Bastards Of Beale has this quality in spades.

I thought "Rose Of Jericho" would be another ballad, but it is more of a throwback rocker than anything, name-dropping Elvis (well, the "king of Tupelo", anyway), and Tina Turner (albeit as the "queen of Nutbush") across another catchy, bouncy rhythm, with some more solid bass work from Francis, before a scorching solo from Douglas rips through the midsection of this track that also features a rhythm guitar riff that would likely make ZZ Top proud.  Good stuff here.

"Vertigo" is an instrumental number that just rips.  Douglas sounds like he is having a blast on this straight-up hard rocker, that reminds me of some of the stuff that Van Halen was playing around with during the Hagar years.  The drums are excellent, the bass tight and fluid, and Douglas is simply in the zone throughout!  Normally, instrumentals in the middle of an album...well, the annoy me, to be honest...but "Vertigo" was a dose of fun I did not anticipate.

The closing track, which is an odd place to put the title track, is another good rocker, coming as close to the Sunset Strip sound as anything here does, but that is largely due to the guitar solo Douglas chooses to treat the listener to.  Otherwise, this is more of a classic rock-styled track, albeit with Tora Tora's southern sensibilities thrown into the musical mix, as well.  It is a fine closer to an album that I was honestly a bit leery about when I first heard it mentioned.

Twenty-five years is a LONG time to go between albums (1994 is when Revolution Day was originally recorded, never mind when it was released, and I was curious where the band would find themselves.  Thankfully, they found themselves pretty much where they left us.  Unfortunately, you aren't likely to hear anything from this record on any radio...satellite or terrestrial...so you're going to have to track the album down  But, once again, Frontiers has found a quality band to resurrect, and I doubt most fans of the band from 30 years ago are going to find anything to complain about here.

Rating:  A step up from Revolution Day, but perhaps still a step behind Wild America, Bastards Of Beale is crankable, nonetheless!  Crank this to 7.5!

Back To Reviews Index
Posted by arttieTHE1manparty at 6:09 PM