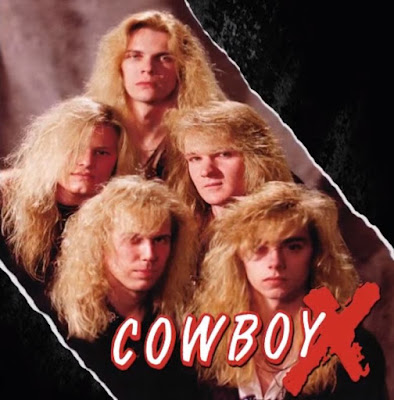 Nebraska is not known as a music mecca, by any stretch.  Trust me, I have lived in the state my entire life, and outside of 311, and to a lesser degree Emphatic, Through Fire, and Arson City, there simply aren't a lot of hard rock/metal bands that have made much of an impact at the national level.  Regional?  Sure, there are a few.  Zwarte springs to mind, as does Paisty Jenny (more on them in a second). But generally speaking, most hard rock/metal bands in Nebraska, even the good ones like Slantpiece and Empire's End, tend to have local followings, at best.  But such is the nature of things, especially in the music industry of today.

But in the late 80s and early 90s, there were a handful of Nebraska bands that seemed to be on the cusp of doing something on a national level.  One of those bands...which was actually the product of a couple of other bands...nearly made a dent in the national scene.  That band was Cowboy X.  FnA managed to track down the original recordings of the six tracks, all of which were originally recorded in a basement recording studio...on tape no less...in 1990 for a label called Direct Hit Records, the first six tracks make up an EP that was going to be shopped to the big labels before the change in the musical landscape wiped out pretty much any and all unsigned bands of the genre...and a lot of them that did have deals, as well!  The initial run of the EP sold well enough to sell out, but I have never come across a version of it on vinyl or cassette anywhere, so I'm not sure how many copies were pressed.  In addition to the EP tracks, there are also three additional songs that never made it to the full production stage, so they are included here in demo fashion, along with three repeated tracks with both studio and demo versions.

Musically, Cowboy X was somewhere between hair metal and more traditional metal for much of the material here.  Take for example the two best tracks here, "Hard Times" and "Jealousy".  "Hard Times" is a straight ahead rocker, with a metallic flair to it.  There is a decent amount of flash to the guitar, and the catchy chorus is definite sing along material, but it's not as poppy as a lot of the hair metal that was being pumped out in 1991-92.  "Jealousy"...man, what I would give to hear this with top notch production!  This is a GREAT song that I think would've been the band's big break track had more people been able to hear it.  Really good songwriting, a great guitar solo, strong bass work from Cotton, and a real showcase of Lee's vocals are all packed into one track that teases at being a ballad for a bit before it morphs into more of a mid-tempo power rocker. Musically, the song has some definite Dokken or Hurricane qualities to it, sounding more like a early-to-mid-80s melodic metal track than an early 90s hard rock track. The guitar outro is excellent, as well, and unfortunately it is hard-faded when it sounds like there is a lot more musical work that is being done when the mixer/producer decided to pull the plug on the track.  Seriously, I dig this track A LOT.

The album's opener, "Dreamin'" is a commercial, melodic hard rocker with a screaming guitar that reminds me of the type of rock that David Lee Roth put out on his Skyscraper album.  "Can't Stop Rockin'" feels a lot like a Dangerous Toys song with an early LA Guns chorus section.  Lee does his best Jason McMaster impression vocally on the verses, and the gang shouts in the chorus are excellent.  I could've done without the stock audience sounds being thrown into the mix, but again, this is a really fun song that would have drawn some attention had it come out in, say, 1989, instead of 1992.

The ballad of the record is "Higher You Get", and it is a decent song.  The guitars are a bit tinny sounding, again the result of low budget recording, I would imagine, but the songwriting has a very "Something To Believe In" feel to it.  The bass is a solid presence here once again, and the percussion is nicely done, setting a nice tempo and filling well without coming across as overpowering.  Lee works more in the lower register of his vocal range here, and it fits nicely.  Once again, there is some solid solo work done here (from which guitar player, I am not certain), and I think with bigger, fuller production, this would've been one of those MTV power ballads that were almost constantly in rotation.

"Need To No" (that's the band's spelling, not mine) finds the band back in that Dangerous Toys vibe, and this is a style they work very well in.  It feels comfortable and the sound is one they definitely are able to really pin down.  Lee's voice is perfect for this type of rocker, and the simple-yet-catchy songwriting is right in the wheelhouse of this band.  I very much wish I had been able to catch Cowboy X when they were out touring this music, because it is obvious these guys were convicted in what they were doing and they had a decent amount of talent that I think would've really come across in the live setting.  Additionally, I think a really good studio could've done SO MUCH with three or four of these songs that I think Cowboy X could've been more than just a regional flash in the pan.

Speaking of the studio, the production here is decent, but not spectacular; it is definitely 80s small label/indie quality, and you can tell the source material is tape, not digital.  The performances are generally very good, however, and the energy of the songs makes up for some of what is lacking in the production area.  Lee's voice suits the music very well, and fans of Paisty Jenny will be able to pick him out immediately.  The guitars are solid with several good intros, outros, and solos thrown in, particuarly on "Dreamin'" and "Can't Stop Rockin'", as well as on the previously mentioned "Jealousy".  And the bass, particularly on "Jealousy", is a very strong voice in the band, which was not always the case in the 80s/early 90s, as G2G readers are likely fully aware of.  I applaud the bass work done here.

The demo material for the full-production songs doesn't need to be included, honestly, as the finalized versions of "Dreamin'", "Hard Times", and "Need To No" are far superior versions. I get the need to try to get to at least 10 songs on a release, so I don't fault FnA for including these, but the only ones necessary are "Nice And Nasty", which is not as sleazy as it sounds, but still a decent song, "Runner", a rocker which is very poorly mixed with the vocals WAY out front,  and "Don't Give Up", which is very rough but had a lot of promise as an uptempo rocker.  None of these tracks has a fully-produced version elsewhere on this effort.

I happen to know Gregg Lee, so I look forward to getting the chance to talk to him about this release and about what was going on with the Nebraska hard rock/metal scene back in the day, as well as what's up with his most recent rock gig, fronting Paisty Jenny.  Keep an eye on the Talkin' Trash section for an interview with Lee in the very near future!

For those of you who, like me, love hearing bands that others haven't stumbled across, this little package from FnA is a solid pick up.  My understanding is there is a pre-order version available that is signed by all of the original members, which would be pretty cool.  Check it out and pre-order the package at the FnA Records site!  By the way, I understand FnA will also be releasing the Airstrike album, which is another Nebraska-based hard rock band from the 80s, which is where Lee got his start.

Rating:  A nice collection from a band that may have had something going had the musical tide not turned on them.  Rock this at 6.5!

Back To Reviews Index
Posted by arttieTHE1manparty at 4:01 PM