ARSON CITY "Hell Of A Ride" 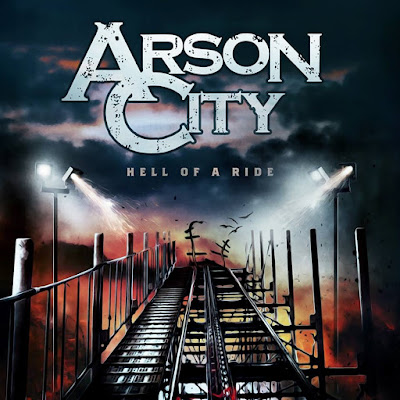 Omaha's Arson City returns with its first release in nearly three years as they follow up the excellent Horror Show record from 2015.

The disc starts with an instrumental section called "Prelude", and while I have made it well known I am not particularly fond of intros...or even instrumentals, in most cases...I do have to admit that I am going to make an exception here for a couple of reasons.  First, the band makes the wise decision to run tracks 1 and 2 seamlessly into one another, so they can be taken as one whole track OR track 2 can be started independently without it sounding like something is missing.  Job well done!  The other reason I am going to allow Arson City a pass on "Prelude" is because it is so beautifully performed.  What starts off as a piano piece from Beckenhauer picks up intensity with the addition of drums, the bass, and some harmonic guitars that remind me of something Savatage might have done in the 80s.  Really good stuff here.

The intensity kicks up even further where "Prelude" and "Hell Of A Ride" meld together, as some gritty rhythm guitars from "Doctor" Beckenhauer join the fray grinding the song to the point where The Mayor jumps into the mix, snarls "Here we go!" and launches the song into a full-throttle rocker.  If you are even remotely familiar with the Horror-Punk backstory of Arson City and its characters, you know that Wilson's Mayor character was brought up in the streets and as a member of a gang called the Horror Squad.  To that end, "Hell Of A Ride" sounds lyrically like it could be The Mayor's origin story, as the opening lines find the song's protagonist waking up under a bridge as a train roars overhead before going on to describe the life that he has lived.  Perhaps it is merely coincidence that it works out in my brain that way; regardless, this big, anthemic rocker is so insanely catchy that it took me about a dozen listens before I actually managed to get past this track.  The songwriting of the band continues to grow and mature and develop, but great songs are meaningless without talent to execute those songs, and Arson City proves from the get-go that they are more than just a really good local band with a kick ass live show.  The guitar work here is top-notch, from Beckenhauer's rhythm work to the leads of "The Dealer" DiBaise, supported by excellent drum work from "The Enforcer" Denker, and pulse-pounding bass from "The Con" Oliver, all of which come together with just enough modern production and programming to create what I feel is probably the pinnacle of this band's creativity up to this point.  But even then , the band throws more into the mix!  There is also a touch of prog running through the veins of the song, with some symphonic-styled keys dropping into the mix in places, which gives the song a fullness of sound that simply adds to the completeness of this track. Simply an amazing track that always seems to find me hitting repeat multiple times.

"Business As Usual" kicks its way through the speakers next, and if anything, is a bit more aggressive than "Hell Of A Ride", which seems crazy when I write it.  The drums from Denker are particularly strong here, and I don't think enough gets said about what this beast brings to the sound of this band.  Interesting rhythms, speed, precision, and the thunderous heartbeat of Arson City, the drums here are produced absolutely perfectly and are a key element here, not just the foundation upon which the songs are built.  Another song with a dark tale to tell, "Business As Usual" tells the story of life in the streets of Arson City, as a strung-out, would-be armed robber gets gunned down by a liquor store owner, and a hard-working single mother puts a bullet through the skull of a wanna-be mugger/rapist.  Serious stuff, to be sure, but "out here death seems so casual, [but] its just business as usual" in Arson City.  Wilson's vocals are absolutely perfect for such dark subject matter, especially in the quiet moments before the chorus sections kick in, when Wilson drops his range even further, intoning "life can change in the blink of an eye".  Once again, buzzsaw guitars and a tight rhythm section are supported by some modern elements, but no matter what you want to label it, this is simply superb modern hard rock/metal that deserves to be heard.

"Pushing Forward" continues the trend of excellent rockers, with a killer intro that features some haunted carnival ride keys at the outset, followed by more huge, pounding drums working in a kind of counter pattern to those of the rhythm guitars, leaving pretty much no empty space between notes right from the outset.  Big, gang-shouted vocals punctuate parts of the verses as well as jumping into the chorus sections on the "pushing forward" parts, while Wilson's angry, lower-range snarl drives the listener through the "nothing's gonna stop us, all-for-one-and-one-for-all" sentiments of the lyrics.  There are some interesting, discordant guitars thrown into the mix in a couple of spots as well, and suddenly this album is three-for-three as far as great songs go.

"One Of These Days" is a slightly slower, slightly off-kilter rocker, similar to something Theory Of A Deadman might come up with, but much darker, heavier at the bottom, and interwoven with a jangly, horror film feel to it.  A piano leads us in once again, along with the sounds of a thunderstorm, as Wilson drops low into a storyteller vocal approach for the first few lines before being interrupted by the dark bounce of the rhythm section.  After two runs through the chorus section, a big, screaming lead solo from DiBaise that leaps straight out of the late 80s metal scene (not hair metal...heavy metal).  I like the feel of this track and I hope that it is one that the band incorporates into their live set, as I think its a great change of pace track that will keep things from becoming too predictable.  The quirky drum patterns give the track a syncopated feel, offset by the chugga-chugga-chug style of the rhythm guitars, all layered over that piano that stays with the song throughout the length of the track, and the thunderstorm that exits the song.

"Let's Go" pushes the pace back up once again, although we are still not into full break-neck speed territory by any stretch.  Still, this hard-charging modern rocker is fueled by crunchy guitars, another atypical drum pattern that has to be fun for the band to work around., and a strong presence from Oliver on bass, which can literally be felt throughout the track. Following the second chorus there is something of a breakdown section fueled by Beckenhauer and Oliver, PLUS a guitar solo from DiBaise before bouncing right out and back into the chorus song for another run through.  Again, super catchy and so unique when compared to so much of what is heard in rock today.  Good, good stuff.

The disc closes all too soon with...believe it or not...a Journey cover!  Yep...you read that right.  Now, first off, Wilson and Perry will never be confused with being vocal twins separated at birth, and Arson City and Journey have pretty much nothing in common musically, but I can't wipe the smile off my face when I hear this track.  The guitars are grittier, edgier, more urgent, and tuned far lower than anything Journey likely ever attempted, and the unmistakable keyboard intro carries a dangerous, angry edge not found in the original.  The rhythm guitars out of the keys on the intro are also cut a bit short from the Journey version, but there is no denying that the band is working hard to remain faithful to the original song, while also remaining faithful to who the band is and what they are all about musically.  The guitar solo from DiBaise is relatively simplistic at first, but he gets to run the frets pretty quickly before the solo gives way to a final run through the chorus, and the rhythm guitars have a punch to them not found anywhere in Journey's storied catalog.  One of the best touches here is the echoed lines from Wilson...done in a deep, gravelly, whisper-snarl manner...on the verses, which gives the song a darker feel than the original.

Produced by Beckenhauer and Wilson, the album sounds amazing and professional despite the fact that it is a true self-release, with no label backing at all.  The disc comes in a cardboard sleeve, with the artwork at the top as the front cover, with the back being a continuation of the roller coaster artwork, a track listing, and some skeleton notes regarding credits and so forth.  If you're really nice to the guys, perhaps you can get one from the band that is signed by Patrick, Mark, and the Three Matts (which my physical copy is; the above photo is from the press kit).

As any review of Arson City must do, I have to include a note about the live performance from these guys.  If you have never had the chance, you absolutely need to see these guys in the live setting, whether as an opener or as the main event, as they fully deliver every time they take the stage.  The ultimate way to experience the band is at their annual Citizens Ball every October in Omaha, as the full Horror Punk show is brought to life, with the full stage show, the Horror Squad, the make-up, the costumes, and the fan participation at a peak!

Follow the band at https://www.facebook.com/arsoncity/ for more information about getting your hands on this CD.  Yes, it is a quick 25 minutes, but it is well worth the investment and one of the truly great releases of the year, label-supported or otherwise!  Every time these guys put something out, the quality increases and the bar for the next release is set even higher.  Hopefully we won't have to wait three more years to see if they can top themselves and this excellent effort!

Rating:  I don't see any way these guys don't end up with the G2G True Indy Album of the Year with this cranker!  Turn it way up to 9!