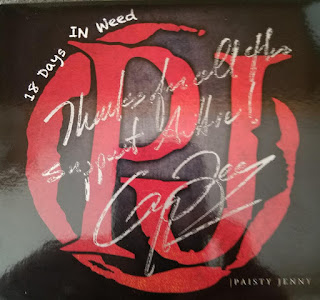 Lincoln, NE rockers, Paisty Jenny, have finally released a new album, their first since 2011's Head In A Haze.  The new record, 18 Days In Weed, was recorded with multi-platinum producer, Sylvia Massy (Sevendust, Tool, System of a Down) and Michael Beck (Jake E. Lee's Red Dragon Cartel), and features a bigger, richer, heavier sound than these hard rockers have ever managed to capture on an album, coming across much closer to their live sound than they have in the past.  I say this with great confidence, as I have seen the band perform multiple times, including at SkullFest a few years back.  Combining a love for 80s arena rock with modern crunch and edge, the band finds its way into that category occupied by bands such as Hinder, Theory Of A Deadman, and even Velvet Revolver to a degree.

The new effort kicks off with the "title track", if you want to call it that.  Basically, "18 Days In Weed" is a drum cadence from Lovette (along with some big drum kicks) with some guitar riffing running below with what sounds like some sampled emergency phone call audio laid over the top.  All of this essentially serves as the lead-in for the first real song on the album, "Criminal".  For fans of the band, yes, this is the same song that was released as a single back in 2013.  However, prior to this album, the song was never available on CD that I am aware of, so it is nice to have it included here.  For those who are not aware of the band, "Criminal" was up for Grammy consideration in multiple categories in 2014, which is pretty amazing for a regional band like Paisty Jenny.  However, if you have heard the track before, you will still need to hear the new version, as it is far heavier and punchier than the original.  Crunchy guitars blast the song to life, joined by big arena-styled drums and a strong bass presence from Matthews.  Lead vocalist, Gregg Lee brings his sassy snarl to the vocals on this song that pretty successfully straddles the 80s arena rock and modern rock styles.  Liberty lays into a nice, melodic solo, and the entire band contributes to the track with layered backing vocals on the catchy-as-heck, sing-along chorus.  Yep, you've heard it before...but never like this, and "Criminal" officially gets things rolling in a big way for this band and this record.

"High" comes out swinging, as well, with more hard-hitting guitars and punchy drums.  Lee's vocals on the verses are performed through a megaphone (check the video below), but the chorus is much cleaner and has a far more melodic feel to it than the verse sections do, feeling akin to the trippy melodic rock of a band like Enuff Z'Nuff.  Again, there's a really good guitar solo embedded in this track, along with a nice vocal bridge that showcases Lee's melodic singing ability, as opposed to the snarlier, edgier vocals he utilizes on much of the band's material.  I would have to say that this is my second favorite of the new tracks here, and I really like the way the band experiments with a variety of styles and sounds here, showing a willingness to expand upon the tried and true PJ sound.

"Let It Go" is another excellent track here that longtime fans of the band may have heard in the live setting.  Introduced by a short, hip-hop sounding lead-in from Matthews on vocals, the song quickly kicks into full-on rocking mode, once again featuring a nice juxtaposition of melodic chorus sections set apart from edgier verse portions.  Again, Lee sounds strong and comfortable with both styles of vocals here, and contributes some crunchy rhythm guitar lines, as well.  I have to continually give props to Liberty for his work on the lead guitars here, as each song on 18 Days... features a strong solo, whether its a melodic string bender such as on the one found here, or a more metallic-sounding solo such as the one found on the next track, "Hollywood".  Truly strong work from a guy that honestly bolsters each of these songs with an extra shot of musical adrenaline.

"Run To Me" sounds very much like a track that Warrant would have delivered in the 80s, with Lee delivering a particularly impassioned vocal performance here.  As much as I think "High" is a great new song, "Run To Me" is just that much better to my ears.  This is possibly the best written song I have heard from the band, and the "Don't be afraid to try your wings..." bridge is an excellent lead in to another big guitar solo from Liberty.  The beauty of a track like this is that while 30 years ago, this song would have hit the radio, it also proves the relevancy of great songwriting.  A great song is a great song, and even today, "Run To Me" stands as the strongest entry on an overall strong album from an eastern Nebraska band that you really need to seek out.

"Ashes" is another older song finding its way onto a CD for the first time, and it brings the album proper to a close.  Much like "Criminal", the band neatly and deftly manages to live in both the 80s arena rock and current modern rock world, thanks in large part to a big, arena-styled drum sound, strong rhythm and lead guitars, and Lee's vocals, coupled with a bigger than the 80s bass presence and better production than was often the norm in the 80s.  Lee adds a screech to his vocals for good effect in a couple of places here, and I would imagine that this song is one that brings the fans to life in a live setting.

"Run To Me" is given an acoustic rendering to end the album, and while it is definitely a song that lends itself to this style, I feel like it was an unnecessary addition, as the original is particularly strong.  I will say that hearing the acoustic guitar work here is a treat, as it is very clean, with both a rhythm line and a melodic line running simultaneously in places.  I'm assuming both Liberty and Lee played their respective guitar parts here, but I am not 100% certain.  Far shorter than the original version, the vocal bridge is dropped, as is the final set of runs through the chorus, this version doesn't quite reach the three minute mark, while the original tops out at slightly more than four minutes.

The packaging here is pretty good, especially for a completely self-produced effort (Direct Hit Records is the band's own label).  The digipack is a double fold with multiple color photos, a thank you section, and basic recording info.  There are no lyrics here, but nothing the band sings is hard to make out, regardless.

The album dropped on March 30, and I believe it will be available shortly on the band's website.  For now, the digital versions of singles "Let It Go" and "High" can be found on the band's CDBaby page, as can older versions of "Criminal" and "Ashes", and their previous album efforts.

Overall, I have to say that 18 Days In Weed is a very fun listen and a solid representation of the band's energy and sound from the live setting.  When I mentioned this to Lee the other day, he told me, "Amazing what happens when you hook-up with a couple of world class producers!"  I am inclined to agree with him, for as solid as Head In A Haze was, 18 Days In Weed is leaps and bounds better.  Hopefully the band will be in your neck of the woods at some point so you can snag a CD and catch their live performance so you can leave the show "PAISTED!"

Rating:  A definite cranker here!  I have no issues giving this a 7.5!  I just wish it had been a song or two longer, with at least one more new track.

Back To Reviews Index
Posted by arttieTHE1manparty at 5:53 PM